Well, the holiday to Japan is over - all that remains are the memories and photos! Eating in restaurants was a challenge at times, although we looked for places which at least had an English menu, even if no-one spoke English. We coped for 10 days with only one meal which disappointed us. We ate tempura cooked freshly for us piece by piece, while we sat at the bar; mastered the art of ordering our food at a ticket machine; decided we both preferred soba noodles to udon; ate Hide beef in Takayama (the local equivalent of Wagyu beef) and amused endless staff and customers while we got accustomed to chopsticks again!

One of our favourite cold drinks in Japan, bought from vending machines which seem to stand on every street corner, was lemon tea. I'm not sure whether the tea was green tea or regular tea, but it inspired this lemon and green tea marble cake. This time I used enough green tea for the flavour, as well as the colour, to be noticeable in the cake. 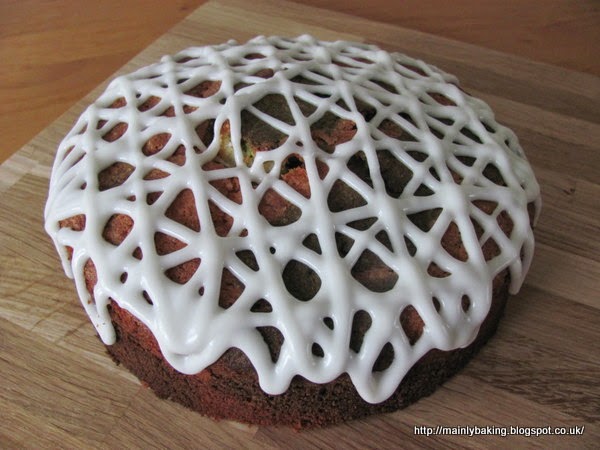 Method:
Preheat the oven to 170C/150C fan/Gas 3.
Prepare a 18 or 20cm (7 or 8") diameter round cake tin. I prefer to use a non-stick springform tin, but still line the base with a circle of baking parchment.
Mix the flour and ground almonds together in a small bowl.
Cream the softened butter and sugar together until light and fluffy - an electric mixer is best for this, but it can be done by hand. 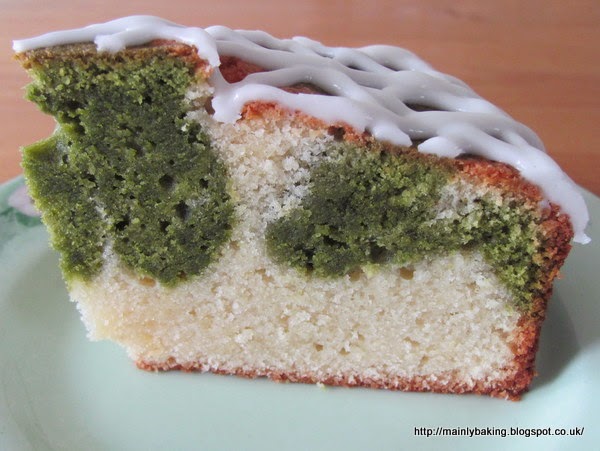 Beat in the eggs, one at a time, with a teaspooon of the flour/almond mix, to prevent curdling. Then sieve the rest of the flour mix over the surface of the cake batter, tipping in any ground almonds which won't go through the sieve mesh. Fold this in until evenly mixed, adding enough milk as you do so to give a soft dropping consistency (about 3 tablespoons).
Divide the mixture in two, and stir the lemon zest and oil into one portion. Add the green tea powder to the other portion of cake batter, adding a little more milk if necessary, to keep the consistency the same as for the lemon flavoured portion. 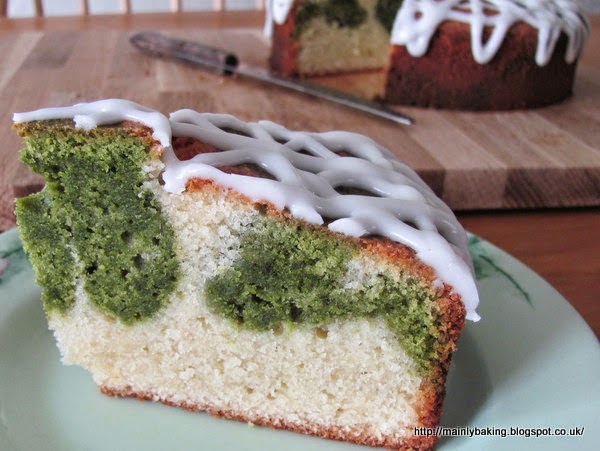 Place alternate dessertspoons of the two mixtures into the cake tin, trying to get at least two layers, with green batter above lemon, and vice versa, on the upper layers, and gently easing the cake mix into place to avoid large gaps in the mixture. Tap the tin to settle the cake mix into any gaps that have been left, then use a skewer or a knife to swirl through the cake mix to marble the two mixes together.
Bake for 65-75 minutes, until a test probe comes out clean; cool in the tin for 15 minutes then transfer to a wire rack to cool completely.

I used icing sugar and lemon juice to make a glacé icing which was drizzled decoratively over the cake. This was a delicious cake, with the lemon and green tea flavours complimenting each other well, and just enough green tea to give the distinctive bitter taste.
Posted by Suelle at 11:44 2 comments:

There was only one thing wrong with these bars - their size! The finished traybake was less than 1cm deep - so each bar was not much thicker than a digestive biscuit. The idea was great - a lemon cheesecake filling between two layers of biscuit crumb - and the flavour was fine, but the thin layers meant that the crispness of the biscuit and the softness of the cheesecake blended into one, with not enough differentiation of textures. 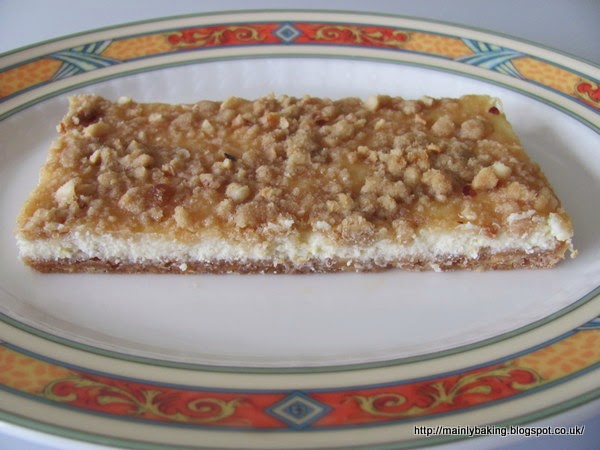 I followed this recipe, which was also in one of my cookery books (The Ultimate Cookie Book). The only difference was that I used hazelnuts instead of pecans. The recipe says it makes 18-24 bars, depending on size. It says a lot for portion sizes that I cut the bar into 8 pieces, and still thought them stingy! Smaller bars would be a dainty addition to a tea table, where people want to try a little of everything, but as a dessert I want a decent sized portion!

We're off to Japan for a touring holiday in a few days time, so I'm unlikely to have time to take part in any of my usual baking challenges this month. Hopefully things will get back to normal next month. Last time we were in Japan, we actually lost weight - unheard of when holidaying, usually, but I think the portion sizes in restaurants reflect the fact that the Japanese tend to be much smaller than the average British person. If things go the same this time, at least I won't be worrying about losing the extra weight when I get back!
Posted by Suelle at 11:09 2 comments: