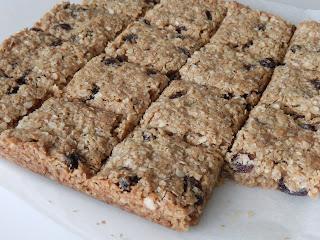 For some long forgotten reason, I have buckwheat flakes in my store of baking ingredients and they need using soon. They look like rolled oats, so I wondered if they would make good flapjacks. I was relying on them having the same sort of absorbency as rolled oats, but in case they hadn't, I decided to use them 50:50 with oats for the first trial, and take a tip from Lynn Hill at Traditional Home Baking, and add 50g of plain flour to my usual recipe. This makes the flapjacks softer and less sticky, so if absorbency was a problem, extra flour would help.

In case the flapjacks didn't work well, I used some of the cheapest add-ins that I had - sultanas. I also had a couple of lemons in the fridge which really needed using up, so added the zest of both of them to the mix. This turned out to be a flavour combination which worked really well.

I needn't have worried. Although the flapjack mixture initially looked wetter than usual, everything was absorbed during baking and the flapjacks emerged from the oven looking as good as ever!

I tasted both the buckwheat flakes and oats raw, and although some online sources describe buckwheat as nutty and slightly bitter, I thought they were both equally bland and tasteless. So although buckwheat probably isn't something one would use to add flavour to anything, it does have nutritional benefits. It is gluten-free, high in fibre and magnesium and relatively high in protein.

The recipe is very simple: 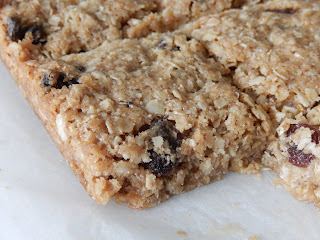 Melt together 160g butter, 70g golden syrup and 100g sugar. (I usually use light muscovado, but only had soft brown sugar in stock - even white would do!) This can be done in a bowl in the microwave, or a pan on the hob. Only heat until the butter has melted; don't let the mixture boil. To this mixture add 120g rolled oats, 120g buckwheat flakes (or use all oats), 50g plain flour, 100g sultanas and the finely grated zest of 2 lemons. Mix well until everything is combined evenly. Tip into a 20cm square shallow baking tray, lined with baking paper, spread evenly, then press down firmly. Bake at 180C/160C fan for 25 minutes, until golden brown.
Rest for 5 minutes, then mark into bars or squares with a sharp knife. Leave in the tin until cold - they may crumble if lifted while warm

This gives soft, chewy flapjacks - if you like them crisper, bake for a few minutes longer. If you like sticky flapjacks, leave out the flour.