Blondies with a Hazelnut Butter and Cocoa Filling 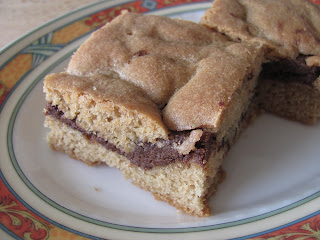 I bought a jar of hazelnut butter flavoured with cocoa. My thinking was that it would be a healthier treat than Nutella, as it only had a little added sugar (10% honey) and it was also safe to have around when my daughter visited, as she has a peanut allergy, and worries about cross-contamination if she sees I have any peanut butter in the house. The problem was that I didn't really like it. Although the hazelnut flavour was very good, the texture was grainy and it just wasn't sweet enough for me when eaten on plain biscuits - I guess I'm a Nutella girl at heart!

Never one to throw away food if it can be used somehow, I decided that it would be ideal cooked into something sweet, so decided to use it as a layer in the middle of some blondies instead of adding chocolate chips. The plan worked very well, although the blondie recipe I chose was more like cookie dough than blondie batter. The hazelnut flavour came through strongly, and the blondies looked quite attractive too. If I made them again, I think I would add some small chocolate chips too, to increase the chocolate flavour. The hazelnut butter alone didn't have enough chocolate-ness. 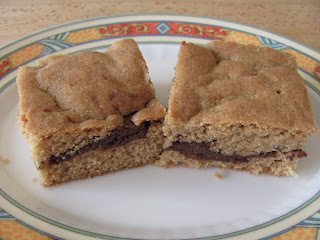 Method
Line a 20cm(8") square shallow baking tin with parchment. Preheat the oven to 180C(160 fan).
Beat the butter, sugar and vanilla extrat together until well blended and creamy.
Beat in the eggs, one at a time, with a teaspoon of the flour.
Sift in the rest of the flour and the baking powder, and beat until well mixed.
Spread 2/3 of the mixture into the baking tin - it helps to wet the back of a metal spoon to spread the thick dough more easily. 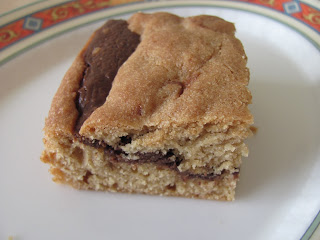 Spread the hazelnut butter over the dough, to within 1cm of the edges.
Drop teaspoonsful of the rest of the dough evenly over the surface, then use a wet spoon to flatten and spread the dough as much as possible - it isn't necessary to completely cover the hazelnut butter layer.
Bake for 35 - 40 minutes, until the blondie dough is risen and golden brown.
Cool in the tin, then cut into fingers or squares. 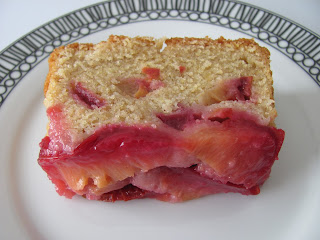 This cake was going to be a half-sized attempt at Dan Lepard's tried and tested Stone Fruit Yogurt Cake, until I realised that I was lacking the necessary semolina. Not one to be easily thwarted, I used polenta instead and carried on!

I wouldn't usually buy fresh plums at this time of year, as they have been trekked halfway round the world, but the checkout till at Waitrose kindly printed out a coupon for a pack of 6 'Perfectly Ripe' plums at half price. This recipe used three plums - they were quite large, weighing about 80g each, I seem to remember.

One of my baking books tells me that a 20cm round deep cake tin is equivalent to a 900g (2lb) loaf tin, so I hoped that half the quantities in Dan's recipe would be OK in a 450g(1lb) loaf tin. It was a near thing - the batter filled more of the tin than I was happy with, but fortunately the cake didn't rise too much. I made a couple of slight alterations to the recipe, but nothing that altered it substantially from the original. 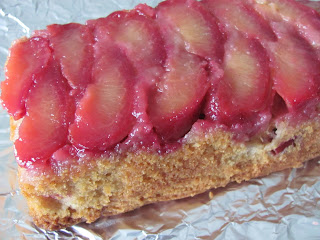 Method
Line a 450g loaf tin with foil, pressing it well into the corners without tearing it, and grease with a little of the extra butter. Dot the remainder of the extra butter over the base, and sprinkle over 1 teaspoon of caster sugar.
Preheat the oven to 180C.
Halve and de-stone the plums, and cut each half into 4 slices. Arrange about 2/3 of the plum slices in the base of the loaf tin, and sprinkle over another teaspoon of sugar. Chop the remaining slices of fruit into small pieces.
Mix the flour, polenta, cinnamon and baking powder together in a small bowl.
Cream the butter and sugar together until light and fluffy, then beat in the egg and vanilla extract, adding a spoonful of the flour mix to prevent curdling.
With the mixer on it's slowest speed, stir in the yogurt, followed by the rest of the flour mix.
Fold in the remaining chopped plums with a spoon, then transfer the batter to the baking tin. 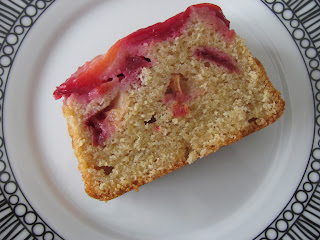 Bake for about 60 minutes, covering for the last 15-20 minutes if the cake seems to be browning too quickly. A test probe should come out clean of cake batter, although you might hit a piece of fruit which will make the probe look damp.
Leave for 10 minutes, then turn out onto a plate and carefully peel away the foil. If any of the fruit topping becomes dislodged, it can be gently put back into place. Cool before serving.

The slices of plums on top of the loaf were a really pretty pink colour - it was lovely to photograph something which wasn't brown! There was just enough cinnamon to taste, without it overwhelming the plums, which were both sweet and sharp and gave the cake a fresh taste which I've been missing all winter!

Incidentally, I was pleasantly surprised at how tasty the plums were, but I think I still prefer to buy fruit as locally and seasonally as possible. 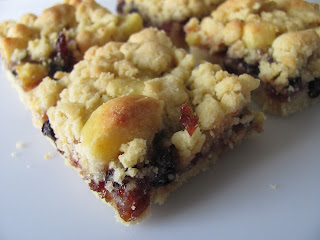 Another variation on my favourite filled shortbread traybake, using one of my favourite seasonal flavour combinations - mincemeat and marzipan. This recipe is so quick to put together that it could easily be made instead of mincepies at any time over the festive season, but I made it to use up the Christmas leftovers.

The original recipe, from Sue Lawrence's 'On Baking' used dates, currants and ginger in the filling, but I've made several versions in the past, keeping the shortbread part of the recipe the same and varying the filling. The butter and sugar in the recipe are melted together before being added to flour and semolina, and the resulting crumbly dough is just scattered and then pressed into the baking tin. Using prepared mincemeat, rather than cooking the filling, means the whole recipe can be assembled and into the oven in about 5 minutes - much faster than messing around with pastry, or even traditional shortbread. 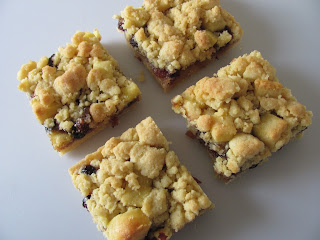 Method
Preheat oven to 180C/160C fan. Line a 20cm (8") square baking tin with parchment.
Weigh the flour and semolina into a large bowl.
In a small pan, melt the butter and sugar over a low heat, just enough to dissolve the sugar. Add to the flour mix and stir together until evenly combined.
Scatter 2/3 of the dough over the base of the tin and press down firmly to give an even layer. Smooth the surface, using fingers or a spatula.
Spread the mincemeat over the dough, leaving a margin of 1cm around the edges. Sprinkle over the cubes of marzipan. 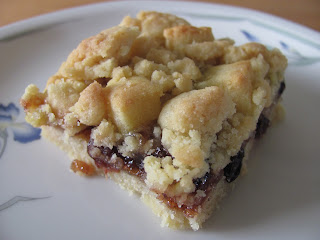 Cover with the remaining dough mixture - the easiest way to do this is to crumble the shortbread over the surface, using fingers, then press down lightly with the palm of your hand.
Bake for 25 minutes, or until golden brown. Cut into squares as soon as the tin is removed from the oven, but cool completely before lifting the shortbread from the tin.

The shortbread was crisp and buttery, but not too sweet, which meant that even with commercial mincemeat and marzipan added, the squares were not over-sweet. My mincemeat contained cranberries which also added to the flavour.