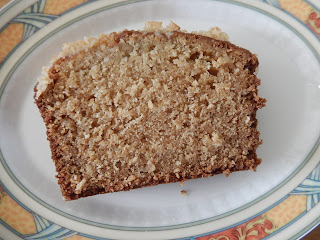 I'm not sure what to think about Helen Goh's Anzac cake (from the Australian Good Food site), which is inspired by the ingredients of the traditional ANZAC biscuit. It's a lovely close-textured, moist cake, but without the topping, the flavour really wasn't anything special. The coconut milk used in the cake batter wasn't enough on it's own to give a really strong coconut flavour.

The problem was, the topping didn't work well for me! In fact, most of it ended up on the floor of the oven as it ran off the cake. The flavour was fine - a sort of caramelised coconut macaroon - but as well as just sliding off the cake, what was left didn't stick well, making the cake difficult to cut and serve.

I think part of the problem may be that UK baking tins are different in size to Australian tins - the recipe states using a 1kg capacity tin, whereas standard UK loaf tins are 450g or 900g. The difference didn't seem enough to matter to me, and indeed, it didn't for the cake itself. However, the cake rose above the top of the tin, and domed in the middle, meaning there was nothing to stop the topping sliding off as it warmed up again in the oven. 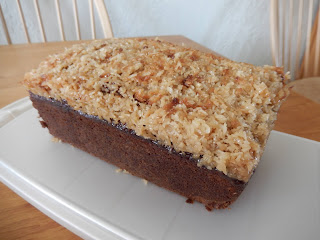 I'd  like to repeat this cake, with either something extra in the cake, such as a spice, or some dried fruit, to make it better to eat without the topping, or with a different sort of topping. This could be a coconut frosting put onto the cooled cake, but I also wondered if a more traditional macaroon topping, adding egg, would stay in place better, both during and after cooking.
Posted by Suelle at 14:18