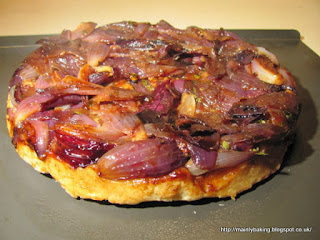 When I read in the Daily Telegraph that this recipe was considered one of Nigella's best 10 recipes of all time, I had to give it a try. This Supper Onion Pie is similar to a red onion tarte tatin, except that a cheese scone dough is used instead of pastry.

The recipe was quick and simple to put together - the longest procedure is slowly caramelising the onions until they are soft and nicely coloured. The onion layer is flavoured with thyme and the cheese scone dough also has mustard in it for a bit more flavour. I cooked the onions in the same skillet that I used to bake the pie in, which made things even simpler - less washing up! 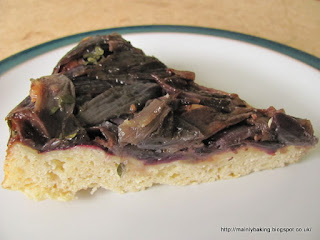 I found this a pleasant dish to eat, but nothing more outstanding than that. The scone dough was quite thick compared to pastry, and I thought it needed more flavouring - more mustard or some herbs maybe, or even some dried chilli flakes. My husband was even more critical - I was told in no uncertain terms not to make it again unless I could make it more flavoursome - he suggested leaving out the cheese and using garlic and coriander leaves in the base and some suitable spices in the onions.

I don't have a lot of Nigella's recipes in my regular repertoire, but I don't think this is getting into our top 10!

Apologies for the photo of the whole pie - it had to be taken in artificial light. The last couple of months has been so dismal and dark that it's been really difficult to get enough natural light photograph anything well, even in daylight - roll on Spring, and longer days!

what a brilliant idea... i'd never heard of this before but it's great, like an onion pizza pie. Gorgeous!