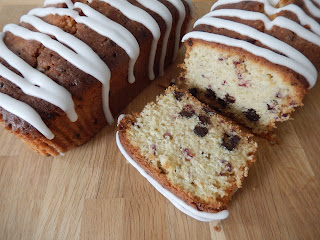 Although chocolate, raspberries, hazelnuts and lime sounded a very tasty combination of ingredients, this was a case where the sum total was less than its parts. I think the problem was that none of the ingredients stood out, so that, although these were pleasant cakes, overall the flavour was too non-descript. This could probably be easily remedied by more lime zest, more raspberries, a chocolate with more cocoa solids, or some chopped hazelnuts as well as the ground nuts, depending on which added ingredient you wanted to accentuate.

It was a double disappointment as these two cakes were to mark my and my son's birthdays in the middle of July, and I would have liked to make something a bit more memorable.

I made a double batch of what has become my 'go to' recipe for small loaf cakes, and divided it between two tins. This time, instead of chopping a bar of chocolate I bought dark chocolate chips as I thought the regularity would look better - perhaps it did, but I think the flavour would have been better with a bar of chocolate, as I usually use one with higher cocoa solids than in the bought chips. 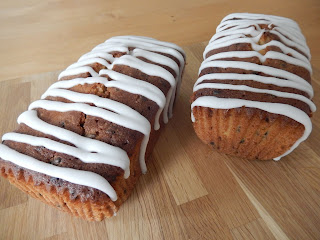 Method
Put all the cake ingredients except the raspberry pieces and chocolate chips into a large bowl and beat until smooth and fluffy, adding a little milk if necessary to give a dropping consistency. Fold in the raspberries and chocolate. Divide the mixture between two small (1lb) loaf tins, lined with parchment or a pre-formed liner, and bake at 180C (160C fan) for about 60 minutes, or until a test probe comes out clean and dry.

When cool, make the icing by sifting the sugar and adding the lime juice a teaspoon at a time to give a thick, just-pourable consistency. I find it easiest to drizzle this over a cake by putting the icing into a small freezer bag, and snipping off one corner. 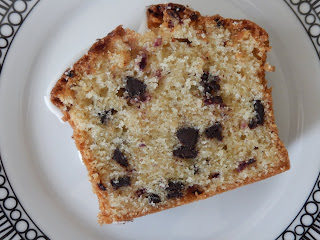 When the first slice was cut from the cake I thought the chocolate chips had sunk, but this was just the bad luck of random distribution - I took this photo of a slice further into the cake, just to prove they hadn't!

Another small loaf cake, inspired by this recipe on the Waitrose website. I intended to make the large cake but forgot to buy the extra eggs I needed, so had to aim for a half-sized loaf. I also increased the proportion of flour in the recipe to give a slightly sturdier cake - more like a Madeira than a sponge cake. 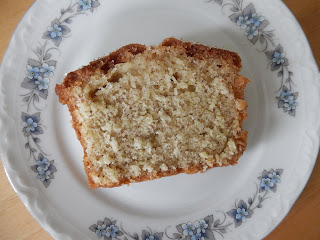 * I used a USA brand of superfine almond flour made from almonds ground with the skins still on, which explains why the cake is slightly darker in colour than you might expect.

Method
I made the cake by the all-in-one method, so all the cake ingredients, except the milk, were put into a large bowl and beaten until well mixed and fluffy. I needed to add about 1 tablespoon of milk to give a dropping consistency. The batter was transferred to a small (1lb) loaf tin lined with a pre-formed liner, levelled off, and baked at 180C for 55-60 minutes, or until a test probe came out clean and dry. 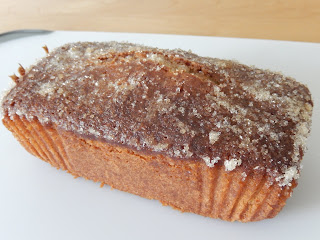 When the cake was almost ready I heated the lime juice and caster sugar together to dissolve the sugar. After taking the cake out of the oven, while it was still in the tin, I used a cake tester to pierce holes all over the cake. I drizzled over half the lime syrup, then sprinkled the demerara sugar over the top of the cake before adding the rest of the syrup - this ensured that the sugar stuck to the top of the cake and gave a crunchy topping.

The cake tasted as expected - a tangy mix of lime and coconut, with the almonds keeping the crumb of the cake moist and tender. The amount of lime juice from two limes gave just the right amount of drizzle for my tastes - I don't like drizzle cakes to be too wet!