Apologies to everyone who posted comments over the last few months, but didn't see them published promptly. Blogger stopped sending me emails informing me that there were comments awaiting moderation, and has only just recently asked me if I'd like to carry on receiving notifications. As  the number of comments has dropped off  over the last year or so anyway, it didn't occur to me to check if I'd missed any. Normal service should be resumed now! 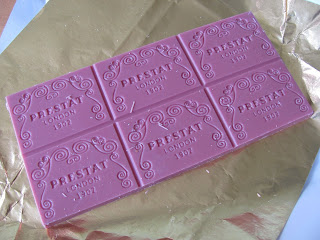 I tried ruby chocolate for the first time recently; its supposedly fruity flavour seemed very subtle (too subtle, in fact) to me. In its favour, it wasn't as sickly sweet as white chocolate, but it's too expensive to buy regularly, and I still prefer dark chocolate, with or without added flavours.
Posted by Suelle at 17:16 No comments:

- for the final We Should Cocoa 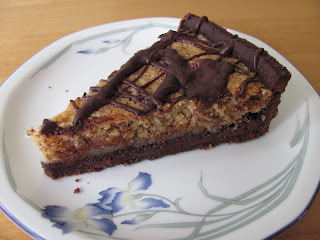 We Should Cocoa, a monthly link-up for chocolate recipes started 8 years ago, when Tin & Thyme was still Chocolate Log Blog, and Choclette shared her hosting duties with Chele at Chocolate Teapot. Amazingly, I have been participating since the first link-up, although not very regularly recently. According to my records, I've contributed to 65 out of a possible 95 events. This month will be the 96th We Should Cocoa - and Choclette has decided to call a halt.

For many years the link-up had a theme, so I decided to check on the first, in August 2010. It turned out to be raspberries. I made Chocolate Frangipane Tartlettes with chocolate pastry and raspberry jam in the base - a kind of chocolate bakewell tart. At the same time, I made some similar tartlettes, with Nutella in the base, which we preferred. I thought it would be a fitting end to these events to base my entry on the first thing I made, so decided to go with a tart with Nutella in the base and a hazelnut frangipane on top. I also added more chocolate to the filling, so that the final tart had both the chocolate and hazelnut flavours of the Nutella ramped up. 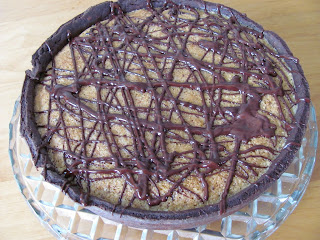 * 100% cacao is very hard, and when grated on a fine microplane grater, 25g goes a long way. If you are using  70% plain chocolate, or a coarse grater, you might need as much as 50g to get enough grated chocolate to cover the base. 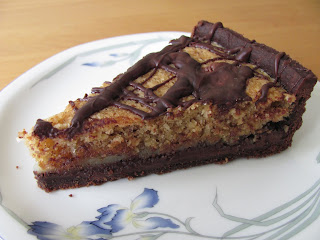 Make the pastry by sifting the icing sugar and cocoa into the flour, then rub in the butter until the mixture resembles breadcrumbs. Add the egg yolk and enough cold water to make a soft but not sticky dough, kneading briefly. Shape the dough into a disc, wrap in clingfilm and refrigerate for 15 minutes. Roll out the dough thinly and  line a 20cm (8") tart tin. Refrigerate again while you make the filling.
Pre-heat the oven to 200C. Put a baking sheet into the oven while it is heating.
Cream the butter and caster sugar until light and fluffy, then slowly beat in the egg, egg white and flour. Fold in the ground hazelnuts.
Warm the chocolate spread slightly (just a few seconds in the microwave, or in a bowl over hot water) and spread over the base of the pastry case, then sprinkle over the grated chocolate. Spoon the hazelnut frangipane filling into the pastry case and spread evenly.
Put the tart onto the preheated baking sheet and bake for 10 minutes, then lower the heat to 180C and bake for a further 25 minutes until the frangipane is set and golden in colour. Cool in the tin.
Finish the tart by melting the 40g of plain chocolate and drizzling it over the cool tart - I put the chocolate into a small plastic bag, then put that into a mug of hot water (seal the bag first, of course). When the chocolate has melted, snip off one corner of the bag to allow the chocolate to dribble out. This tart was delicious! The extra dark chocolate in the base cut through the sweetness of the chocolate hazelnut spread, and the hazelnut flavour of the frangipane came through strongly. The only thing wrong was that the frangipane appeared to have separated a little as it cooked, leaving a pale set custard-y layer at the bottom. Although this didn't affect the flavour, it did affect the appearance; I have no idea what went wrong.

So, it's the end of an era! I'm sending this recipe to the very last We Should Cocoa link-up. Although I don't bake as much now as I did 8 years ago, I can thank WSC for stretching both my skills and my imagination. Over the years I've used ingredients that I would never have thought to pair with chocolate (some more successfully than others, I must admit) and tackled more complex recipes than I would usually handle. I believe Chocolette intends to keep the WSC archive, and has a Pinterest board, so we can still look there for inspiration.

Thank you for 8 years of fun, Choclette! 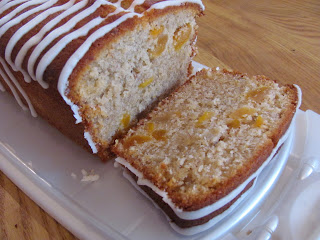 This banana cake with tropical flavours is another Dan Lepard recipe which I've used, and written about, before. As the years go by, the flavour of this cake varies according to whatever semi-dried exotic fruits I can get hold of - this year I used apricots, pineapple and mango - as fashion in dried fruit seems to change quite quickly. I bought dried mandarins, intending to add them too, but although I loved the taste, their texture didn't seem right for a cake. 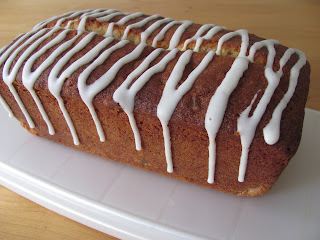 As well as exotic fruit, the other flavours added to this cake are coconut and orange, and some ground  almonds are used too, to keep the cake moist. The method for making the cake is a little tricky, and this is one time when it pays off to be well organised and have all the ingredients prepared and laid out in a logical arrangement before you start mixing.

As I've noted previously, the cake takes quite a bit longer to bake than suggested in the recipe - I added at least another 20 minutes before I was happy that the cake was fully cooked. The raw batter also almost fills a standard 2lb (900g) loaf tin, so if you've something slightly larger, it might be less worrisome to use that - I kept checking the oven, expecting to see the rising batter overflowing the tin. 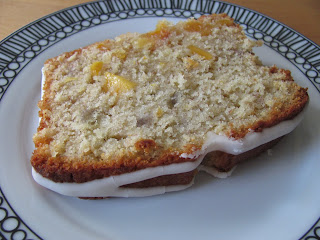 Because I was taking this cake to a meeting of my local Cake Club (a replacement for the active branch of the Clandestine Cake Club, which now only exists on Facebook) I decided to pretty it up with a very light drizzle of orange glacé icing, made with icing sugar and some of the juice from the orange which provided the zest for the cake.

Everyone loved this cake - the blend of flavours worked really well with the dominant flavour being the coconut (although it wasn't overwhelming), the fruit was soft and chewy and the texture of the crumb was tender and moist. 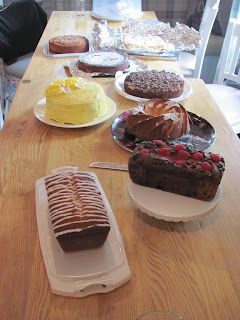 There was one other banana loaf cake at the cake club - this one had added raspberries and chocolate chunks - along with several cakes based on lemon, a chocolate and vanilla marble cake, a custard slice and an apple and pecan cake. Now that the rules of the Clandestine Cake club don't apply, and we're not limited to large cakes, we hope to get more variety at future meetings, as pastries, biscuits and small cakes can be made - anything edible really!