To be honest, this Lemon Meringue Ice Cream Cake is nothing more than an assembly job, consisting of just creme fraiche, bought meringues and lemon curd on a sponge cake base.  However, it's been a useful dessert to have in the freezer, especially during the sort of summer we're having at the moment. It slices easily from frozen, and only needs a few minutes to soften enough to eat. I found that the meringue pieces become less noticeable with time, but it still tastes good. 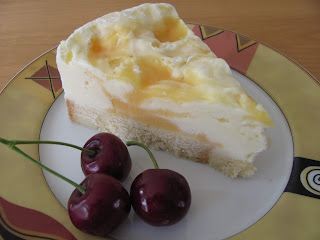 If you want to make it more complicated, you can make your own cake layer for the base - and I have done this in the past - but a good bought madeira (or even ginger) cake is perfectly acceptable. Another good addition, if you're only feeding adults, is a little limoncello sprinkled on the base, and stirred into the lemon curd. Homemade lemon curd would, of course, vastly improve the dessert too! 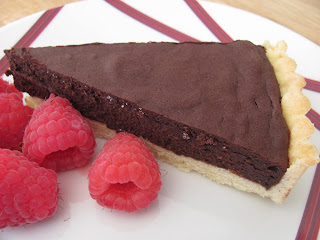 I've used this recipe before, when I needed a gluten- and lactose-free chocolate tart. I really liked it the first time I made it, and didn't want to play around finding a different recipe, as we were are in the middle of a heat-wave and having too much cake/dessert around isn't good for me at all, especially with no-one to help me eat it!

I find gluten- and dairy-free pastry shrinks more than usual when baked blind, but the recipe I use makes a sweet shortcrust pastry case which doesn't stick to the baking tin, doesn't seem to suffer from soggy bottoms and has a good 'short' texture which doesn't become too hard, which seems a good trade-off to me. The dough starts out stickier, and needs careful handling - you can find the details here. Instead of adding the tart filling to a raw pastry case, as in that particular recipe, the pastry case is baked blind once the clingfilm is removed.

When baking blind, the only thing I do differently, compared to regular shortcrust pastry, is to dry out the pastry case for a little longer than usual, at a lower temperature. I initially bake the case, lined with baking parchment and filled with baking beans, at 200C for about 12-15 minutes, then turn the oven down to 160C, remove the parchment and beans and return the empty pastry case to the oven for about 20 minutes. 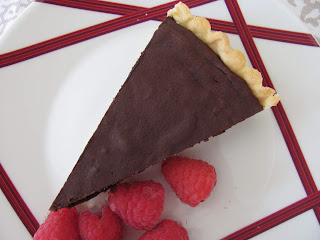 The filling for this tart is dense and fudgy, but as you don't add much extra sugar, it allows the flavour of the chocolate to dominate, so you need to choose a chocolate that you are happy  to eat on its own. The addition of the coffee is to further bring out the chocolate flavour, but I can't see any reason why other flavours couldn't be used too, such as orange zest. And, of course, if you don't need dairy/lactose-free, make it with butter and regular double cream.

As you can see, I served this tart with raspberries and there was also raspberry coulis and cream available.
Posted by Suelle at 22:27 2 comments:

made with caramelised condensed milk 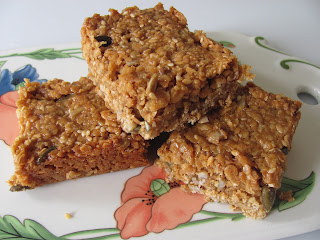 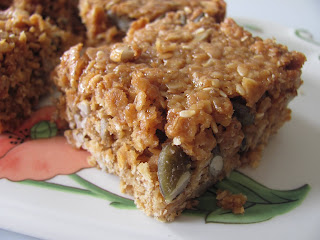 To salve my conscience slightly, I decided to add 100g of mixed seeds - a mix of pumpkin, sunflower, sesame and linseed. I used light muscovado sugar instead of golden caster, and also left out the vanilla extract - it seemed like a waste of an expensive ingredient in this sort of thing.

The recipe is a bit vague about exact amounts and the cooking time, but these are the weights of the ingredients that I used - 125g butter, 100g golden syrup, 90g light muscovado sugar,  200g caramelised condensed milk, 280g rolled oats, 100g mixed seeds. After melting the butter, syrup and sugar together, I stirred in the caramel until smoothly blended, then added the oats and seeds to the saucepan (off the heat) and mixed thoroughly. After transferring the mixture to a lined 20cm square baking tin and spreading evenly and firmly, I baked for my usual flapjack time of 25 minutes at 180C (160C fan), and allowed the tray to cool for 10 minutes before marking into 16 squares. 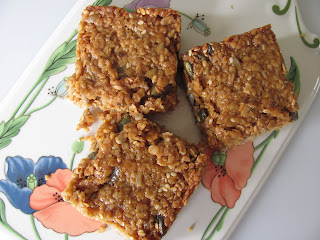 The flapjacks seemed very crumbly at this stage, which was a little worrying, but once they were completely cold they had set into exactly what I was hoping for - dense, chewy, fudgy flapjacks. Almost perfect - they were still a little crumbly around the edges, but within acceptable limits!

I think all flapjacks benefit from some add-ins to counteract the uniformity of the oat base. In this case the seeds added some crunch to contrast with the chewiness, and also some extra flavour.
Posted by Suelle at 14:20 1 comment: