This post should really be called Date and Coffee Loaves, as the recipe makes 2 x 1lb loaves. One loaf was sliced and frozen for future use, the other eaten over the course of a few days. 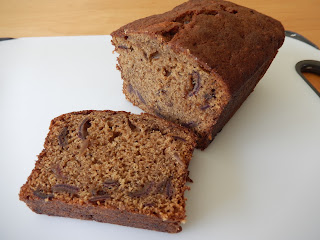 The recipe comes from Lynn Hill, the founder of the Clandestine Cake Club, who has recently renamed her website Traditional Home Baking. I've been a member of CCC and a follower of Lynn's work for several years, but this is the first time I've made one of her recipes.
The recipe was straightforward to follow, although the instructions regarding the dates are a little confusing. I didn't have Medjool dates so used Deglet Nour dates instead. These were already quite soft and didn't absorb all the coffee when the two were heated together. I added the dates and the residual liquid to the cake mix, but later found out from Lynn that all the liquid should have been absorbed, so I either should have simmered the dates for longer to evaporate excess liquid, or discarded the excess. 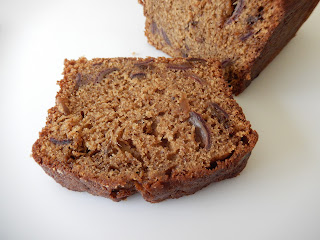 As it didn't spoil the cake (although too much liquid might have done so) it wasn't a problem in this case, but the written instructions might have mentioned that there shouldn't have been any residual liquid after cooking the dates, rather than just say the liquid should be reduced (by how much?).
This cake was delicious; both the dates and the coffee could be tasted and the flavour combination was very good. The loaf was quite light too; I had expected something like a tea loaf in texture but this was more like a sponge cake.
Posted by Suelle at 13:54 2 comments:

Regular readers will know that yeast and I don't get on together well, which makes it all the more surprising that I haven't come across this simple flatbread recipe before.

I guess it's popping up a lot online because strong bread flour and yeast are difficult to get hold of at the moment, although you're lucky if you can find any sort of flour in the supermarkets. Fortunately, I still have half a bag of SR flour, which is the type of flour needed for this recipe.

All you do is mix equal weights of SR flour and Greek-style yogurt (I always have full-fat yogurt in stock) and knead lightly; if the dough is too dry at this stage add more yogurt a teaspoon at a time, if it's too wet sprinkle over a little more flour and knead in. 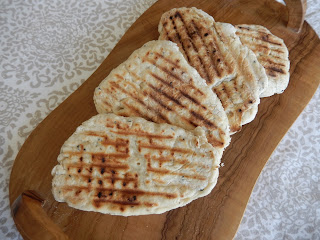 Then divide into portions (I got 4 individual breads from 200g of flour and 200g yogurt), roll out as thin as you like, brush very lightly with oil (optional), then cook on a hot griddle pan (or in a heavy non-stick frying pan) until golden brown.

I added some flavourings, as I was serving the bread with a curry, and wanted it to taste like a Nan bread. The first time I made the bread, I added salt, pepper and a teaspoon of nigella seeds to 200g of flour. The second time, I added more nigella seeds (a teaspoon to 100g flour) and a 1/4 teaspoon of each of ground cumin and ground coriander, as well as the salt and pepper.

My first attempt tasted fine, but I didn't roll the breads thinly enough. The second attempt, rolling the dough out to around 0.5cm thickness, worked much better, both in terms of flavour and texture. I think it would be difficult to tell that you weren't eating a yeasted bread. 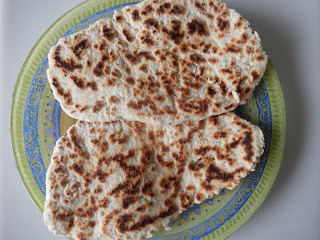 The great thing about this recipe is that it can be made in small quantities, which means I can make just enough for 1 meal, and not be tempted to eat too much. The dough can be mixed and cooked as quickly as you'd cook rice or potatoes, so doesn't mean extra time in the kitchen either.

The top photo shows the four flatbreads made  in the first batch, which were too thick. They were cooked on a cast-iron ridged griddle for about 3 minutes each side. The bottom photo shows the two I made on my second attempt, when the 100g portions of dough were rolled out to twice the size as the first time. These were cooked on a smooth griddle and took less than two minutes on each side.