- with cranberries and hazelnuts. 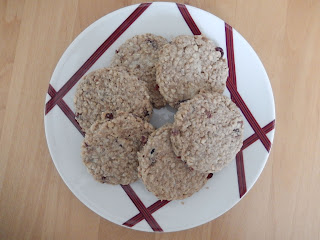 I always err on the side of caution when making pastry, having been caught out several times trying to stretch the amount quoted in a recipe further than it wants to go. Perhaps I just can't roll it as thin as a professional pastry chef, but I'd rather have a bit more than I need, than dough which has to be stretched to fit the tin, then shrinks unevenly when baked, or even worse, tears as you try to move it.

And since I found this recipe for using leftover pastry I don't have to worry about waste either (although I usually rolled out any scraps, baked them and then crumbled for wild bird food).

I had 200g of leftover shortcrust pastry, so added 200g of rolled oats, 100g butter, 100g of light muscovado sugar and half a teaspoon cinnamon. I left everything in a large bowl to allow the pastry to warm up a bit from the fridge, then kneaded everything together until no trace of any lumps of pastry could be seen. Then I mixed in 35g chopped toasted hazelnuts and 35g of dried cranberries which had been chopped into smaller pieces. 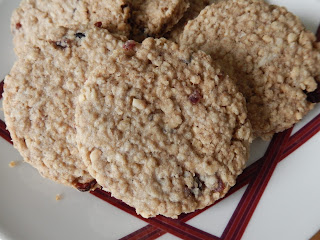 After  rolling out the dough, I used a 6cm cutter to cut out circles, then baked at 180C for about 15 minutes - a little longer than suggested in the recipe.

This recipe makes great biscuits which are not too sweet, but the sugar can be left out altogether to make savoury oat biscuits. I imagine that you could add dried herbs or seeds to flavour savoury biscuits but I haven't tried that yet. 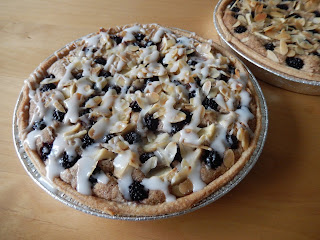 It's a measure of how little baking I do these days, that it's over three weeks since I last posted. When I do bake anything, however small, half of it usually ends up in the freezer, meaning there's always cake there if needed, but as a result I don't need to bake as often. My waistline doesn't need cake every day, either!

When making this tart I realised that I hadn't made any pastry since the festive baking at the end of 2018 - an indication that calorific desserts are also becoming something for special occasions; I usually just have fresh fruit and yogurt!

These Autumn Fruit Frangipane Tarts had plum jam in the base and fresh blackberries and pieces of eating apple embedded in the frangipane mixture. I made two small tarts instead of one big one, as I was taking one to my local Cake Club. The frangipane comes from this Jamie Oliver recipe, but I made half as much again, after seeing the amount the original ingredients gave. 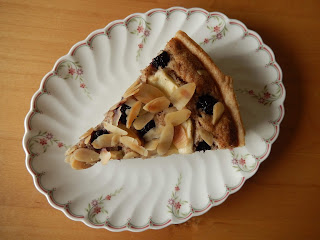 I made sweet shortcrust pastry to this recipe, but this made enough for the two tart cases with quite a lot leftover: 300g plain flour, 1/2 teaspoon baking powder, 150g butter, 50g icing sugar, 1 medium egg, water as necessary to bind. If you reduce the quantities you could use just an egg yolk instead of a whole egg.

Once the pastry is mixed, rest in the fridge for 20 minutes, then roll out as thinly as possible to line 2 x  20cm (8") tart tins (or one 23cm tin if you're following the recipe). Refrigerate again while you make the filling - there's no need to blind bake with a frangipane.

Put all the frangipane ingredients into a bowl and beat until well combined. I added just a few drops of almond extract, to give a better flavour, instead of the lemon zest in the recipe. Then prepare the fruit. 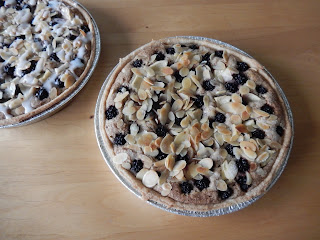 (I used one large eating apple, which I peeled and chopped into quite thin pieces, about 1cm square, and put into acidulated water so that the pieces didn't turn brown. I also used fresh blackberries, as I was worried that frozen would release too much juice and spoil the colour of the frangipane - I didn't weigh the amount I used but the quantity give in Jamie's recipe sounds about right.)

Spread a couple of tablespoons of plum jam (or whatever red jam you prefer) into the base of each pastry case. Divide the frangipane mixture between the two tarts, working from the edge inwards, and trying to get a good seal between the frangipane and the pastry, so that the jam doesn't boil out around the edge. Spread evenly and then dot the drained and dried apple pieces and blackberries over the surface, pressing down gently to embed them in the frangipane. Sprinkle over a handful of flaked almonds, then a little extra caster sugar.

Transfer to the heated baking sheet and bake for about 45 minutes until the frangipane is a good golden colour and feels firm. Cool on a wire rack. 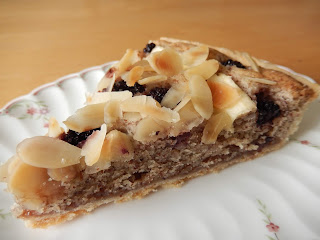 I decorated the tart which I was taking to Cake Club with a drizzle of glacé icing, but it's not really necessary, and the icing soon dissolved where it was in contact with the pieces of fruit, so didn't really give the desired effect by the time it was eaten.

Adding fruit to a frangipane tart is a tasty bonus, although in this case the plum jam had a stronger flavour than the apples and blackberries - I should have looked for a blackberry jam, I think.

My tart looks darker than most frangipane because I was using almonds which had been ground with the skins still on; the jury is still out on whether this really gives a good look.