Looking back over my brownie recipes, I was surprised to see that I've never made a basic gluten and dairy free brownie. I've made one using coconut flour and oil but wanted a recipe just using the standard sort of baking ingredients which most cooks would have available. The only 'speciality' ingredient is a commercial gluten-free flour mix - I use Dove's Farm.

I decided on one of my favourite recipes, which uses oil instead of butter and substituted the gluten-free flour mix  for the flour in the recipe. I would usually add a flavoured chocolate, or nuts to this recipe, but as I wanted to be sure it was allergen friendly, I stuck to adding more of the same 70% chocolate which I'd melted for the brownie batter - making sure it was dairy-free. 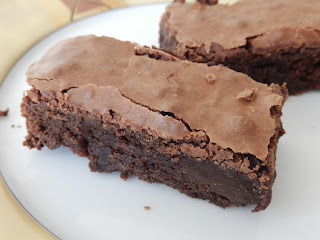 Method
Pre-heat the oven to 180C, fan 160C and line a 20cm (8") square brownie pan with non-stick baking paper.
Melt 150g of the chocolate in a medium sized bowl, over a pan of simmering water. Chop the remaining 100g, as finely as you like, and set aside - I like to keep about half the chocolate in quite big pieces.
When the chocolate has melted remove from the heat and whisk in the oil.
Beat the eggs, both sugars and vanilla extract together, in a large bowl, until lighter in colour and increased in volume - depending on the power of your whisk this could take from 3 to 5 minutes.
Fold in the chocolate and oil mixture.
Sift the flour into the bowl and fold in, then fold in the chopped chocolate.
Transfer the batter to the baking pan and bake for 25 minutes - a test probe should still have a few damp crumbs sticking to it.
Cool completely before cutting into pieces of your chosen size.

I think my opinion about these brownies was influenced by the fact that I don't need to eat gluten or dairy free. I could definitely taste the difference between gluten-free flour and regular wheat flour - it wasn't unpleasant, just not as good - but if you've no choice, it's something you obviously learn to live with. (My gluten and dairy-free friend had no complaints!) My biggest gripe was that although the brownies looked moist and fudgy when freshly cut, they dried out around the edges after a couple of days. This obviously isn't a problem if they're eaten fresh, but not so good if you're expecting a batch to last a few days for a smaller family, or just one person in the household. They were actually better eaten warm, as a dessert, with a scoop of vanilla ice cream - not something I treat myself to very often!
Posted by Suelle at 09:06 3 comments: 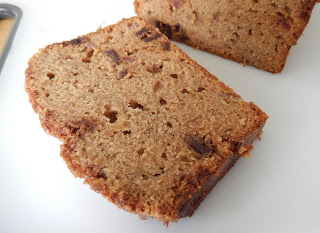 With a wet afternoon ahead of me, and some over-ripe bananas in the kitchen, I was looking for a recipe which I could make using just my storecupboard ingredients. This recipe for Easy Date and Banana Loaf, on the Waitrose website looked promising, and used my favourite storecupboard sweetener - date syrup - which was an added bonus.

Following the recipe exactly didn't quite work out, as I didn't have Medjool dates or enough butter and SR flour, but my substitutes worked well, producing a well-flavoured moist loaf with a firm but not heavy texture. I used cream cheese in place of the missing amount of butter, light spelt flour and some extra baking powder in place of some of the flour, and basic soft dried dates instead of Medjool dates. 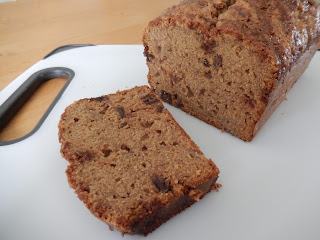 Method
Line a 900g (2lb) loaf tin with baking parchment or a pre-formed liner. Pre-heat oven to 160C.
Put all the ingredients except the bananas, dates and demerara sugar into a large bowl and beat until smooth, then beat in the bananas. Finally, fold in the dates.
Transfer the batter to the loaf tin, level the surface and sprinkle over the demerara sugar, if using.
Bake for about 75 minutes, or until a test probe comes out clean. 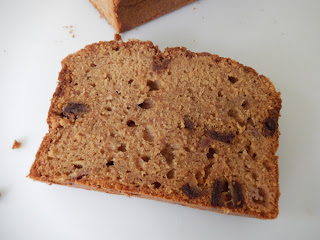 Cool in the tin for a few minutes, then transfer to a wire rack and drizzle with a little more date syrup.

The resulting loaf was moist enough to eat as a cake, although butter spread on this sort of loaf is always an option worth considering. The subtle spicing enhanced the overall flavour of the cake, but it was the dates which stood out as the strongest flavour. 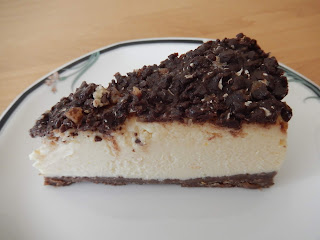 This is a really good cheesecake recipe, in so many respects, that it's a pity the topping lets it down a little. The base has just the right proportions of plain chocolate digestive biscuits and butter, so that it isn't too crumbly nor does it set too hard to cut. The cheesecake mixture is light and delicate in texture and flavour, and doesn't crack while cooling (although I did run a knife around the edge as soon as it came out of the oven to help prevent that).

The idea of the topping, which is a mixture of orange flavoured chocolate, and chocolate with almonds in it, is lovely, and it tasted delicious, but the chopped (or grated) chocolate melted on the hot cheesecake, then set to a crisp brittle layer, which made it difficult to cut and serve neatly. What is even more annoying, is that this didn't happen the first time I made the cheesecake - then the tiny pieces of chopped chocolate stayed as a 'rubble' across the top and didn't hamper cutting it at all. I suppose I must have used a different brand of chocolate this time. 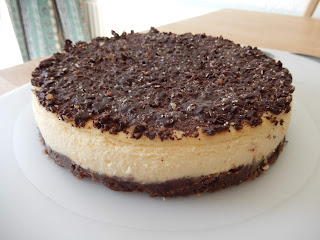 I didn't experience any problems with the recipe for this Chocolate and Orange Cheesecake, apart from the issue with the topping. I don't have a large food processor, so mixed with a hand-held electric beater, on a slow setting, after the eggs has been whisked thoroughly. As usual, even a double layer of foil failed to prevent a little water getting between the foil and the springform tin - perhaps it was condensation, as I was using extra-strong foil, which shouldn't have got holes in it with my careful handling.

I've been trying to think of a different way to top the cheesecake. Piped and set chocolate shapes or a thin layer of ganache, left to drip down the sides, are two options to keep the chocolate flavour. Another possibility is orange curd swirled into lightly whipped double cream or mascarpone. Overall, though, this is a recipe worth repeating.
Posted by Suelle at 09:32 2 comments: