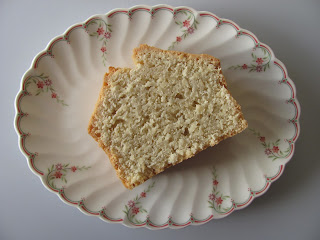 I was tidying my box of baking supplies when I noticed that I had three packs of desiccated coconut - must have been on special offer at some point. They were still within the 'best-before' date, but obviously something had to be done to reduce the coconut mountain before time did run out.

I decided make a plain coconut cake and to use coconut oil, to make it dairy-free. I could have added dried cherries, dried apricots or chocolate chips, all of which are good in combination with coconut, but sometimes something simple really fits the bill! 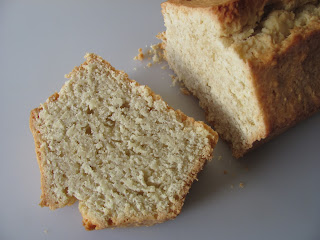 *(I used 80g, but thought the cake needed to be sweeter) 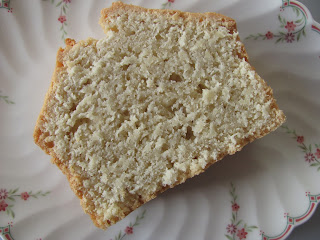 Method
Pre-heat the oven to 180C and line a 450ml (1lb) loaf tin, either with baking parchment, or a loaf tin liner.
Put the flour, coconut oil, desiccated coconut and sugar into a large bowl and use a fork to cut in the oil, until it is in very small pieces. (This recipe originally used butter and the rubbing-in method, but you can't really rub-in coconut oil by hand, although it should be OK if you're using a food processor).
Add the eggs and vanilla extract, and mix with a spoon until the batter is smooth, adding water as necessary to give a dropping consistency.
Transfer the batter to the baking tin, level the surface and bake in the centre of the oven for 60 minutes, or until a test probe comes out cleanly.

If I'm going to carry on baking regularly, I'm going to have to find recipes for smaller cakes, or experiment with halving some of the recipes I use regularly. Flapjack recipes are easy to divide, because there are no fractions of eggs involved, and the quantities of ingredients aren't critical to the nearest gram - a bit more or less of any of the main ingredients and you end up with a slightly crunchier, or chewier flapjack. Not a disaster, and a lesson for revised quantities next time. 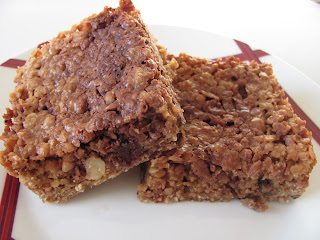 This recipe was inspired by this Annie Bell recipe, which I've used once before, and was chosen to use up an open jar of salted caramel - mainly to stop me just dipping in with a spoon and eating it on its own. I used half quantities of all the ingredients, but rather than drizzle melted chocolate over the baked flapjacks, I added 40g of chopped dark chocolate and 30g of coarsely chopped hazelnuts to the oat mixture.

As I expected, the chocolate melted in the heat of the flapjack mixture, but I was careful to add the chocolate as the last ingredient, and fold it in quickly. This meant that most of the chocolate stayed in discrete areas, giving the flapjacks a marbled appearance. The chopped nuts added an extra texture of crunch to the very chewy flapjacks, as well as flavour.

I baked the oat mixture in a tin measuring 20cm x 12.5cm (8" x 5") - I used a deep adjustable cake tin - but finding the right size baking trays for brownies and other traybakes is proving difficult. Everything I look at is either too big or too small for half-sized recipes, but I'm not sure fiddling around with more complicated calculations is worth the effort!

*If you only have basic caramel, add a little extra sea-salt 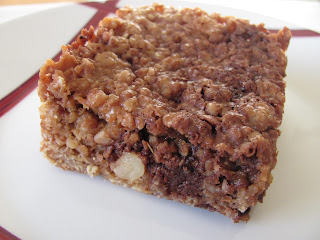 It's the usual flapjack method - melt together the butter, sugar and caramel. Stir in the oats, salt and nuts, then lastly, quickly fold in the chocolate. Spread into a baking tray lined with baking parchment and press down well. Bake for 25 minutes at 180C. Mark into portions while still hot, but cool completely before removing from the tin.

There was a lot of butter bubbling on the surface of the flapjack when it was removed from the oven, but it was all absorbed back in as the mixture cooled. It does make me think that the amount of butter in the recipe could be cut back a little, though.
Posted by Suelle at 08:34 2 comments: