For some reason, I have made this Panforte, for Christmas, at three year intervals - 2014, 2017 and again this year. Perhaps it's going to be a tradition! 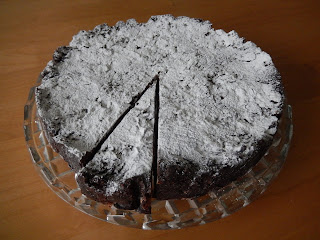 Panforte is a particularly suitable Christmas treat this year, when, if we are meeting friends and family at all, it's on a very restricted schedule with regards to both numbers and time. It keeps for weeks after making, so however few of you there are to eat it, you'll get through it without any waste. 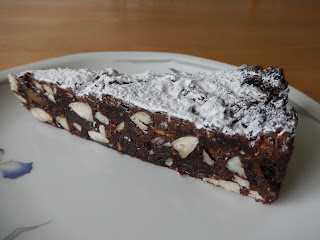 This year, this panforte will almost be all mine! Apart from a brief visit from both my children on Christmas Day for an exchange of presents and a meal together, the Covid restrictions mean, like many others, I'll be alone most of the time. That doesn't bother me - all I need is a good book to keep me happy, and it will only be a few days before we're all back into the routines of our lives. For me that can be quite hectic, as I volunteer at the local Food Bank, which has been very busy since the start of the pandemic. 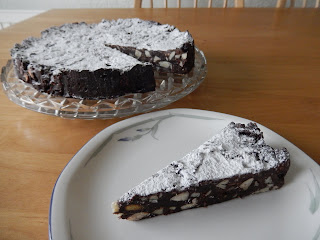 I followed my original recipe from 2014, which was a compilation of several other recipes, in a quest for perfection. I could vary the flavours by changing the fruit, or leaving out the ginger, but this particular combination of chocolate, figs and ginger, together with the spices and hint of orange, works so well that I'm reluctant to make changes.

Here's wishing you the best

for this Festive Season,

will be better for all of us! 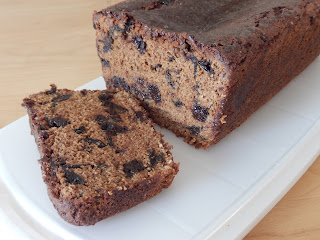 Ten years ago, I made Dan Lepard's Malt Loaf and although it was tasty, it didn't bear much resemblance to the squidgy, moist Soreen Malt Loaves found in most supermarkets.

Considering how long it is since I made that loaf, I can't help wondering why I haven't made one since, or why it's been on my mind so much, lately.

Anyway, putting those questions aside, I thought I'd try Felicity Cloake's 'Perfect' recipe this time, as she does a lot of the leg work by comparing, and trying, available recipes from reliable sources, and taking the best elements from each. The only unknown factor is whether her tastes coincide with mine, but in this case, they fortunately did. 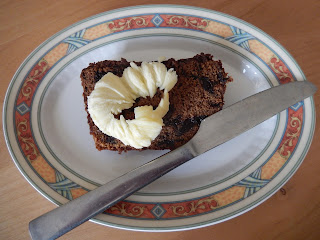 I followed the recipe exactly (the suggested size of loaf tin is a standard 2lb tin) and it really couldn't have been simpler - mix the sugar, syrups, liquid (tea) and fruit together, leave to soak a while, then stir in the dry ingredients, transfer to the prepared loaf tin and bake.

9 tablespoons of malt extract is 135mls, which was conveniently measured out by filling a 1/2 cup (125mls) to the point of overflowing. Lightly coating the measuring cup with oil ensured the malt extract flowed out easily too - no scraping out needed.

I also followed the suggestion to wrap the cake in baking paper and leave for at least 2 days before cutting it, difficult though that was. Knowing cake is in the house is such a temptation, but it was worth the wait! 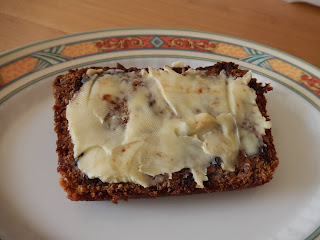 The loaf was everything I'd expected - strongly flavoured with malt, moist, sticky and stodgy. It wasn't quite as squidgy as a Soreen loaf, but that was actually a point in it's favour for me. Much as I like Soreen, I don't like how a slice can be squeezed into a gummy ball about half it's size.

So, was it 'perfect'? Very nearly!

My only slight criticism was that the flavours of the prunes and the malt blended so well together that the prunes were only detectable as a change in texture. I think next time I will try making the loaf with a proportion of sultanas too, so that the fruit adds more flavour contrast.