This isn't like the soft sticky commercial malt loaf which UK readers may be familiar with, but it's just as tasty. It's a dense loaf which needs a lot of chewing, so a small slice is quite satisfying (particularly when spread with butter). Despite the huge amount of sugary substances in the recipe - golden syrup, treacle, malt extract and dried fruit - it does not taste excessively sweet. 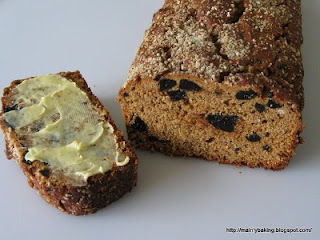 This Malt Loaf recipe is an old one from Dan Lepard, which has been revived recently by some of his board members. I used chopped prunes, lard, and a smoked malted bread flour in place of the wholemeal flour in the recipe. My mistake, I think, was to choose a badly proportioned loaf tin, relative to how much the loaf rose, but that did mean I could cut small slices!
Posted by Suelle at 08:51

I love malt loaf Suelle, this looks really good. Must pick up some malt and give this a whirl. Lucie x

Yummy I love malt loaf though never heard of smoked flour before!

Suelle, it's not something we have over here (or at least not that I know of), but it is reminiscent of a date loaf, much beloved by the generation before mine. It does look delicious though - will check out the recipe, thanks! And like Anne, I've never heard of smoked flour before either - did you smoke it yourself?

The smoked, malted flour is commercially available - I think it comes from one of our smaller artisan millers (Bacheldre Watermill - http://www.bacheldremill.co.uk/), although they produce enough to supply at least one of the UK's top-end supermarket chains - Waitrose.

I do like malt loaf! Last time I made it (I think I followed a Gary Rhodes recipe) I had quite a difficult time getting the malt extract - the chemists around here all tried to give me malt & cod liver. Which would not have been good.

Foodycat - I've heard the Gary Rhodes recipe is good, but is it as moist as the Soreen loaf that one can buy, do you know? This loaf was a little on the dry side.

I can imagine the effect that a large dose of cod liver oil would have! I bought my malt extract from Julian Graves, which I believe is owned by Holland and Barrett now. Health food shop needed, rather than chemist!

Don't know if it's just me Suelle, but sure I left a comment on this post and your previous one. Think I've lost comments on your blog before! Anyway am impressed with the malt loaf - yum!

Oh, didn't know about Julian Graves being owned by Holland and Barrett - the two shops are right opposite each other in Plymouth - hummm!

Suelle - I will have a better look next time I visit Waitrose, normally get their stoneground organic wholemeal flour which is great for bread :)

Choclette - I've certainly published all the posts I've recieved from you. If they are getting lost, it's before they reach me!

We have both H&B and Julian Graves here, too, but I've heard that in other places with both, one or the other eventually closes.