This is a repeat of the recipe for Fig, Chocolate and Ginger Panforte that I made three years ago. This year I used gluten free flour and divided the mixture between two 6" (15cm) foil pie cases for baking, as I wanted to take one as a gift to friends, where I knew that some of the other guests required gluten free food. I also left out the orange zest, although, after tasting, my memory of the first one tells me that that it's better left in! I kept the baking time the same, as the smaller panforte were similar in depth to one large one.

Panforte is ideal for this time of year, as it is more like a confection than a cake, and seems to keep for ever once it is baked. I cut the cake that I kept for myself today, over three weeks after making it and it tasted just as good as the when first made. It's very rich, so best cut into small slivers for serving. 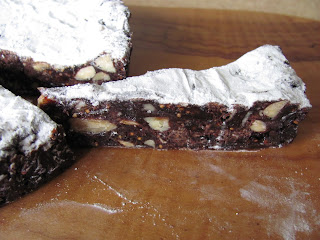 HAPPY CHRISTMAS
TO YOU ALL! 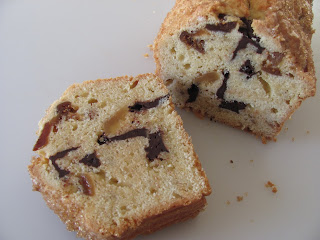 This is a simple, small loaf cake, made by the rubbing-in method, so you don't even have to think far enough ahead to allow time for your butter to soften. It can be in the oven within a few minutes of gathering the ingredients together. You can add any combination of dried fruit, nuts, chocolate, spices and other flavourings to the basic cake recipe; I chose some of my seasonal favourites - dried figs, crystallised ginger and dark chocolate.

This recipe makes a fairly robust cake, but as long as the batter isn't too loose, it will support quite chunky pieces of fruit and nuts. This means that it's possibly to taste all the individual additions. The combination of figs, ginger and chocolate worked really well together, although a touch of spice and orange zest would have made it even more festive. 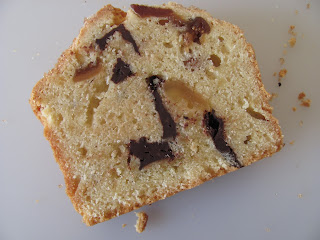 *  I used 50g each of dried figs, crystallised ginger and 70% chocolate, all chopped into similar sized pieces 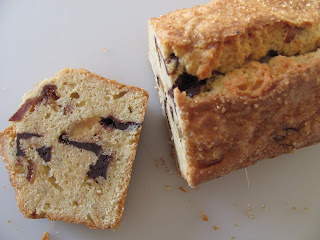 Method
Preheat the oven to 175C and line a small (1lb) loaf tin with baking parchment or use a loaf-tin liner.
Put the flour into a large bowl and rub in the butter, as if making pastry, until the mixture resembles fine breadcrumbs.
Mix in the sugar.
Add the egg, vanilla extract and enough milk to give a fairly soft batter - you'll need at least 5 tablespoons. Just stir the batter briskly - don't beat it!
Fold in your chosen 'add-ins'.
Transfer the batter to the baking tin, level the mixture and sprinkle with the demerara sugar, if using.
Bake for 60-70 minutes, until a test probe comes out cleanly.
Leave in the tin for 10 minutes, then transfer to a wire rack to cool. 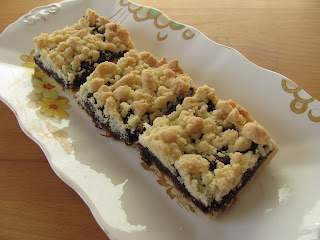 This is an adaptation of my favourite 'shortbread squares' recipe, which comes from 'On Baking' by Sue Lawrence, to make it gluten-free. Instead of wheat flour and semolina, I used a gluten-free flour, ground rice and added a little xanthan gum. It's the shortbread part of the recipe which is so good - quick to make, as it uses melted butter, and very crisp and light after it's baked. Any type of filling can be used, such as mincemeat or re-hydrated and cooked dried apricots - just make sure it's not too wet; for this version I made the filling from dates flavoured with pomegranate molasses, cinnamon and a little rosewater. 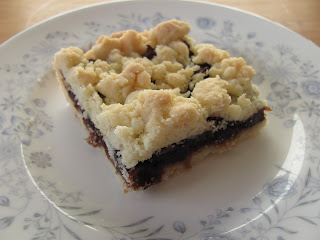 Start by making the filling. Put all the ingredients into a small saucepan and bring to the boil. Cover the pan, turn the heat to low, and simmer for a few minutes until the dates are soft. At this stage you can blend the filling until smooth, but I prefer to just mash the dates with a fork, to make a rough purée. You may also need to add a splash more water to make the purée easy to spread, if all the added liquid has been absorbed during cooking. 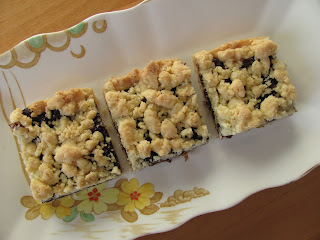 For the shortbread, mix the gluten-free flour, ground rice and xanthan gum in a bowl.
Warm the butter and sugar together in a small pan, until the sugar has dissolved, then pour onto the flour mixture. Stir well to combine thoroughly - the mixture will form a crumbly dough.
Put 2/3 of the dough into a 20cm (8") square shallow tin, lined with baking parchment, spread evenly and press down firmly.
Spoon over the date filling, spread evenly, leaving a small margin around the edges.
Use your hands to crumble the remaining shortbread mixture evenly over the dates to cover as much as possible, and press down lightly with the palm of your hand.
Bake for 30 minutes until pale golden in colour. Cut into squares (16) while still hot, but leave the squares to cool completely before trying to remove them from the tin, as they are fragile when warm. 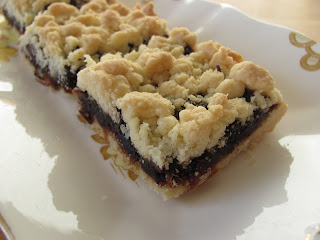 My only criticism of these is that the added flavourings were a little too subtle - both the cinnamon and the rosewater could have been increased.

* Dairy-free: I made a second batch of these date shortbread squares which were dairy-free as well as gluten-free, using Stork vegetable fat instead of butter. The shortbread was a little more crumbly than when using butter, for some reason, and they didn't taste as rich, but the recipe was largely successful.