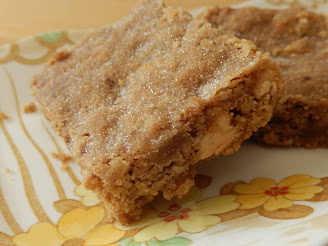 I think I've found a new favourite recipe for cookie bars or squares. It's another recipe from Lynn Hill at Traditional Home Baking. Lynn has published several recipes using this basic cookie dough, but the only one for which I had the 'add-in' ingredients already available was this one for Ginger and White Chocolate.

The recipe was simple to follow and easy to make. The only worrying moment was when it looked as if the beaten sugar and butter mix wouldn't take all the dry ingredients, but a little perseverance soon put that right!

I was slightly annoyed that I didn't have a baking tray anywhere near the right size for this recipe - I had to use my deep adjustable cake tin to make one which was nearly correct, but the deep sides made it a little more difficult to spread the dough easily. 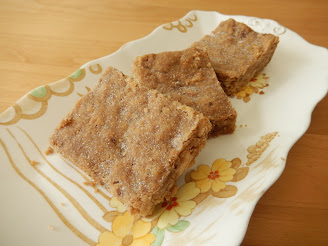 The texture of these cookie squares was very short, but made a little more substantial by the addition of the oats. It was this combination of 'melt in the mouth' but chewy which I liked so much!

As both white chocolate and glacé ginger are very sweet, I found these bars a little too sweet, but I'm looking forward to trying a version with dried fruits and/or nuts. Lynn has a recipe using apricots and almonds but there are many other variations that I can think of.

Yet another version of one of my favourite recipes!
We've been trying to carry on our local Cake Club online, and although it's nice to see what other people have been baking, it's not the same as meeting up and tasting each others' offerings! 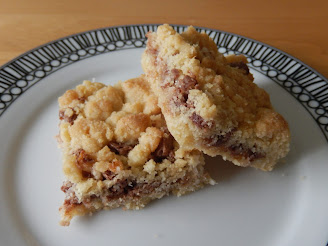 This time the theme (or perhaps that should be 'challenge') was to use a maximum of 5 ingredients. As no-one else would be sharing my bake, I wanted to make something that would either keep well, or that I could freeze in portions. As I have a designated 'cake drawer' in the freezer, and it was rather full at the time, I decided to make something that would keep well enough for me to eat over several days.
These layered shortbread squares were the obvious choice - I really like them, they are quick to make and the filling seems to be infinitely variable. I've made them with jam, purée made from reconstituted dried fruit, mincemeat, chocolate spread and caramel. The only thing I've yet to try is fresh fruit compote, which I fear may be too wet.
This time, I could only add 1 ingredient to the 4 which make up the shortbread - flour, semolina, sugar and butter.
I decided to take a leaf out of my '4-Ingredient Cookbook', which is occasionally somewhat elastic when it comes to defining an ingredient. Marzipan, for example, is one ingredient, even though you need at least three ingredients to make it, and a cup of mixed fresh herbs only counts as 1 ingredient too!
I decided to use chopped Bounty Bars as the filling layer,  to give the flavour of both coconut and chocolate! The idea worked really well, although if I make them again, I'd add 100g more chocolate, or get hold of some dark chocolate Bounty Bars, to maximise the chocolate flavour. 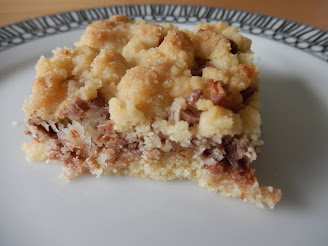 Ingredients
170g SR flour
170g semolina
170g butter
85g caster sugar
200g Bounty Bars - 8 treat sized bars - finely chopped
Method
Pre-heat the oven to 190C/170C fan, and lie a 20cm square shallow baking tin with parchment.
Place the flour and semolina in a large bowl. Warm the butter and sugar together in a small pan, just until the butter has melted and sugar dissolved. Pour this onto the flour mix and stir well until evenly combined.
Put 2/3 of the shortbread dough into the baking tin, spread evenly and press down firmly.
Sprinkle the chopped Bounty Bars evenly over the dough.
Crumble the rest of the shortbread mixture evenly over the surface and pat down lightly - it won't give complete coverage but will spread while baking.
Bake for 25 minutes, until surface is golden brown. Leave to rest for only 3-5 minutes, then cut into squares or bars. Do not remove from the tin until completely cold, or the bars will crumble.
Posted by Suelle at 16:47 1 comment: