I was beginning to think that starting a blog had jinxed my baking, but today's cake was almost perfection! I chose this Pear, Hazelnut and Chocolate Cake from the Good Food website as my starting point, but made a few changes. 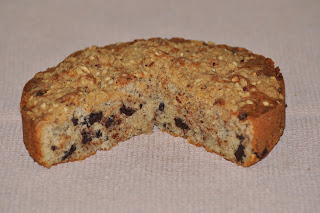 I bring back packs of ground hazelnuts from France, so I was spared that stage of the recipe. The basic cake mixture was made as in the recipe, but I added 100g of chopped plain chocolate and 25g chopped toasted hazelnuts as well as the two chopped pears. 50g of chocolate didn't seem enough to me, a confirmed chocoholic!

I didn't have enough pears to add the topping of pear slices, so decided to make a streusel topping instead, by rubbing 25g of butter into 25g SR flour and 25g demerara sugar, and adding 25g chopped toasted hazelnuts. This was sprinkled evenly over the top of the cake before baking.

The reviews of the cake on the Good Food site were very scathing about the accuracy of the cooking time suggested, but I found my cake cooked in 60 minutes - the upper end of the given time. 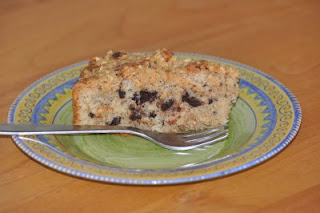 It was a gorgeous cake - moist but not to heavy, not too sweet and the right amount of chocolate. The pear was not overwhelming, but noticeable, and the extra chopped nuts added a good crunch. It would have been even better with a spoon of creme fraiche!
The only downside, which wasn't really noticeable until the next day, is that it's quite fragile and crumbly. Not really a problem when using the cake as a dessert, but it means it's not robust enough for a lunchbox or other occasions involving moving it about, such as picnics.

The thing about cakes filled with fresh cream is that they don't last very long - they just have to be eaten .....

Today I decided that I needed something which incorporated Nutella, having found a half-used jar that I bought for another baking project. After searching online for rec 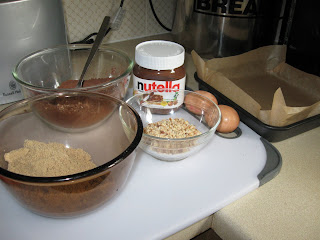 ipes, and rejecting many because I didn't have all the ingredients, and others because they just didn't look 'right', I decided to adapt this recipe for Nutella brownies. First adaptation was to translate the American weights and volumes into metric measurements, as I just can't get on with using cups. Then I upped the chocolate a little, and decided to add some chopped toasted hazelnuts too.

I followed my usual method for making brownies, melting the butter and chocolate together in a bowl over a pan of simmering water. This melted mixture was cooled slightly then the sugar was added and the mix stirred until smooth. Next, the eggs were added, one at a time, and mixed in well. After this I stirred in the Nutella, then sifted in the flour and cocoa and folded them into the mixture. Lastly the chopped nuts were folded in.

At this stage the mixture seemed very thick, and it was quite difficult to spread it into the prepared tin (8 x 8" tin, lined with baking parchment). This had me quite worried as other brownie batters I make are much runnier at this stage. The brownies were 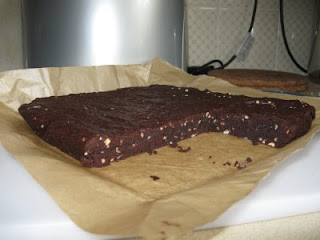 baked as suggested in the original recipe - at 180C for 20 minutes.
Once cooled and removed from the tin, I could see that they were too shallow. I prefer a deeper brownie which will stay moist in the centre. The flavour is good - the chocolate is very intense - and the texture is dense and chewy - which is good for a brownie. Perhaps the only adjutment I need to make is baking in a smaller tin next time, or increasing the quantities of ingredients a little - 25%, say, although adjusting the eggs by that much will be inconvenient.
This recipe is a 'keeper', although it needs more work!
Posted by Suelle at 14:48 4 comments:

Well, I regard that as a wasted afternoon - the cake (see yesterday's post) was a huge disappointment!

The cooked cake layers stuck to my non-stick cake pans and broke up round the edges on removal. Despite being crumbly, the cake also had a strangely sticky texture. While handling the layers for assembly, the edges broke up even more, and the meringue topping started to separate. I also felt the recipe used too much cream in the filling.

Although the cake was pleasant to eat, with a nice contrast between the cake, meringue and cream filling, I felt that the chocolate flavour wasn't intense enough. I usually make chocolate cakes with a far greater chocolate content - often both cocoa and melted chocolate.

Not a recipe to put into the 'keep' file, I'm afraid. I was going to start experimenting with photographing my baking efforts too, but I didn't think this was worth it!

PS - the cake was eaten over three days, refrigerated but brought to room temperature before serving. The layer of meringue which ended up in the middle of the cake, topped with cream, quickly melted into the cream to make a marshmallowy layer. The meringue topping gradually collapsed and separated from the cake, but stayed crisp on the surface over the three days.
Although this cake wasn't a success, I quite like the idea of a meringue topping baked into the cake. Perhaps adding meringue to just one cake layer would be better, although I'd need to find a better cake recipe. A filling of whipped cream and a drizzle of dulce de leche would be nicer than adding chopped Rolos, too, I think.
Posted by Suelle at 21:37 No comments:

This weekend's baking project is a birthday cake for my son.

Chocolate of course. Even though he's an adult now, he still prefers chocolate cake above any other flavour.

I'm going to try an old recipe from Good Food magazine - Triple Choc Crunch Gateau. It's no longer on the Good Food site, but is published on the Nigella Lawson's site. The big mystery is why it's called a 'triple' chocolate gateau!
Posted by Suelle at 21:38 No comments: