This isn't a new recipe to me, but I wanted something quick to put together and bake, to take to the local Cake Club meeting. Whatever I made also needed to fit in with the theme of 'Summer', and as the recent heavy rain has given my rhubarb patch a late surge in growth, using some of that seemed the most obvious way to go. 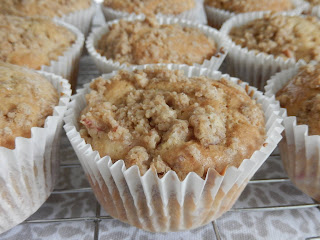 I followed this recipe from Smitten Kitchen almost to the letter - the only changes I made were to use all white flour, rather than some wholemeal, and just demerara sugar in the crumble topping, for an extra bit of crunch. 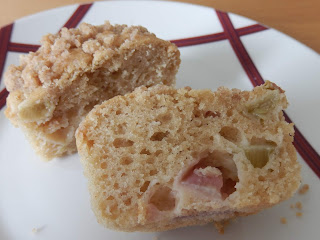 The muffins were light, not too sweet and very subtly spiced. I used 200g of diced rhubarb but I think the recipe could have taken a little more, although you do have to be wary of the amount of fruit juice produced when the rhubarb cooks, which could make the muffins too damp and heavy.