"If it ain't broke, don't fix it" is a refrain often heard, and this time I decided to take heed. Through some unexpected changes in plans (mostly involving social distancing) I once again found myself with too many bananas. Up until recently this has happened about once every 5 years, but this year, twice so far! 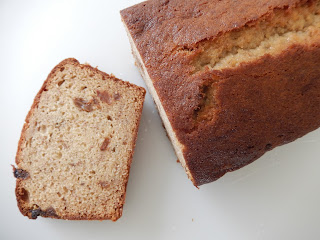 So I used Mary Berry's tasty, quick recipe again; this time I added the scrapings from a jar of mincemeat (roughly 70g) and 50g sultanas. Using the mincemeat meant that I didn't need to use the 2 tablespoons of milk in the recipe - there was enough moisture in the mincemeat - but otherwise I followed the recipe and made the whole batter, including the extra additions, as an all-in-one mix.

Once again, this was delicious. The mincemeat added a little spiciness to the show, but the banana still came  across as the dominant flavour.

This time I didn't freeze any of the loaf, and I was really surprised at how well it kept - the last slice was almost a week old, and as good as the first.
Posted by Suelle at 15:26 1 comment: