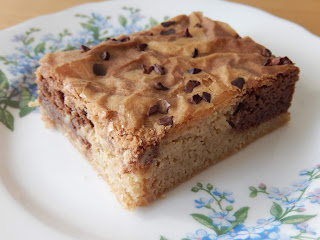 Have you ever been cleaning up after baking, and found an important ingredient underneath a tea-towel, or behind a packet of flour? Well, that's what happened here. These blondies were supposed to be flavoured with coffee, but I took the little dish of instant coffee over to the draining board to add the boiling water, so as not to spill any water on my work area - and that's where the little dish stayed!

The only reason I'm writing up the recipe is that even unflavoured these blondies were pretty good - they were dense and chewy, something not often found with blondies - so with the added coffee (turning them into Mocha Swirl Blondies) they should be excellent. 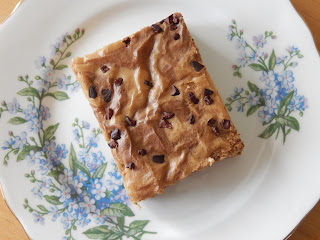 The recipe, by GBBO contestant Martha Collison, was in a recent 'Weekend' newspaper given away by Waitrose supermarket. I'm always wary of baking with white chocolate, but  this recipe involved adding it to a mixture of melted butter and sugar, which seemed much safer than trying to melt it on its own. The mixture did separate out as it cooled, but adding the eggs and beating well seemed to remedy that problem. A note for next time - the blondies were well baked after 25 minutes, so need looking at a few minutes sooner.

The small amount of cocoa added to a portion of the batter, to make the swirl, was more for visual effect than flavour, I think, but maybe it would be  different with the coffee added. I'm determined to try these again soon, and do it properly next time.
Posted by Suelle at 15:39 1 comment: 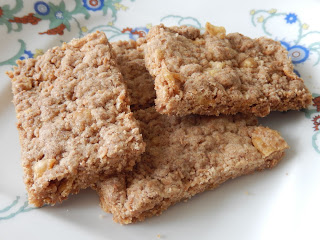 My sister recently spent the week with me, visiting from Spain. We managed to get all four siblings together for the first time in six years, so a lot of 'do you remember?' conversations were inevitable. My memories of our early childhood are very vague, apart from a few stand-out events, but even so it was surprising how much our memories differed!

Although I've always considered that my mother was a basic but uninspired cook (mainly down to family finances and a head of the household who would only eat 'meat and two veg.') her baking drew no complaints. When us girls were allowed to help in the kitchen (never the two boys!) her recipes came mostly from the little booklet of Be-Ro Home Recipes, which I'm sure every housewife owned before cookery books became more affordable (in the 70s?). 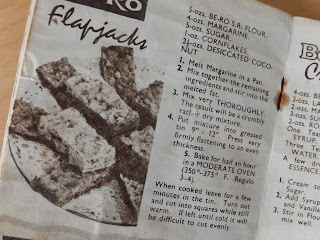 I have Mum's booklet now and it's easy to see from the stained pages which were popular recipes, even if my memory had failed to tell me. However, both my sister and I remembered the flapjack recipe - unusual because it contains cornflakes, and is nothing like modern flapjack recipes based on oats. After my sister had gone, leaving half a packet of cornflakes, I decided to try the recipe. Apart from using butter instead of margarine, I followed the recipe as written - even using ounces on my scales. My baking tin was a fraction smaller than the one stipulated in the recipe but nothing to worry about. 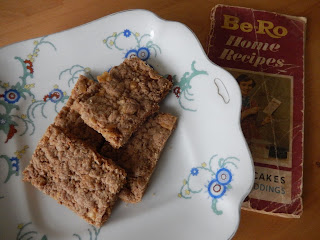 Surprisingly, the smell of them baking was what I remembered most. The flavour was right, but I don't remember them being as crisp. I think they were slightly over-baked, as I forgot the advice that I've often given to others - modern ovens cook faster than old ones, so take a few minutes off the baking times.

The flapjacks were very thin too - almost like biscuits. The flavour comes mainly from the desiccated coconut with the cornflakes adding some extra crunch. I'm wondering whether to try the recipe again in a much smaller tin to see if it produces something chewier and more like today's oaty flapjacks.

I think these lived up to my memories, but there are much better modern recipes around!
Posted by Suelle at 10:18 3 comments: 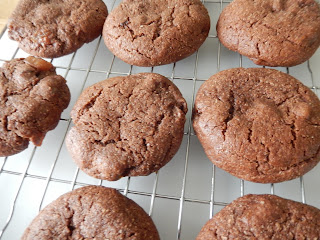 I didn't intend to bake last weekend, but I had an online discussion with friends about whether a weird sounding recipe that we'd all noticed would actually work. The recipe in question was this one, from former GBBO contestant Tamal Ray, in the Guardian Feast magazine. Not only did the recipe sound strange - so much liquid! - the accompanying picture didn't look particularly attractive either - should a baked cookie still look shiny? As I had all the ingredients to hand, including date syrup, one of my favourite sweeteners, I decided to set my doubts aside and give it a go.

The result was a delicious soft cookie, strongly date flavoured, with nuggets of sweet dried fruit. I can't say the recipe was entirely successful, as the cookie dough was too soft to shape initially, and had to be chilled for 90 minutes before I could roll it into balls. And my cookies didn't look much like the picture in the magazine, either, but for my personal taste, that was an improvement. 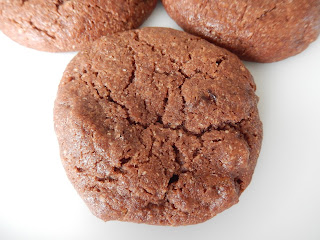 Because the dough had been chilled I allowed an extra 3 minutes baking, but otherwise followed the recipe exactly (apart from needing to chill the dough, of course). I didn't have medjool dates, but did have some large soft dates to use instead, and I used the zest of two tangerines instead of an orange - but neither of these changes substantially altered the recipe.

The cookies were quite large - if I make them again I think I would make them a little smaller - and very soft, and both the orange and almond flavours were overwhelmed by the date syrup, but I'm still glad I decided to risk the experiment, and that the recipe worked (with just a little adjustment!).