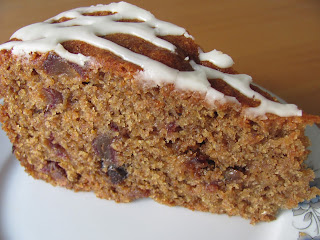 This is a recipe from one of Waitrose's monthly recipe cards  (also online here). I didn't pick it because it was dairy-free, but because I liked the sound of the other ingredients when put together - dates, orange, almonds and cardamom. I just happened to have some dairy-free spread to use up too, which was an added bonus. It's a strange recipe - it uses only bicarbonate of soda as a raising agent and is cooked at a very low temperature; the dates, sugar and orange are all acidic, so I presumed these ingredients would interact enough with the bicarbonate to raise the cake. 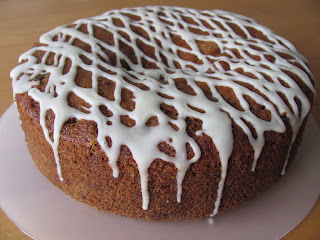 I had to use a slightly smaller baking tin, 20cm in diameter rather than 21cm, but the cake still cooked in the time given in the recipe. There was a slight dip in the centre, which spoiled the appearance of the cake a little - no idea why that happened, unless it was using the smaller tin! This time I added the drizzle of orange frosting suggested, just to alleviate the brownness of the cake, but it wasn't really necessary for flavour. 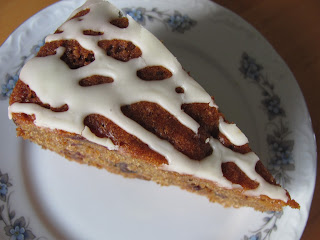 The cake was, surprisingly, as it contained wholemeal spelt flour, very light and moist. Both the orange and cardamom flavours were quite subtle, but I don't think that's always a bad thing - sometimes you just want all the ingredients to blend into something unique which is delicious but unidentifiable. You don't always want to be hit over the head with several, or even just one, big flavour, and that's what happened here. Because of this, and because the cake wasn't too sweet, I think this was a cake where the flavour of the spelt flour was noticeable too.

This is definitely a recipe to put in the 'repeat' file.
Posted by Suelle at 16:20 2 comments:

The theme for a recent meeting of my local Clandestine Cake Club (CCC) was 'How to Hygge', which seems appropriate for mid-winter, as Hygge cooking concentrates on warming spicy flavours and 'comfort' food. Even though Hygge is a Danish word, the Swedes and Norwegians have the same concept of warmth and cosiness, particularly during the long dark winters. This meant I didn't feel constrained to search for only Danish recipes, fortunately. The problem with Scandinavian baking, from a CCC point of view, is that Scandinavians seem to be hotter on the types of baking that can't be taken to CCC - yeasted buns, small pastries, biscuits and tarts etc. 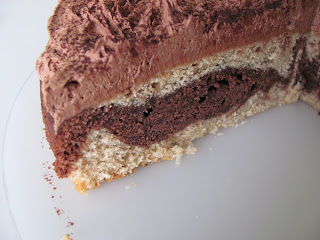 I have The Nordic Bakery Cookbook, and tried out the basic cake recipe in there, making a ginger cake, and although it was delicious, I felt that it was too dry and plain for a CCC meeting. Finding no relevant recipe books in the local library, I resorted to what I could find online - which was mostly recipes from The Nordic Bakery or Scandilicious. Signe Johansen's recipe for Spiced Chocolate Cake, from Scandilicious, soon caught my eye, but I was disappointed that the recipe made a very stodgy cake when I tried it (see photo, above) The batter was difficult to marble too, as it was so shallow - I hoped the layers would swirl more as they cooked.

At that point I was running out of time to try other recipes, so decided to embrace the concept of this Spiced Chocolate Cake (also known as Tropisk Aroma), by keeping the flavourings used in Johansen's recipe, which I'd really liked, but using an ordinary sponge cake recipe as a base. I also decided to make the three layers as a sandwich cake, as in this recipe, rather than layer the batters into one pan, and swirl them before baking, as in the original recipe, pictured here. While I was making changes, I also decided to use a rich chocolate fudge frosting and filling, rather than buttercream, which I find is sometimes too sickly. 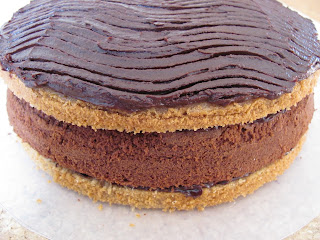 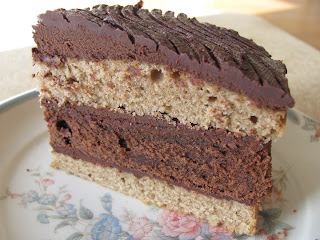 Method
Prepare 2 x 20cm (8") sandwich tins, at least 4cm (about 1 1/2") deep, and preheat oven to 180C, fan 160C.
Put the butter, sugar, eggs, flour, baking powder, coffee-flavoured milk, cinnamon and nutmeg into a large bowl and beat with an electric mixer until well blended and aerated. Add a little extra milk if necessary, to give a dropping consistency.
Weigh 500g of this batter into one of the sandwich tins and spread evenly.
Beat the melted chocolate and cocoa into the remaining portion of batter, again adding milk if necessary.
Spread this chocolate batter into the second sandwich tin.
Bake both cakes for 25-30 minutes, until risen and firm.
Cool in the tins for a few minutes, then turn out onto wire racks to finish cooling.
Make the frosting by melting the chocolate and butter together, either in a bowl over a pan of simmering water, or in a thick bottomed pan directly over a very low heat, stirring occasionally. Remove from the heat and  beat in the milk and golden syrup. Cool until the fudgy frosting holds it's shape.
Split the coffee sponge layer in two horizontally, and place the bottom layer on a serving plate.
Using roughly 1/4 of the frosting each time, sandwich the chocolate layer between the two thinner coffee layers. 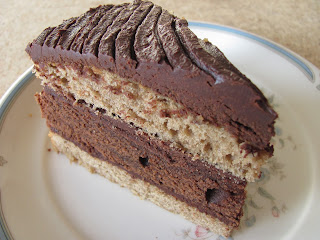 Spread the rest of the frosting on top of the assembled cake and decorate as you wish - a dusting of cocoa seems to be traditional, but I just marked a pattern using a fork.

* most versions of this cake that I've seen online completely cover the cake in a thick layer of chocolate buttercream. To do that with this frosting recipe I think you would need twice the amount I've given here!

I really liked the combination of flavours here! Chocolate and coffee always work well together but the combination of nutmeg and cinnamon added a very subtle warm spiciness. If I made this again I think I'd increase the spices to 2 teaspoons of each - the flavour was perhaps a little too subtle! 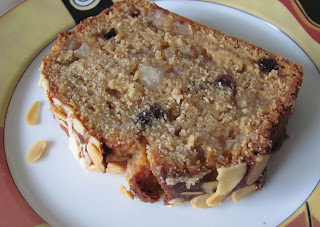 This is a great cake recipe for using Christmas leftovers, but also good enough to buy mincemeat and marzipan especially to make it (as long as you could find a use for the leftovers!). I was using brandy marzipan, brought from the 'reduced to clear' shelf, and a standard nut-free mincemeat.

The recipe comes from Good Food, although it isn't on their website. I originally found it in one of their cookbooks - 101 Cakes and Bakes - and there are plenty of blogs which have given the recipe. I wrote out the recipe when I first used it, six years ago (here's the link!) so there's not much point is writing it again. This time I needed to add a couple of tablespoons of milk to loosen the cake batter - it was a very stiff mincemeat - and it needed a few minutes longer baking time as a result. I also increased the marzipan from 85g to 110g, as I suggested in the linked post, although I kept the pieces small as I read on one blog that large pieces of marzipan had sunk to the bottom of the cake during baking. This time I sprinkled a handful of flaked almonds on top before baking. 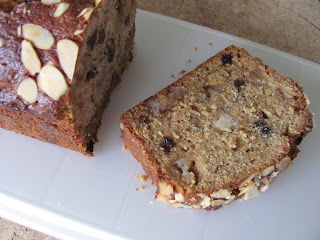 The mincemeat I used was quite basic, so the almond flavour of the marzipan was the strongest element of the cake. I think adding a little more spice, or even the grated zest of an orange, would have been an improvement, but it's difficult to know in advance how the mincemeat will influence the flavour of the cake. My husband thought it tasted like Stollen, so he really liked it! 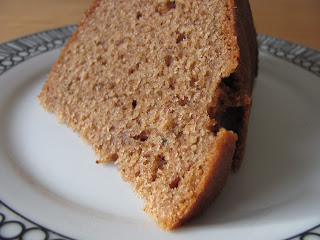 This highly spiced cake, from The Nordic Bakery Cookbook (recipe here except that you only need 1 1/2 teaspoons ginger, not 16!), might be called a 'ginger' cake, but the spices that dominated were cardamom and cloves - spices that aren't to everyone's taste. I really liked the mix of spices - cinnamon, ginger, cloves and cardamom - but would probably swap the amounts of ginger and cardamom if I made it again - just to make it more 'gingery'. 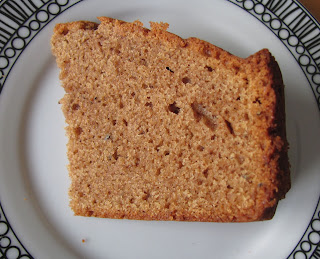 I found that following the recipe exactly made a very stiff batter, but went ahead and baked it anyway, despite my misgivings. I used a 20cm (8") springform tin, after putting the batter into the suggested tin size and worrying that it would overflow; the baking time was still the same. Even the larger tin made a very high cake, so I wouldn't try it in the smaller tin in the future; what I would do is add a few tablespoons of milk to the batter to loosen it and try and make the cake a little moister. The cake had a lovely close texture and wasn't too sweet, but it was a little on the dry side. This made it a good cake for everyday use - perfect with a cup of tea or coffee, but not the sort of thing you'd produce for special occasions. This is not a bad thing - you certainly don't want fancy baking all the time!
Posted by Suelle at 08:29 1 comment: