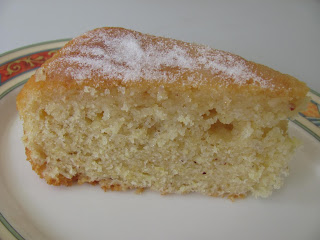 Although I didn't pay much attention to the recent Royal Wedding, I must have been subconsciously influenced by the talk of a lemon and elderflower wedding cake, as I suddenly felt that that was the cake I really I wanted to eat.

Having decided which recipe to use, I realised that I didn't have any ground almonds, so used hazelnuts instead. I love using ground hazelnuts in cakes, as they actually add flavour, as well as keeping the cake moist - so often the flavour of almonds is lost, unless you are using a lot, or add almond extract too.

I chose to adapt this BBC Good Food recipe for a Lighter Lemon Drizzle Cake, as it is a reduced fat recipe, and uses oil instead of butter. I've always found it reliable, producing a light, moist cake with a good crumb texture. As I've mentioned, I used ground hazelnuts instead of almonds, and also used sunflower oil instead of rapeseed, as that's what I always have available. Instead of a lemon drizzle, I reduced 150mls of elderflower cordial by half, and drizzled that over the cooked cake, while still hot, then sprinkled the cake lightly with caster sugar. 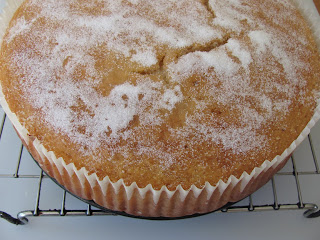 This was a subtly flavoured cake - none of the three flavours dominated, although I would have liked to taste more of the elderflower; I think I was just unlucky that the brand of elderflower cordial that I bought was very delicate. Despite that, it was a very good cake for a warm spring weekend.
Posted by Suelle at 15:26 2 comments:

I'm so glad I decided to bake this Molasses and Coconut Rum Cake, even though it was too big for me, and I had to freeze half of it in slices. It's the best cake I've tasted for a long time! 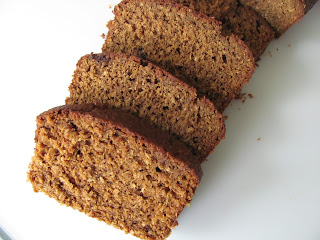 The recipe, from the ever reliable and inventive Dan Lepard, popped up on my Facebook feed recently, as I follow the Australian Good Food site. A lot of the recipes there aren't immediately relevant, as the seasons are reversed, but a lot of cake recipes, like this one, aren't seasonal anyway.

As is often the case with Dan, the recipe has a slightly unusual method - it wasn't difficult, but there were one or two points worth remembering for next time. The recipe says to heat the sugar and molasses (I used black treacle) together until any lumps of sugar have softened, but not to boil the mixture. The butter is then melted in the warm sugar. I don't think I heated the sugar enough, as when it was tipped into my mixing bowl a layer set on the bottom, which was really difficult to mix back in, and the butter, which I had cut into small cubes, only just melted. Better to have a little more heat, I think, then wait for the sugar and butter mixture to cool a little, if necessary, before going on to the next stage of adding the eggs, so that the excess heat doesn't cook the eggs. 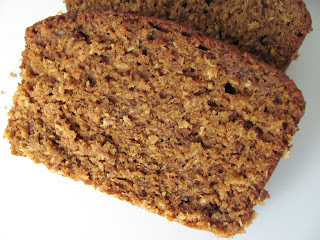 I added about 3 tablespoons of rum to the cake - all there was left in the bottle - and it soaked in easily. I'd probably add a bit more next time, as the flavour wasn't as strong as I'd expected.

Because I was going to freeze part of the cake, I didn't make the frosting. I don't often add frostings to everyday cakes, but I think I'd add one if I made this for a special occasion - and the cake is certainly good enough for that! 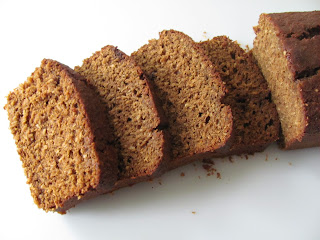 There was a relatively large amount of desiccated coconut in this recipe, compared to traditional British coconut cake recipes, but it was almost overwhelmed by the stronger flavours of the black treacle and the spices. The texture of the cake was soft but not too sponge-like; in some ways it was more like a gingerbread than a coconut cake, although it didn't get a sticky top when stored.

This is definitely a recipe to repeat!
Posted by Suelle at 08:40 4 comments: 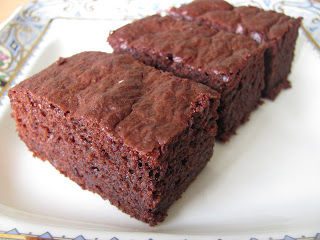 This recipe from Jill Dupleix, for Tahini and Date Brownies, made a fantastic chocolate cake, but I couldn't really relate it to the sort of thing I expect from a brownie recipe - it was far too light! Using puréed dates gave a lovely soft, but rich, texture, as well as cutting down on the amount of refined sugar and fat usually used in a recipe of this size, but did stop the brownies being dense and fudgy.

The amount of tahini in the recipe didn't make much of an impact on the flavour either. It's hard to tell unless I made the same recipe without the tahini, but we certainly didn't bite into a brownie and say 'Oooh! Good sesame flavour there!' 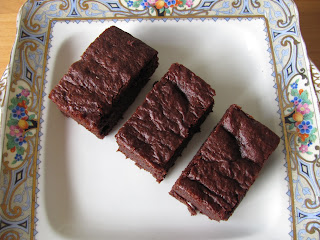 I puréed the dates with a stick blender, which was pretty hard going, as the purée was so thick. A blender attached to a food processor would probably given a smoother purée, but that wasn't possible for me. To those who profess to not like the flavour of dates, I would say, if you get a really smooth purée, you wouldn't even know the dates were there! However, I liked the odd little nubble of date left in my purée, just to remind me what was in the brownie.

If you are worried about the amount of refined sugar your family is eating, you would probably enjoy this recipe. I think it would make a good rich chocolate layer cake too - I'm pretty sure it would fit into 2 x 18cm (7") sandwich tins.
Posted by Suelle at 09:03 2 comments: