- for the September AlphaBakes challenge - the letter Q 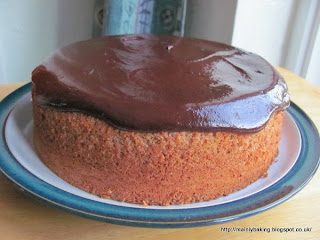 This month's randomly picked AlphaBake's letter - Q - is something of a challenge to most of us, I expect, although I don't think it's the worst letter of the alphabet to deal with.

A quince dessert would have been good, but it's a little too early in the year to find quince for sale. I could have made a quiche, or baked with Quark, but I began my hunt through the indices of my cookery books (my usual starting point) with Dan Lepard's 'Short and Sweet', and found this quinoa and hazelnut cake straight away. 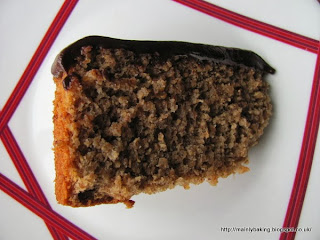 There were several preparatory steps, such as toasting and then cooking the quinoa, which made producing this cake a long winded affair, but the cake itself was quite easy to make. It seems a miracle to me that the sloppy amalgamation of the whipped egg whites and cooked grain, which looked so strange when it went into the oven, produced something which looked like a regular cake. I was half expecting the grain to sink and cook in a separate layer.

I added a chocolate fudge frosting to the cake, because I didn't want to use fresh cream and fruit, as suggested in the recipe. Chocolate and hazelnuts are one of the family's favourite cake flavour combinations, so that change worked really well. 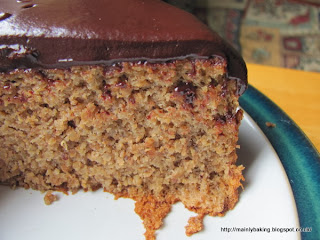 However, although the cake was light and fluffy and looked pretty normal, and tasted really good too, none of us liked the texture of the quinoa in the cake. It tasted like cake but felt like couscous - a most peculiar sensation! At this point, where we've each had a serving of the cake, I'm not even sure that I will be able to persuade the others to eat any more, even in the cause of not wasting food! 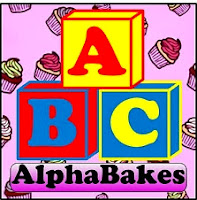 AlphaBakes (rules here) is a challenge based on a randomly chosen letter of the alphabet. The dish made must feature something beginning with that letter as one of the main ingredients or part of the name. It is hosted jointly by Ros at The More Than Occasional Baker and Caroline at Caroline Makes. Caroline is the host this month, with the letter Q, and as usual will post a round-up of entries at the end of the month.
Posted by Suelle at 19:39 6 comments: 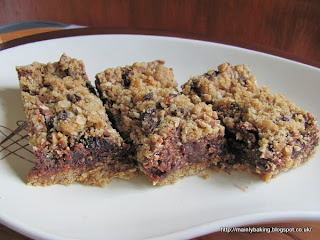 I've been back from a wonderful holiday in western Canada for a while, but haven't had time for any baking until now. We were plunged straight into helping FB with the move into her first home - trips to IKEA and DIY shops, assembling furniture etc. There's still lots to do before she has to leave here at the end of the month, but I did want to take part in some of my regular baking challenges, so made time for a baking session. 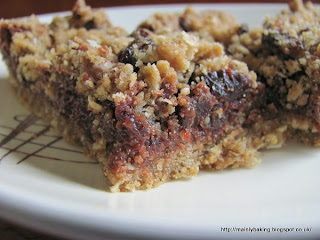 These oatmeal brownie bars were a great success the first time I tried them, but didn't turn out quite as well this time. Despite extra time in the oven the brownie layer didn't set fully; this didn't affect the flavour, but made them very difficult to eat! This time I added 100g of chopped dried cherries to the topping portion of the oatmeal mix - this added a delicious sour and fruity note to the bars.

I am entering these into the Tea Time Treats challenge for September. This month the challenge for 'flapjacks, oats and tray bakes' has been set by Karen, at Lavender and Lovage, who alternates hosting duties with Kate at What Kate Baked.
Posted by Suelle at 07:54 5 comments: