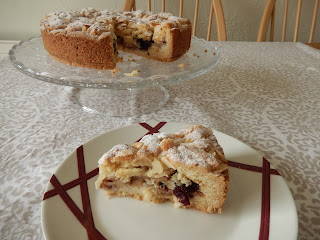 I usually make this cake, which is two layers of a scone-like dough sandwiching a layer of fresh and/or dried fruit, as a dessert. I often make it when I haven't got time to fuss around with pastry, as the result is very similar to a pie, but much easier to make.
This time, I wanted to capture some of the essential flavours of Autumn, which is one of my favourite times of the year for seasonal baking. So I used eating apples, dried cranberries and cinnamon in the filling, and some flaked almonds in the topping. 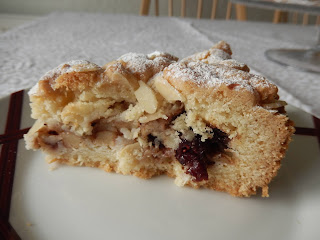 Ingredients
150g butter
150g caster sugar
1 large egg
300g SR flour
3 eating apples, peeled, cored and sliced*
80g dried cranberries
1 teaspoon cinnamon
30g flaked almonds
icing sugar to dust
* I usually slice the apples into water to which I've added a little lemon juice or vinegar, to stop the fruit discolouring. When I'm ready to use the slices, I drain them well and pat dry on a clean tea towel.
Method
Preheat the oven to 180C, and line the base of a 20cm (8") springform tin with baking parchment; grease the sides with a little butter if your tin needs it.
Melt the butter in a large mixing bowl, in the microwave, or in a saucepan on the hob - if you do this in a large pan you can mix the dough in it too. The butter doesn't need to be really hot - just completely melted.
Stir in the sugar, then beat in the egg.
Add the flour and mix in thoroughly - it should give a soft crumbly dough. 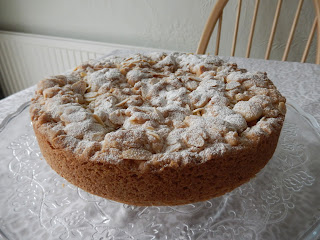 Put 2/3 of the dough into the cake tin, and spread evenly with your fingers, building up a little wall of dough around the edge of the tin, to contain any excess fruit juices.**
Mix the flaked almonds into the remaining dough.
Mix the prepared apples, dried cranberries and cinnamon together and spread over the dough base.
Crumble the rest of the dough over the top, then press down lightly, spreading the dough a little to give good coverage over the top. The dough will spread more during baking, so don't try to fill all the gaps.
Bake for 50-60 minutes until the top is firm and golden. Cool for about 10 minutes, then run a knife between the cake and the edge of the tin, to stop and leakages of fruit juice sticking to the sides.
Dust with icing sugar before serving; I like this at room temperature, and I usually leave it on the springform base as it's quite fragile, but  it can be moved to a serving plate if you have a large cake lifter.
** There's a photograph here which shows how the cake is assembled.
Posted by Suelle at 09:31 No comments: 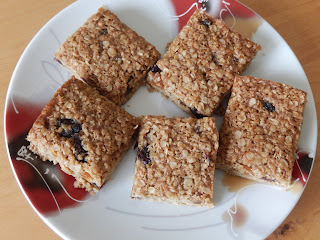 Up until now, I thought my recipe for flapjacks was perfect. Over the years the ratios of sugar, syrup and butter were tweaked and the quantities adjusted until the flapjacks were thick and chewy.

One thing I have never done is add flour to my flapjacks, so I was intrigued to see that Lynn Hill of Traditional Home Baking is an advocate of doing so, maintaining that it helps to give the flapjacks the desired chewy texture. Although I like the texture of the flapjacks produced by my recipe, I'm not too proud to see if this suggestion is an improvement.

I followed Lynn's recipe for Fruity Flapjack, but rather than the fruits suggested in the recipe, I used 100g of chopped dried apricots, 50g of cranberries and 30g of chopped glacé ginger, which had been rinsed and dried to remove the syrup coating. I also added 2 teaspoons of ground ginger to make sure there was enough ginger to taste. The mix of apricots and cranberries is one of my favourite combinations in baking. 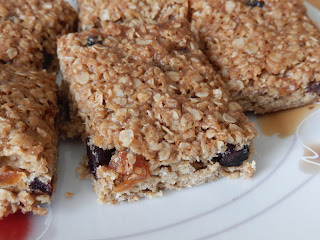 Our recipes are very similar in the quantities of ingredients used (apart from the flour), although Lynn's bakes in a slightly larger tin, so I was interested to see how much difference adding the flour would make.
It was huge!

The texture was completely different - much softer as well as chewy. I think adding the flour also helped absorb the butter mixture more completely too - my flourless flapjacks are usually a bit stickier.

Both recipes have their merits so I'll probably use both in future, depending on the result I want. Mine are chewy and sticky, Lynn's are softer and chewy. However, when I do use flour, I think that I will go back to baking in a slightly smaller tin, as I prefer a thicker flapjack.