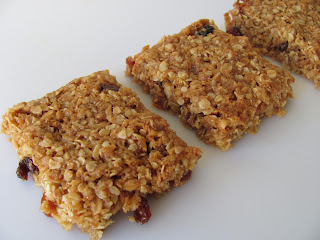 Various family issues have meant that baking time has gone out of the window at the moment. I haven't really baked much since sometime in Spring, when Hubby said he wanted to cut down on cakes and puddings to lose a bit of weight. Nearly all my posts since April have been clearing a backlog of things which hadn't been written about. However, I did want to make something for the Bank Holiday weekend, as a little indulgence seemed acceptable.

I've said before that flapjacks are a really good way of using up ends of packets in the baking storecupboard, and this sometimes leads to exciting flavour combinations that work really well. This time I also had a pack of granola breakfast cereal that needed using up - it was just a basic granola containing raisins and almonds, so I added some golden raisins and desiccated coconut to up the flavour a bit. Granola already contains quite a lot of sugar, and often some fat too, so my basic flapjack recipe had to be adjusted a little to compensate for this. 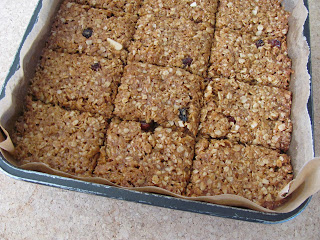 Method
Line a 20cm (8") square shallow baking tin with parchment, folding it so that the sides of the tin are lined too. Preheat the oven to 180C.
Melt the butter, syrup and sugar together. I usually do this in a large mixing bowl in the microwave, but a saucepan on the hob is fine too. The mixture doesn't have to boil, just get hot enough for the sugar to dissolve. 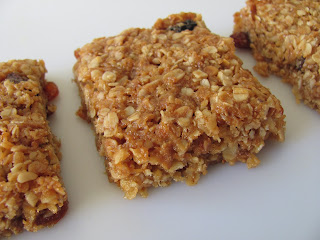 Stir in the other ingredients and mix thoroughly.
Transfer to the baking tin, spread evenly and press down firmly.
Bake for 25 minutes, until just turning golden brown. This timing gives a chewy flapjack - if you like it crunchy, then bake for a little longer.
Cool for a few minutes, then cut into fingers or squares, but don't remove from the tin until completely cold. 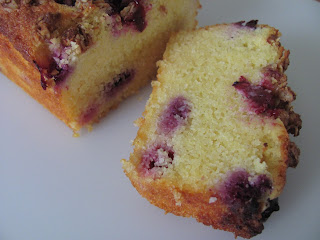 We planted two blueberry bushes earlier this year, but we weren't sure whether or not they would bear fruit straight away. Fortunately they did, although the fruit doesn't all ripen at once, so I'm picking 100-150g every five days or so. I've also found out that I really prefer cooked blueberries to raw, so I've made blueberry sauce for some cheesecake pots, and added some to baked rhubarb. 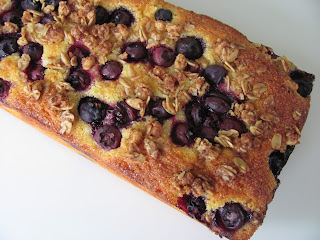 I decided to put the latest pickings into a cake, but had to find a recipe using a small amount. I also had some lemons that needed using, so a blueberry and lemon cake seemed in order. I soon found this Sainsbury's recipe for a lemon and blueberry polenta cake, which only used 100g of fruit. I had to adapt the recipe a little, using vanilla yogurt instead of natural. As I was using a yogurt with a separate topping of toasted oat flakes (about a tablespoonful), I sprinkled them on top of the cake too. 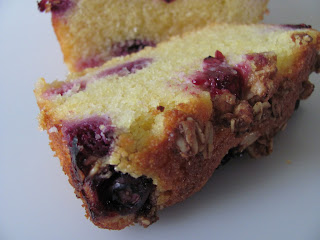 This was a deliciously light cake, although I think it could have taken another 50g of fruit, as the blueberries were very thinly spread. The zest of another lemon would have improved the flavour from my point of view but I do like a tart lemon cake - others might appreciate the subtlety of a milder flavour.

It's also nice to add another gluten-free cake to my repertoire.
Posted by Suelle at 07:49 4 comments: