This is the first time for many, many years that I've made lemon curd, but it was well worth the 20 minutes at the stove, stirring a gently heating bowl.
Searching for a recipe, I was amazed at all the variations of what should be a simple recipe. I was using the remains of a bag of 7 lemons bought 'reduced to clear', when I just had only needed the zest of 2, so didn't want to use any recipes using just egg yolks - there's no point making leftovers when you're using up leftovers! I finally decided that the crucial part of the recipe was enough eggs to set the lemon juice, and the butter and sugar was more arbitrary, so I started with the simplest recipe I found - one egg, one ounce (28g) of butter, and 4 ounces (110g) of sugar to every lemon. I had found recipes using double that amount of butter, but that seems excessive to me.
My lemons were quite small, but my eggs were large, so I used 5 lemons, only two of which still had their zest. I only had 350g sugar left in the bag, so decided this would be enough, as I like my lemon products quite tart. Then I just chopped a block of butter in half, giving me roughly 125g.
So, 125g butter was cut into small pieces and put into a large bowl with the finely grated zest of 2 lemons and the juice of 5, 350g caster sugar and 4 eggs. The bowl was placed over a pan of simmering water and whisked constantly until the contents had thickened enough to coat the back of a spoon.
This took about 20 minutes, but would have possibly been quicker if I had used a larger pan, so that the bowl sat deeper into it and was nearer the simmering water. I didn't get any of the possible problems - curdling or threads of egg white setting quicker than the yolks. I put this down to the very slow heating and the fact that I was using a balloon whisk and not a spoon. 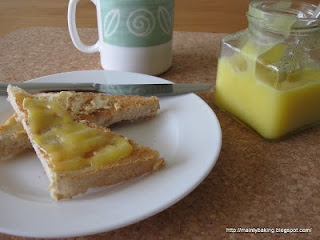 The curd was then poured into sterilised jars and sealed with screw-top lids while still hot. Stored in the fridge these should keep for a couple of weeks.


I liked the texture and taste of the curd - smooth, just holding it's shape, not too rich and buttery, but felt it wouldn't have hurt it to be a little tarter - next time I will use more zest.
As you can see, I tried a little for breakfast this morning, but I don't usually eat much bread, so don't want to succumb to this temptation too often. If any of you can recommend baking recipes to use up the lemon curd, that would be fantastic. I would like to be able to incorporate it into something baked, such as a cake or cookie bar, rather than use it as a filling for a layer cake or pie, as the Chief Tester isn't very fond of sharply lemon flavours, even though I am.
Posted by Suelle at 08:47

Would you like me to email you the bramley apple lemon curd recipe to compare to these? That's the only sort I have made this year... Suelle - your photo reminds me I haven't had any breakfast yet...Looks scrumptious! I tried to find recipes to use lemon curd when I made it too, but it seems to be mostly fillings.....frustrating when you have the jars sitting there in the fridge and knowing that they have a relatively short shelf life.

Thanks, Zeb - I found that recipe (from the Guardian?) while I was searching. I know Dan Lepard has a cookie recipe with a lemon curd and oat topping baked on, but, being basically lazy, I'd rather make cakes than fiddly cookies! ;-)

Suelle, I make lemon curd in the microwave, it only takes a few minutes. I wrote about it here if it's of any use.

I make a buttermilk and ground almond cake, and often put lemon curd or jam in the centre before baking - so half the batter, dollops of lemon curd, then topped with the remaining batter, then into the oven. Oh, and the DL cookie recipe is very nice too, but they burn easily and are pretty ugly to look at. :)

You make this sound so easy and fast. I tired making it once years ago and it went horribly thready. I guess the whisking is the trick. I did come across a recipe recently using lemon curd - annoyingly I can't remember where I saw it, but I'll get back to you if I get any sudden inspiration.

Got it - the Chocolate Teapot has a recent post of a lemon curd and blueberry teacake which uses lemon curd as part of the cake ingredients. http://thechocolatepot.blogspot.com/2010/02/lemon-curd-and-blueberry-loaf-cake.html

THIS LOOKS SO GOOD! I WILL HAVE TO GIVE IT A TRY.

Celia - I thought about using the microwave, but worried about too much power at the critical moment resulting in scrambled eggs. I may try it in the future.

Choclette - thanks for that link, it's the sort of thing I was looking for. I'm wondering about something similar, with lemon and pistachios, at the moment. I need to give the Chief Tester something with chocolate next, so still have a few days to make a decision.

Hi Foodycat - Nigel's a little behind the times with that idea. I made something very similar (with creme fraiche) several years ago - think it was a 'Good Food' magazine recipe.