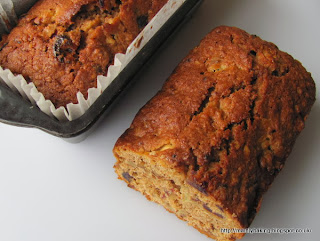 After the success of Nigel Slater's cake recipe recently, which was loosely based on traditional proportions of fat, sugar and flour, I decided that maybe I've been too experimental recently and that a return to more traditional cakes would ensure better results.

This was also partly prompted by re-finding an old Delia Smith book - Book of Cakes - which I'd dropped into the bottom of a crate while clearing out my mother's house. I've just got round to emptying out the crate here, four months later! Looking through the book, which I think was published in 1988, I found several recipes which I've bookmarked to try, but all required some additional ingredients before I could bake. 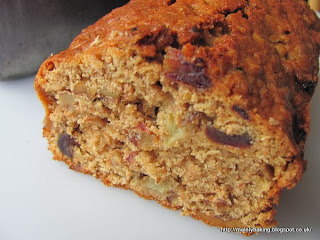 However, I did have all the ingredients for the Date, Apple and Walnut Loaf featured in Delia's Complete Cookery Course (p600 of the 1982 edition). This Apricot, Apple and Pecan Loaf recipe from her website is similar, except that a small apple, 110g walnuts and 75g dates are used instead of the larger quantities of apricots, pecans and apple - the old recipe is much more frugal with it's additions. There is also no cinnamon in the Date Loaf, and no sugar topping - I said it was frugal! The old recipe also uses soft margarine, but I substituted very soft butter - there are limits! 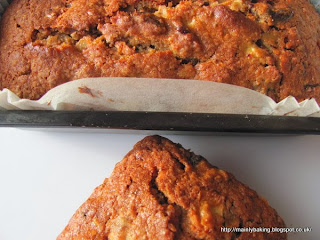 The plainer Date Loaf cooks in an hour, but as I divided the batter between two small loaf tins, they were cooked in 50 minutes. I used some very lush sticky dates, which, with the apple, made the cake moist and chewy and also gave it a spicy toffee flavour. This seasonal cake was a real treat of old fashioned flavours which are often overlooked these days.
Posted by Suelle at 10:54

what a beautiful and unctuous cake full of knobbly bits of fabulousness!

There's something very special about oldfashioned baked treats! This one looks perfect - it makes me crave a cup of tea and a slice! :)

Follow the link to the Apricot, Apple and Pecan Loaf and use 110g walnuts, 75g dates and a small apple instead of the quantities of pecans, apples and apricots in that recipe. Everything else is the same.

Yes, everything else is the same except it says not to use the cinnamon and there is no sugary topping to go on either!