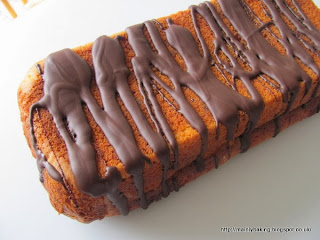 I don't know if Jibber Jabber, the host of this month's We Should Cocoa challenge had a premonition of what was to come on Week 8 of The Great British Bake Off, but after a week of magnificent 3-D vegetable cakes which were also non-dairy, I'm sure that anything containing vegetables that I can bake will be an anti-climax. Fortunately I don't have to make a non-dairy cake or turn it into a novelty cake, and even more fortunately, I must include chocolate in some form to take part in We Should Cocoa. I've gone for substance over style (unlike Ruth) but this cake really was a little too substantial. I could be like Christine, and claim that the 'bread-pudding like' texture was intentional, but I really don't think that's how it should have been. 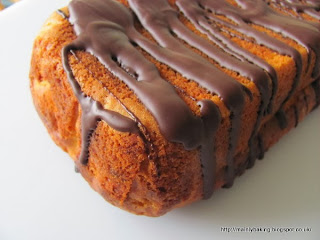 I scoured the internet for recipes which went beyond the usual carrots, courgettes or beetroot and in the end decided to use sweet potato. I also decided to use white chocolate, as most dark chocolate vegetable cakes I've tried lose the vegetables under the intensity of the chocolate flavour. I really wanted to get the full effect from the sweet potato. I used this recipe from The Good Food Channel, adding the zest of an orange, as suggested in the 'Tips' part of the recipe.

I know I've said in the past that I was never again going to make a recipe which melted white chocolate, but here the chocolate was melted with the oil, so what could go wrong? It didn't go drastically wrong, but the white chocolate still didn't melt easily and I really had to work hard to amalgamate it with the oil. The only other change I made was to finely grate the sweet potato, as I don't have a food processor which would reduce raw vegetables to a purée 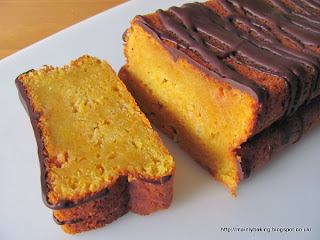 The cake rose well in the oven and I tested it with a heat sensitive probe at the end of cooking time, and it appeared cooked. However, once out of the oven it collapsed quite a bit, to the extent that the sides of the cake collapsed inwards too. I'm not sure if it was undercooked or if there was too much liquid or raising agent, or whether it was just the addition of the chocolate, but the collapse made the cooled cake quite dense and pudding-y. Luckily, the flavour was excellent, although very sweet for our taste, so after the first taste I added a drizzle of 85% chocolate over the top of the cake. The flavour was predominantly of the orange zest; as usual the white chocolate added vanilla notes and the sweet potato seemed to add colour and texture rather than much flavour.

I'm quite disappointed that the vegetable cakes I've made recently have been heavy. I use a carrot cake recipe which always produces a light cake, so perhaps I should just vary the vegetables in that, rather than trying to find different recipes. 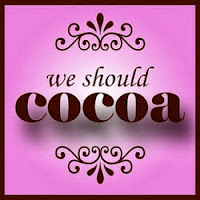 We Should Cocoa was started by Chele from Chocolate Teapot and Choclette from Chocolate Log Blog, and the rules can be found here. This month, the theme of pairing chocolate with vegetables was chosen by guest host, Jibber Jabber, who is accepting entries by Linky this month, and will do the usual round up at the end of the month.
Posted by Suelle at 07:45

did you cook the sweet potato first? I find that if you use raw ingredients they tend to be lighter in texture, saying that I do love a dense but moist cake... this is gorgeous and what a colour!

Thanks for entering this month's We Should Cocoa and trying out a different recipe. No premonitions on the Great British Bake Food! In fact I'm still a couple of weeks behind and I haven't watched that episode yet. Sweet potato can be tricky to bake with but I'm sure it tasted great. Love the addition of the extra chocolate on top.

Thanks for entering We Should Cocoa. No premonitions on the Great British Bake Off! In fact I'm a couple of weeks behind so I haven't seen that episode yet. Sweet potato can be tricky to bake with but I'm sure it tasted great. Love the addition of the extra chocolate on top.

The colour of this cake is superb Suelle. I've never baked using sweet potato, so I'm not quite sure how it might behave. I'm unable to melt G&B white chocolate properly and always have to cream it well with the butter and sugar which generally sorts it out. I've got other brands to work by melting over a very gently heat - nowhere near boiling. Good to see you back with We Should Cocoa :)