It's been a long time since I posted. I haven't been baking much, and what I did bake was nothing new - I seemed to need ease and reliability rather than experimentation. Perhaps that's a sign of the times; the unfamiliar is too worrying!

I hadn't even done any festive baking in the run-up to Christmas; my daughter has embraced making mince pies as her contribution to Christmas feasting and it's sometimes easier to buy small amounts of treat-type food when you're on your own, and watching your weight - a packet of stollen bites or mince pies can be spread out over a few days, and a pack of individually wrapped biscuits lasts even longer.

I had already planned to make a cake for Boxing Day, so that I could share it with the children and they could take the major part of it home with them. I'd also already planned to make Nigella Lawson's Cider and 5-Spice Bundt cake, to get away from chocolate and dried fruit, so when I received a new bundt pan as a present from my daughter it seemed that serendipity was playing a part! 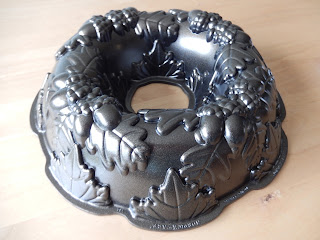 The design of the pan is called Autumn Wreath, so it didn't look very festive, but I decided that really didn't matter, as I could cover everything with frosting and festive sprinkles if I needed to. Fate took a hand there, too, as I didn't have enough icing sugar to make enough frosting to completely cover the cake, but as you can see from the photos, the design didn't stand out really well on the dark cake. In the end, a drizzle of glacé icing was enough to confound the eye, so that all you saw was a wreath-shaped bundt! Unfortunately the lighting conditions weren't right to get a photo of the cake at that stage.

I really love this cake - it's very similar to a gingerbread but the 5-spice gives a savoury edge to the flavour. It was the first time I'd made it for the children and they both liked it too, and were eager to take their share away with them. 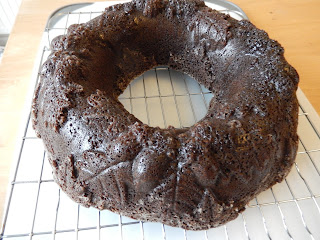 I'm going to try the pan again soon with a light coloured cake, to see if the details of the design show up better. The design is quite shallow, but I expected the pattern on the cake to be crisper. A closer look at the photo shows a lot of tiny holes on the surface of the cake, so I think the light texture of the cake contributed to the disappointing finish. Hopefully the right recipe will show an improvement in the appearance.
Posted by Suelle at 10:46