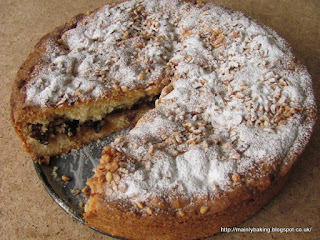 This is just the right sort of cake to make in the run up to the festive season. Although it's not the sort of rich or fancy cake that will be eaten around Christmas and New Year, the flavours are good enough to put you in the festive mood, without feeling you are over-indulging too early. It's also a really simple cake to make and one I often fall back on when I'm lacking in imagination or time, especially as my husband always comments on how good it is.

The filling in the middle can be adapted to suit the seasons and the recipe also works really well with fresh fruit, as long as it doesn't exude too much juice during cooking (although even that can be overcome by cooking and draining the fruit first). For a taste of Christmas I used a mixture of mincemeat, dried pears and fresh apples - adding apples cuts through the sweetness of the mincemeat. Using the dried pears was a waste of good ingredients, however, as their flavour was overwhelmed by the mincemeat. 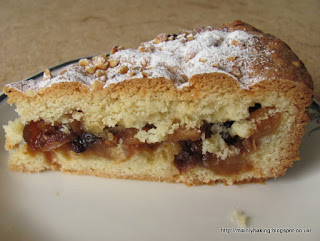 Mix the diced apples and dried pears into the mincemeat and set aside - the acidity of the mincemeat should stop the apples from discolouring.

Melt the butter (I find it easiest to do this in a large mixing bowl, in the microwave, then the dough can be mixed in the same bowl). The butter doesn't need to be hot, just completely liquid. Stir in the  caster sugar, then the beaten egg, then mix in the flour to make a soft spreadable dough. 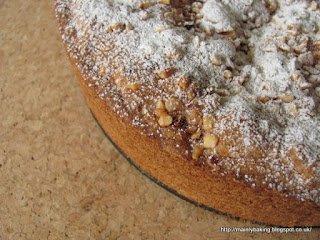 Use the remaining dough to top the cake. (The easiest way is to flatten small pieces of dough with your fingers and put them on top of the cake filling, fitting them together as closely as possible but getting an even covering too. It doesn't matter about small gaps as the dough spreads and fills in the holes during baking. I usually start at the edge of the cake and work inwards - the dough is pliable enough to spread easily.)

Sprinkle over the chopped hazelnuts, then bake for 50-60 minutes until firm and golden brown.
Cool in the tin, then dust with a little icing sugar before serving.

This was my last baking session before starting on the Christmas desserts tomorrow, so I'll wish you all


MERRY CHRISTMAS
and
A HAPPY AND HEALTHY 2016!

The cake isn't quite as light as a sponge, Dom, but it's nice to have a 'built-in' filling!

Merry Christmas to you too!

This is a great way of using up my spare jar of mincemeat. Merry Christmas x

I like the sound of this a lot. I've made mincemeat cakes before but I've never combined them with apples. I'm sure it's great as a pre-Christmas treat but it also sounds perfect for a post-Christmas bake now that my local supermarket has started selling off mincemeat cheaply. (Yes I admit that I didn't get around to making my own mincemeat yet again this year). Happy New Year.