Tea Time Treats is a new challenge jointly hosted by Kate at What Kate Baked and Karen at Lavender and Lovage. Obviously the baking side of treats for tea time is what appeals to me, but anything that could possibly be eaten at tea time can be entered into the challenge, which gives a pretty wide remit. Each month there will be a theme for the challenge and in December what better theme could this month's host, Kate, pick than Christmas?


The recipe for these Orange and Pistachio Stollen Bars, by Dan Lepard, was published in the Guardian Weekend Magazine a few weeks ago, in the Christmas Party Food Supplement  and had instant appeal for me, as I love Stollen but am rubbish at yeast doughs - even Dan's recipes! This unusual take on the traditional recipe is raised with baking powder and contains large lumps of marzipan throughout the mixture - utter bliss! As Stollen is usually only eaten around Christmas time, these bars seem ideal for the Tea Time Treat challenge. 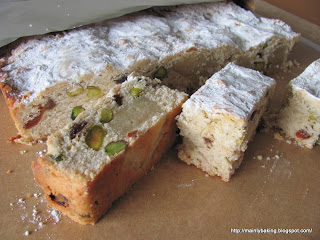 Although I liked all the flavouring ingredients in the bars, I was tempted to swap the sultanas for dried cranberries, as they seem more festive and seasonal. In the end I decided to stick by my view that unless something serious like an allergy forces a change, every recipe should be tried as the cook has written it, at least for the first time.

The recipe was straightforward and quick to follow, so within an hour of starting to assemble the ingredients, I had a fragrant tray of stollen cooling on the counter, ready for brushing with melted butter. The only forethought required is to get the butter, cream cheese and egg out of the fridge to bring to room temperature. As I didn't expect to have to keep the bars a long time, I only used about 25g of butter to 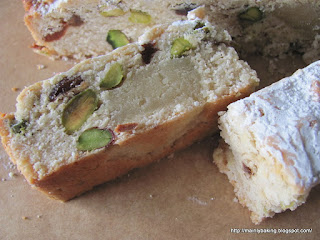 brush on top - this seemed to me to give a generous coating anyway.

When it came to cutting and tasting, I was glad I had kept in the sultanas, as the flavours of orange and pistachio are very delicate and would have been overwhelmed by dried cranberries. I loved finding such large pieces of marzipan nestled within the bars. The texture of the bars is hard to describe - it's somewhere between a cake and a biscuit, doughy like a bread but quite light and open textured too. After a night's sleep I realised that what it most reminded me of was biscotti dough before the second baking!

I'm sure these will be repeated, although I already have two bought Stollens stashed away for 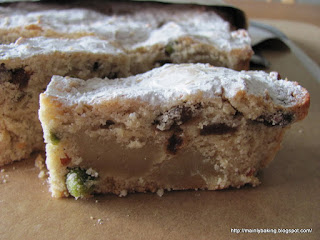 Christmas and New Year. Hubs liked them, but he didn't think they matched up to a traditional stollen so I might need to call them something different next time. I thought they were comparable, in texture, to some of the stollens I've bought in the past, but not as good as a slice of stollen with a really big piece of marzipan in the centre, which is what Hubs missed most too, I think! However, for a homemade treat, these are quick, unlike yeast dough, and successful, unlike most of my attempts at yeast dough.
Posted by Suelle at 16:29

oooh, they look so pretty. I'm not crazy for the texture of Stollen but this does look really good. Good old Dan strikes again x

As a fellow marzipan lover, I would of course like these. Hard to beat a traditional stollen, but I'm very willing to be convinced. They look very pretty.

I used to detest marzipan, but last year found myself getting reacquainted with it albeit through a bite of a stollen. I am intrigued by the flavours in this one, sounds lovely and look lovely.

Thank you so much for entering such a delicious recipe Suelle! I too made this last weekend- and it was a huge hit. I think it will become a firm festive favourite every year...

ooh these look great especially the colour of the pistachio nuts. Very festive :)

Looks gorgeous. I really like the contrast that the bright green pistachios give to the appearance. Great that you've found a stollen recipe you can get on with. Truly festive!

I love the sound of these. I adore marzipan so those large chunks look delicious. I like how its not a yeasted dough and more cake like. I expect it will be easier to make Gluten free. Hurrah. Must try it.

Oh they look tasty don't they? You did a fabulous job there. x