Gingerbread with Lemon and Ginger Buttercream

The smell of gingerbread baking is another seasonal scent which is really uplifting - one of my favourite Christmasssy smells. 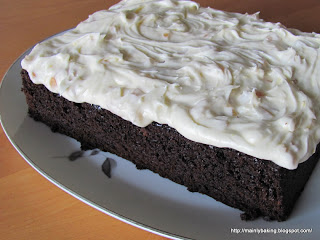 This was going to be an unfrosted plain gingerbread, but the first bite told me that would it be a mistake to leave the cake as it came out of the baking tin! The molasses was so overwhelming that the cake was quite bitter. Add to this the fact that there wasn't enough ginger in the recipe and the flavour of the cake was quite disappointing. However, the addition of a lemon and ginger buttercream perked it up a lot and counteracted the bitterness. I found the recipe here, while trawling the internet looking for a recipe using oil.

I made the buttercream by beating 70g of unsalted butter and 40g full fat cream cheese with 200g icing sugar, the zest of a lemon and 2 tablespoons of syrup from a jar of preserved ginger. I then folded in three nuggets of preserved ginger, finely chopped. 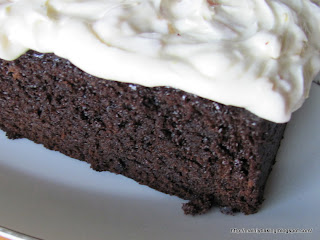 Leaving aside the flavour, this was a really well textured cake, and won't need much adjustment to make it worth repeating - I'll try replacing half of the molasses with golden syrup, and at least tripling the amount of ginger. I think a flavourless oil such as sunflower would be better too, as the other flavours are so strong - any flavour inherent in the olive oil is lost.
Posted by Suelle at 13:26

I would never have guessed that was a ginger cake! I thought chocolate for sure. That buttercream sounds gorgeous though.

It is very dark, isn't it, which is why I think I can reduce the molasses, add some golden syrup instead, and still get a dark cake.

This looks lovely Suelle, quite Christmassy with that lovely fluffed up snowy icing contrasting against the dark cake. The buttercream sounds delicious too.

Hope you have a lovely Christmas

I love the sound of the bttercream contrasting against the slight bitterness of the cake - so often buttercream is just sweet on sweet. I love gingerbread, very festive!

There's a lot of molasses in that recipe but what a great colour. I really like the idea of balancing the flavour with a buttercream that also contrasts with the colour. Great time of year for gingerbread. Have a lovely Christmas.

So interesting because it looks very good. That dark cake and the creamy fluffy topping. I bet you still ate it all anyhow! Merry Christmas xx

You can't beat the aroma and flavour of strong gingerbread and molasses for christmas. Looks fab

Gosh - I know a few people who would fall nose first into that bad boy!! Like Katie said, you just can't beat that smell of gingerbread baking at this time of year.