My second Easter bake, for my son, who would rather eat chocolate than dried fruit, was a variation on this recipe from The Baking Explorer. At the end stage of making the batter, I stirred in 150g of chopped plain (70%) chocolate. 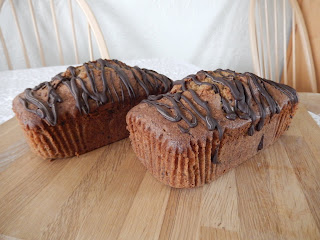 In order to share the cake with him, I decided to bake it in two 1lb loaf tins, and guesstimated that this would reduce the cooking time by 15 minutes, which turned out to be correct!

As I would be wrapping the cake to take it to him, adding a buttercream topping didn't seem a good idea, so I just dribbled some more melted chocolate over the cooled cakes. 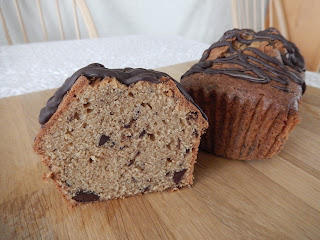 As usual, I was disappointed that the Biscoff flavour wasn't stronger, but even though I anticipated this, I decided not to add any extra spices to the cake, as I didn't want the flavour to fight with the chocolate. In the end it was a good balance  between the very subtle spices and chocolate. A little vanilla extract might have been an improvement!