These are big cupcakes, bursting out of muffin cases! This recipe came about as a result of having only 80g of blueberries left over from another recipe. Not enough for blueberry muffins, or any other sort of cake where blueberries were the main feature, but with added flavours there should be enough to taste.
I quite liked the pairing of pears with blueberries, in a cake I made a while ago, so decided to repeat that combination, adding some hazelnuts to a crumble topping for added crunch and flavour. 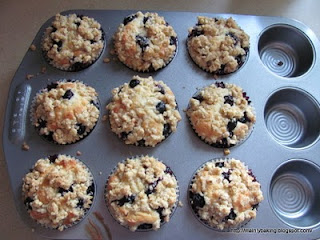 150g SR flour
50g full-fat Greek style yogurt
1 pear, peeled cored and chopped into small pieces
80g blueberries
for the topping:
55g salted butter
70g plain flour
50g demerara sugar
25g finely chopped toasted hazelnuts
Method
First make the topping by melting the butter in a small bowl(microwave) or pan(hob), then stirring in the other ingredients. This gives a soft dough, which you will be able to crumble, once it is cool.

To make the cupcake batter, put all the ingredients, except the pears and blueberries, into a bowl and beat until well mixed and smooth. Fold in the chopped pears.


Distribute the batter evenly between the muffin cases, filling each one to just over halfway. I got 9 cakes out of this amount of batter. Divide the blueberries between the cupcakes, sprinkling them on the surface and pressing down lightly with the back of a spoon to flatten the mixture and embed the blueberries.
Use your fingers to crumble the topping dough over the cupcakes, as equally and evenly as possible. 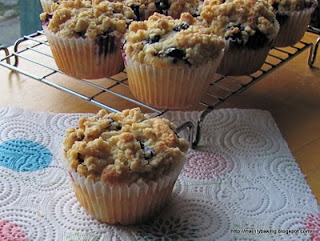 Bake for 25-30 minutes, until firm and golden brown. A probe will come out clean. Cool in the pan for a few minutes then move the cupcakes to a wire rack to finish cooling.
This recipe worked very well - the pear stayed evenly distributed throughout the batter, and putting the blueberries between the batter and the topping meant they didn't sink, and also gave some colour to the cupcakes. The crumble topping worked well, as it always does, adding a contrast in texture and some extra flavour to the cake. I've previously only used this recipe with added chocolate, and without it the cupcakes weren't quite sweet enough. In future I'll add an extra 25g sugar to the batter.
Posted by Suelle at 18:56

oh god these look good... but no goodies till Christmas eve!

I admire your restraint, Dom. I'm feeding one extra at the moment, so unless I want to bake more often, I have to eat less! Should work, in theory!

Look delicious Suelle. I really like the idea of a crummble topping on a cupcake, any alternative to giant swirls of buttercream is more than welcome!

They look great - I could fall nose first into one warm from the oven with a cuppa right about now!

Joanna - I'm not keen on heavy frostings, either - adding just sugar and fat seems a wasted opportunity, and is often too sickly for us. I've only made one or two cakes where the frosting seemed necessary - Dan Lepard often makes them an integral part of the flavours of his cakes, rather than just a sugary add-on.

Chele - thank you! I'd gladly make you a cuppa if you were here! :)

I like the idea of the hazelnut crumb topping, Suelle. They look delicious.

I am currently on a blueberry kick so these are really calling to me!