Following on from a cake for eating with coffee comes a cake containing coffee. Confused? You will be, as this one doesn't even taste of coffee! I'm sure the coffee made a difference to the flavour, and that the same cake made with milk or water would taste different, but the coffee does not make its presence known in a big way here. The flavour of the cake is very similar to gingerbread, but the spicing is more subtle, as there is more cinnamon than ginger and the other spices, although used in small quantities, have a big flavour. Overall it's not as heavily spiced as most gingerbread, where the hit from the ginger can be quite powerful.
I followed this recipe, the only difference being a substitution of butter for shortening. I baked the cake in my new springform tube pan, and it cooked a little faster than the time given in the recipe - perhaps because it was shallower than if I'd used a bundt tin.
Then I ruined the cake!
I'm a cake maker who started cooking almost before non-stick baking tins existed, so I don't really believe they are going to work. I like springform tins because you can loosen the cake round the edges and take the side support off, and it doesn't matter if the base is stuck - just leave the cake on the base for serving! Or you can use the belt and braces approach of lining the base with parchment or silicone. My new springform tube tin is non-stick, but I still greased and floured it well, particularly the base and tube, mindful the the cake couldn't be left on the base.


After removing the cake from the oven and leaving it to cool for about 15 minutes, I unclipped the side of the tin. I then realised I had no idea of the best way of getting the cake off it's base and the inner tube which protruded upwards well above the level of the cake. I tried to cushion the cake with a cloth as I turned it over, hoping that I could invert it fully before it moved. No such luck! As I turned the cake I could feel it slipping off the tube and falling downwards. By the time I'd got it flat on the cloth, on a solid base, it was cracked through in several places, and still too hot to move. By the time it had cooled enough to move, it was stuck to the cloth! Double disaster! 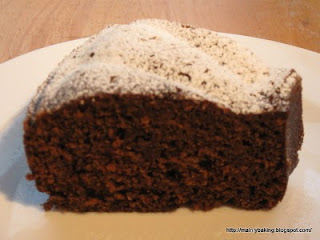 I'm still not sure how I should have done it; probably left the side clipped on and inverted the cake in the complete tin. Perhaps the cake crumb was too delicate to survive being turned out like this, even if I'd done it better.

Despite it being in several pieces I managed to salvage a piece to photograph, and fortunately it was just for the family, so I didn't have the embarrassment of it being on show.
Although the cake tasted very good, I'm not sure it has enough advantages over my traditional gingerbread recipe, which is much easier to make, to bother using again. It would be simple to use this spice mix in my old recipe, instead of just ginger and mixed spice.

Interesting to have a coffee cake that doesn't taste of coffee - as a non coffee lover, I approve! It still feels like cheating to me, having spent so many years lining cake tins and having various disasters when turning them out, but my silicone cake thingies are wonderful - my tins have all been banned to the back of the cupboard.

This looks delicious - you got there in the end :) Things like that are always happening to me!

That's interesting, Choclette. I bought some silicone bakeware moulds when they were first introduced and although I get on fine with the small moulds - tartlets and individual cakes - the large one wasn't as easy to use, which put me off trying any other moulds for full sized cakes. I've also heard(read) others say that floppy, bulging sides can be a problem with large moulds.

I haven't had any problems with the large moulds as long as I put them on a baking sheet and pick up the baking sheet rather than the mould. It must have taken a bit of getting used to at first, but I've been using them for quite a few years now and am very happy with them.

Oh how annoying for you, Suelle! It looks like a very nice cake nonetheless...

Choclette, I haven't had much luck with silicon, except with some canele moulds that a friend sent me from Paris. Other than that, I've found the texture of cakes cooked in silicon tend to taste more steamed than baked, and I don't get a crispy exterior? Am I missing a step in the process?

Celia - no tips to give I'm afraid. I just make the cake as normal, in it goes and usually comes out just as I'd like it to. I do have problems with my oven so sometimes overcook, but not with the silicone moulds.

I don't think it looks ruined - it looks delicious. I light dusting of icing sigar soons covers any cracks. The coffee probably added a depth to the spices. Sounds yummy

I must try again - thanks Choclette! :)

I can imagine that the coffee intensified the flavour of the molasses and spice, without much of a presence itself.

That slice looks lovely, so thank you for owning up to the disaster!

Thanks for your comments, Katie and Foodycat. That slice was about the biggest piece that I could salvage, with careful trimming, for the photograph - the rest was just eaten in chunks!