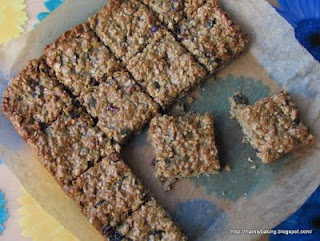 This Dan Lepard recipe for flapjacks using tahini and condensed milk had a mixed reception. Hubs and I both really liked it, but I had made it primarily for FB's lunchboxes, and she didn't like it one bit! Which left us with a lot to eat, when we are both watching our waistlines, in a bid to stop further expansion. FB is not happy with lots of nuts, and, although I used mixed seeds instead of the nuts in the recipe, to her, the combination of tahini and the seeds tasted 'too nutty'.
The point of using the tahini, if you look at the link, is to reduce the amount of butter used, but there is still an awful lot of sugar in this recipe - so it's not for the calorie conscious! As usual, I made a few changes to the recipe, out of necessity - to replace the walnuts I used 50g each of pumpkin and sunflower seeds, and in place of 100g dates I used a mix of equal parts of dates, sultanas and cranberries. I used the full amount of oats mentioned and baked the flapjack in a 20cm tin, but think a slightly larger one would have been better - perhaps 22cm. 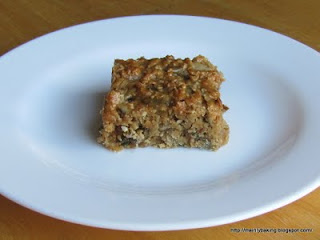 As I said, Hubs and I really liked this flapjack - the basic flavour was exactly like the sesame halva which my mother-in-law used to put in food parcels when she visited us*, with the added bonus of more textures and flavours from the oats, dried fruits and seeds. The fudginess produced by the tahini, sugars, butter and condensed milk makes these much different to most flapjacks

* My nominally Jewish MIL, with whom I had a very good relationship, was a fantastic cook and inspired me to cook properly when Hubs and I first married. She insisted on giving food parcels on visits - some delightful goodies like smoked salmon, salami, halva, biscuits and homemade cheesecake, but also nasty chocolates imported from Israel and manky over ripe fruit bought cheap at her local markets. We had to thank her nicely, wait until she had gone, and then ruthlessly throw a lot of the stuff away!
Posted by Suelle at 08:46

I love the idea of the fudginess created by the tahini, condensed milk and sugars but have sympathy with FB regarding things tasting too nutty, even when there are no nuts in them. It must be a conditioned response, and is partly the reason why I've held off making these - I'm just not sure about sesame as a flavour...

They look fab though, and at least you and your hubs like them, even if you don't want to have to eat them!

I think you're right about conditioned response, C. FB's allergy is only to peanuts, but the only nuts she will eat, in small quantities, are hazelnuts and almonds - and the almonds have to be ground!

It might be wiser for you to avoid these - it would be a shame to not like them.

Oh, what a good idea to use tahini in flapjacks - good old Dan. I'm always a bit wary of using condensed milk though because of it's sweetness. Still fudgey flapjacks sound interesting and yours looks like I'd like to have one with my cuppa right now. Shame your food parcels were such a mixed blessing, but at least you got some benefit and the love that went with it.

As someone who could (and, shamefully, has) eat tahini and condensed milk from their respective jar/tins, this sounds heavenly. Your MIL's parcels sound great - I don't get any from my MIL, but she regularly gets them from hers and they go straight in the bin for food safety reasons! Sounds mean, but you only need to get sick once to learn your lesson... have a great week!

Shame FB didn;t like it but I think the combo sounds lovely and very different from normal flapjack recipes. You can send some to me if you like ;0)

I've had these bookmarked for ages, and this has convinced me. They look wonderful!

They sound really delicious. Another great DL recipe to try.
What a shame that FB didn't like them.

I made these last night, and I have just eaten the first one. I used the full amount of oats, but I think I should have used more, and possible baked them longer. They are very, very gooey. I love the flavour though.

Hi Foodycat - it's really strange that people follow the same recipe and get such different results, isn't it? I wouldn't have described the ones I made as 'very, very gooey'. We just have to remember the changes needed for next timne!