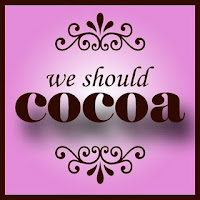 The added ingredient for this month's We Should Cocoa challenge is coffee. Coffee is a lovely pairing with chocolate but you do have to be quite careful to get the flavour of the coffee to stand out. Too little and you just make the chocolate flavour more intense without tasting the coffee.

This recipe for Mocha Fudgy Brownie Slice is on the borderline - you can taste the coffee but it's not really strongly coffee flavoured. I've added the name 'slice' to the recipe to account for the fact that this brownie recipe is baked on a shortbread biscuit base - I just didn't feel able to call them 'brownies'. 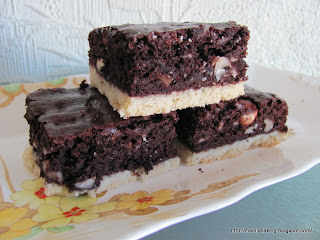 The brownie batter is unusual too, as it's based on a can of condensed milk and cocoa; I expected it to be less cakey than it turned out, and more like a fudge layer on top of the biscuit, although I used the longer cooking time. 5 minutes less might have left the brownie more gooey. I followed the recipe exactly, although I'm not sure my conversions to metric weights were spot on, and I only had 100g hazelnuts. After conversion the ingredients for the shortbread were almost the classic 1:2:3 proportions of sugar, butter and flour, so that's what used - 50g caster sugar, 100g butter and 150g plain flour.

This was a delicious bake, and a change from the usual brownie recipes. Considering that it was a cocoa-based brownie batter, it had a very rich flavour, rounded out by the coffee notes and the crunch of hazelnuts. Cut more neatly, in smaller pieces, these would be lovely as part of an afternoon tea - the richness of the brownie was offset by the plainer shortbread layer. The only criticism, from FB, was that she would have preferred the hazelnuts to be chopped into smaller pieces. I had left most of them in half-sized pieces, in an effort not to make them too small - I just can't win! 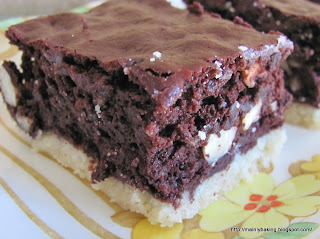 The recipe suggests 36 pieces but I cut the 8" square into 20 pieces - and FB and CT still ate 2 pieces each! I find many American recipes are unrealistic about the yield in numbers - perhaps it makes people more likely to cook the recipe if they think they will get a lot out of it, but they must then go on to eat more pieces! A 36th piece of this would only be two bites.

The We Should Cocoa Challenge is hosted jointly by Chele from Chocolate Teapot and Choclette from Chocolate Log Blog, although this month's challenge was set by guest host Lucy from The KitchenMaid, who chose coffee as the ingredient to be added to our chocolate cooking. The round-up of entries will be on Lucy's blog at the end of the month.
Posted by Suelle at 09:12

Labels: biscuits and bars, brownies/blondies, chocolate, hazelnuts, We Should Cocoa

This is a first time m seeing a shortbread biscuit base for a brownie. By the look of it, your brownies/slices turned out great. Would love to have a slice or two :D.

As a coffee/chocolate/brownie/shorbread lover, I think this recipe is right up my alley! These look just delicious. Really, really good!

These look and sound delicious, and yours look way better than the ones on the original recipe page!

What a great idea to have a layer of shortbread underneath. Looks so good.

Looks great - nice idea to have the shortbread base underneath the brownie, I bet it adds a good textural contrast.

Love your brownie slice, such a great idea! I love chocolate and coffee together. I agree about American recipe yields!

These look a real treat. I can never quite decide how big to make chopped nuts, but bigger is much better than fiddly little crunchy bits I'd say.

Love the addition of shortbread on the bottom - definitely makes it a "slice"! I think coffee makes almost any baked treat taste better!

Those look very delicious! The name attracted me instantly and it really isn't disappointing.

This is really unusual Suelle. I've not seen a brownie on top of a shortbread base before - I'm finding it hard to imagine. I guess I will just have to try it out for myself. And if the coffee isn't too strong I might even like it ;-)

Thank you for being a We Should Cocoa stalwart, it's much appreciated.