I'm not usually a contributor to Dom's Random Recipes, over at Belleau Kitchen. It's often difficult to fit a randomly picked recipe into my cooking plans and the blog theme, without a lot of cheating fiddling which takes away the genuine randomness. This month, however, Dom has paired up with Tea Time Treats, which is more my cup of tea (pardon the pun!). The idea is to pick a random book containing recipes suitable for tea time goodies, then a random recipe from that book. For me, this turned up Bea's Thumprint Cookies, on page 66 of Green and Black's Chocolate Recipes (Unwrapped). I was pleased with this as Thumbprint Cookies were on my to-do list, but I keep setting them aside as too fiddly! 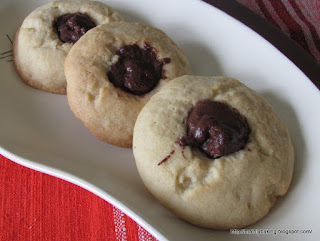 This particular recipe was for a plain cookie filled with Nutella, or a similar chocolate hazelnut spread. The only change I made to the recipe was to add some vanilla extract to the cookie dough. I also refrigerated the dough for the suggested 1 hour resting time, although the recipe didn't ask for this. The instructions in the recipe said to roll the rested dough into balls, then flatten before making an indentation to fill with Nutella. I did this but wasn't happy with how far the cookies then spread during baking - they became quite flat, with the later cookies spreading even further than the first ones shaped, perhaps because the dough was warming up by then.

I've since read other recipes and none of them flattened the balls of dough before making the hole and adding the filling, so this is an obvious change needed if I made the recipe again. I think I would also re-chill the cookies after shaping and filling, before baking them, in an effort to stop them spreading and give them a better shape.

The cookies took almost twice as long to bake as suggested in the recipe (20 minutes instead of 12), but part of that could be down to my failing oven - I've lost the fan function, and the instructions say that I should only use one tray at a time if using conventional cooking. Of course, I put in both trays of cookies and hoped that swapping positions at half time would be good enough - it wasn't!

However, there was nothing wrong with the flavour, which everyone enjoyed, although there were comments that more filling would be better! Again, I think this would be possible with the different shaping method. Now that I've tried these, I want to give them another go, with the shaping modifications, to see if I can improve the outcome, but otherwise they are a pretty fiddly way of making biscuits! 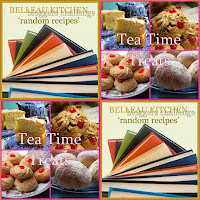 You can follow the links above to find out about Random Recipes; the other part of the challenge is Tea Time Treats, which is a monthly baking challenge to provide goodies for the tea table, hosted alternately by Karen from Lavender and Lovage and Kate from What Kate Baked. This month it is a joint venture with Random Recipes, as explained previously.
Posted by Suelle at 21:52

oh but i'm just so glad you did take part this month because these are glorious!!... and it wasn't too hard was it?... and a little bit of fun i'm sure... thank you so much, it's more than appreciated!

They look delicious, I love the idea of a Nutella filling.

What a great recipe. I am totally loving the thumbprint cookies these days.

Thumbprint cookies always looks so good and yours are no exception, but I do agree they are fiddly. I made some a while back and ended up omitting the filling as I ran out of time - they were still delicious.

I'd never even heard of thumbprint cookies before! I think I could wolf the whole lot... It's years since I had nutella and won't be able to think of anything else all day!

Oh, I haven't made thumbprint cookies, but perhaps I should - it would help use up some of my jam mountain. These look great.

FABULOUS entry and thanks for joining in with the fun with our combined challenge! I LOVE these wee biscuits and I haven't made them for ages, but I will now having seen yours! Karen

These sound lovely. Funnily enough, I've very recently picked up a copy of this book (at a charity shop) so I've got to get around to trying this and some of the other recipes.

These look wonderful! I know my daughters would love them as they are huge Nutella nuts. :) Can't wait to give them a try.

Oh ... have just recently made thumbprints with black cherry jam, but Nutella sounds all the better! flattened my thumbprints out a bit too to accept the jam a bit better ...

These look really delicious - sometimes simple biscuits are the tastiest!