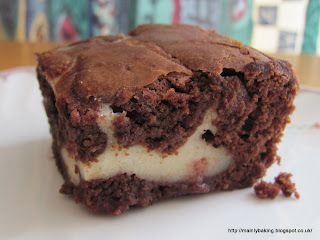 This was a recipe which didn't quite work, but which was so tasty that it will be worked on to achieve an improvement. The only problem was the brownie batter - I chose one of my favourite low saturated fat recipes which was too thin to support the weight of the cream cheese mixture and the blobs of morello cherry jam.

I've previously had success with making cheesecake swirl brownies using a brownie batter made with mayonnaise, but I didn't have enough mayonnaise in stock to use it this time. All I wanted to do was repeat this recipe adding some teaspoons of cherry jam swirled into the brownie mix with the cheesecake, but you can see from the second picture that although the cheesecake swirls weren't too bad, most of the jam sunk straight to the bottom of the tin, and sat in separate blobs after the brownies were cooked. 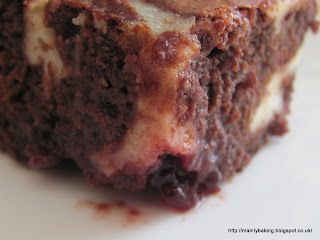 To be honest with you, the only way we could eat the brownies easily was to serve them upside down, and a lot of the jam had to be scraped off the non-stick baking paper and put back into the holes left in the baked brownies.

But they were delicious - the flavour of the rich, sweet cherry jam was stronger than the brownie flavour, but the plainer cheesecake swirls in the brownie helped balance the flavour and sweetness. Definitely a recipe worth working on, particularly as I know exactly what went wrong.
Posted by Suelle at 19:53

Sounds delicious! Certainly one to be perfected into something amazing!

I think cherry jam is my favourite. And I do love cheesecake! These sound gorgeous, even if they weren't a complete success.

It certainly sounds and looks fabulous, Suelle. Love the chocolate and cherry combination! :)

It certainly sounds and looks fabulous, Suelle. Love the chocolate and cherry combination! :)

Oh yes Suelle, these brownies definitely sound worth working on, the different flavours and textures here must be wonderful.