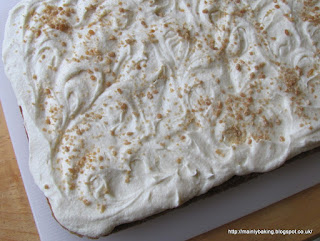 This recipe was a the winner of a Good Food competition to create a birthday cake for the magazine's 20th birthday in 2009. I've been wanting to bake this cake since then, but haven't had the coincidence of both maple syrup and parsnips available at the same time, until this weekend. It's true, I could have made the effort to get the ingredients together, but it's only been a passing thought whenever I notice the cake in a recipe search.

As this month's Tea Time Treat's challenge was to celebrate it's first birthday by baking a cake, this recipe seemed quite appropriate, as it was created with celebration in mind. 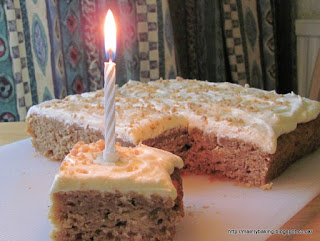 I didn't want a layer cake, though, and also didn't want a fresh cheese frosting, so I baked the cake as a traybake, in a 20 x 30 cm (8 x 12") tin, and topped with a light buttercream recipe. The only change I made to the recipe was to use 50g chopped toasted hazelnuts instead of pecans, to suit my daughter's dislike of some nuts. Because the tin size I chose made a deeper cake than if it was baked in two sandwich tins, it took a little longer to bake - about 40 minutes in total. My buttercream recipe was based on that in the Hummingbird Bakery Cookbook, which uses only 80g butter to 250g icing sugar. I added two tablespoons of maple syrup and a teaspoon of vanilla extract as a flavouring, and then sprinkled the frosted cake with maple sugar crystals. 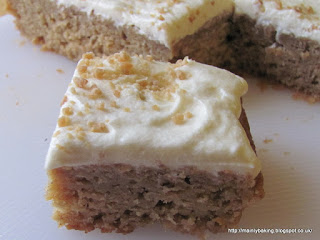 This cake was very moist and quite dense (but not in a bad way!). I'm glad I baked it as a traybake, as I'm not sure that I would have liked it as a layer cake - I think it was a bit too moist for that. FB reckoned she could taste the parsnips, but I'm not so sure - to me, the grated parsnip and apple added moisture and texture rather than specific flavour. Even the maple syrup wasn't a strong flavour in the cake, although I could taste it in the buttercream. In the cake, the parsnip, apple, mixed spice, maple syrup and orange seemed to blend into a unique flavour, rather than any one of them being separately identifiable. The unique flavour was a very good one, however!

Tea Time Treats is a monthly baking event co-hosted by Karen at Lavender and Lovage and Kate at What Kate Baked. Each month the challenge is to produce something which celebrates the (almost) lost ritual of the tea-time; this month the host is Karen, who has chosen cake in celebration of a whole year of baking for Tea Time Treats! She will be publishing a round-up at the end of the month.
Posted by Suelle at 16:20

This is lovely, a rustic and unusual combination of ingredients (haven't heard much of parsnip in recipes). I think a square of cake would be delicious with a cup of tea, the perfect tea time treat x

oooh, out come the vegetable cake recipes... I love it, it looks so unctuous and full of sweetness... bet the added maple syrup really made this wonderful... beautiful frosting too... slice on it's way to me i assume?

This sounds delicious Sue once I get all the ingre I shall bake as traybake:)

Looks great as a tray bake. I have made the full version of this a few years ago and its fabulous! I really must try baking with parsnip again

I've used other veg in cakes, but I don't think I've ever used parsnips. This sounds like an excellent set of flavours. Lovely traybake.

Love the flavour combination, and a great idea to make it as a traybake. Haven't tried baking with parsnip, but you have inspired me Suelle.

I think I have this recipe buried in my magazine clippings file! Glad was a success, I've baked bread very succesfully with parsnips in so am very sure I would equally like it in cake form!

Thank you very much for entering such a fantastic bake into TTT for our very first birthday!! I too have this recipe bookmarked and looking forward to trying it after your success!

I can't believe you beat me to it ;-) I made this a few days ago and was thinking it would be perfect for TTT and you've posted it already! I do really, really like it as a cake though - you're quite right that it's definitely the case that the result is more than the sum of the parts. I was surprised to find that I couldn't really taste the maple syrup at all. I wasn't expecting to taste the parsnips (and I didn't) but overall it was such a great cake. I'll definitely make it again. I used a vanilla buttercream with mine, but should probably have used a maple syrup buttercream. Great minds think alike (and I won't complete that saying...!)

Caroline - what a strange co-incidence! But you should still post your cake to TTT.

What a FABULOUS birthday cake for Tea Time Treats, thanks so much for baking this for Kate and I, and THANKS for lighting the candle too! I love the idea of adding parsnips to cake as they are sweet, and I bet this was just amazing! Karen

How funny that you and C should both make the same cake. But they are both very different. I just need to try a slice of yours and a slice of hers so I can see just what effect those differences have.