I have to report that the second recipe I choose to make from the book, Pure Vanilla, which I reviewed recently, was a total disaster. Firstly,  the flavour wasn't to my taste - the cookies were far too sweet, and the vanilla salt topping didn't help to offset this. If the recipe had worked well, then I would have just put this down to differences in taste preferences, but the recipe was a complete failure too, and initially I couldn't see anywhere in the method or ingredient quantities where I might have made a mistake.

The cookie dough spread in the oven, as far as it was possible to spread - the cookies were almost thin enough to make tuiles! In addition they didn't cook properly;  it appeared to me that the oats hadn't absorbed any of the dough ingredients, leaving the cookies raw-looking and greasy. They were neither crisp nor chewy, just a mess of half-baked goo which fell apart when handled. I left the cookies in an airtight tin overnight and this morning there was just a heap of damp cookies which had slumped and melded together.

The only thing I can see that might have caused the problem, rather than the recipe itself, is that I used whole rolled oats, rather than oats labelled porage oats, which is what I usually use for baking. The recipe itself suggested 'old-fashioned rolled oats'. It might be that in a short baking time these whole oats couldn't absorb enough of the butter, sugar and egg mix, leaving only the smaller quanity of flour to do this, unsuccessfully. Unfortunately, given the cost of the ingredients, and the fact that we didn't really like them, I don't feel inclined to repeat the recipe with different oats. If anyone wants to try the recipe for themselves, get in touch and I'll send you a copy. 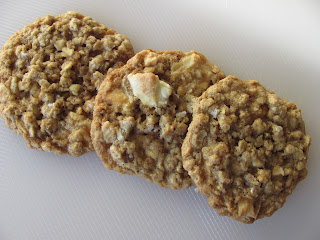 At the moment, I'm trying to dry out the cookies in a low oven, in the hope that I can use the broken morsels for something such as 'compost' cookies, which often use remnants of broken biscuits, potato crisps(chips) and breakfast cereals for added flavour. I do have a photo, but it doesn't really do justice to how bad these were!
I'm really disappointed that this recipe went so badly, but I do realise that I may have used an ingredient which wasn't going to work. I hope this is the case, as the first recipe I tried worked so well, and I want to try other recipes in the book.
Posted by Suelle at 11:33

It's a shame when recipes in books turn out terrible, and there are quite a few books out there with incorrect recipes. At least the pictures of your cookies look good! better luck next time x

That's a shame - I've just bought that book so will take heed of your experience!

CC - I hope it was the oats that were the problem and that the recipe works well for others!

What a shame - I wonder what could have caused this? The sound of salted vanilla and white chocolate cookies sounds pretty fantastic to me.

What a shame that this recipe doesn't work well for you.

Glad that I found your blog and nice to learn all the baking tips from you. I'm now your latest follower :D

Welcome, Zoe - you have a great looking blog!

What a pity they didn't work. As you say, oats can vary a lot in how much they absorb - I sometimes wish recipe writers would be more specific. Ah well, I think I'd chalk this up to experience and make something else delicious looking instead...

It's always so disappointing when bakes don't come out as you expect or hope. Better luck with the next one.