Apple Cake with an 'Eccles' filling 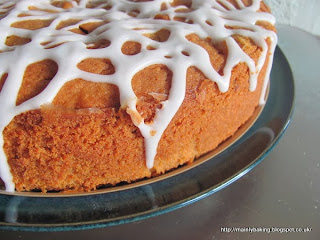 Despite the Good Food website taking liberties with the name of this cake, I really don't think I can bear to call it an Eccles Cake. The term Eccles Cake conjures up only one thing - a puff pastry  shell completely encasing a spicy currant filling; it's one of those traditional, iconic British things, like Bakewell Tarts, Cornish Pasties and Melton Mowbray Pork Pies, that shouldn't be messed with.

However, despite my misgivings over the name, this recipe made an exceedingly good cake - two layers of apple-studded cake enclosing a spicy 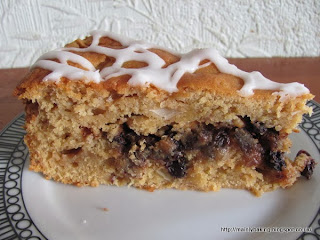 layer of dried fruits (sultanas, currants and candied peel). The cake layers were moist, but tender and light, and tasting slightly of caramel due to the use of brown sugar. The apple pieces kept their shape during cooking, adding to the range of textures in the whole cake. The dried fruit layer was spicy, sweet and buttery, with the flavour of the ground cloves and candied peel really standing out. Having said that, I know that many people do not like these particular flavours, but I think the cake would be just as good without them - perhaps adding something like cranberries instead of the peel, to keep the weight of filling correct. 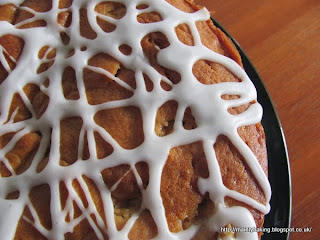 The only changes I made to the cake recipe was to use sultanas instead of raisins, and to bake the cake in a 23cm tin rather than a 20cm one - the comments on the website, about the cake, suggested a larger tin would make a better proportioned cake - and I think I agree with them. The use of sultanas was purely to take advantage of what was in the storecupboard, but I did buy the currants especially for the recipe - currants are essential for a real Eccles Cake filling. I simplified the decoration by just using a drizzle of lemon glacé icing, although I have to confess that this was partly due to not reading the recipe properly, and having neither sugar cubes to crush nor an extra lemon to take zest from!.

I am entering this recipe into this month's Tea Time Treats baking challenge. The remit this month, in the run-up to Christmas, is to use dried fruits when producing something suitable for the tea table. This cake fits the bill quite nicely, as it is full of seasonal flavours and ingredients, and I think it would make a lovely Christmas cake for anyone not completely sold on the idea of a traditional fruit cake.

Tea Time Treats is hosted alternately by Karen at Lavender and Lovage, and Kate at What Kate Baked - Karen is hosting this month and, as usual, will present a round-up post at the end of the month.
Posted by Suelle at 14:30

LOVE your very arty drizzle on top of this cake and it is a FABULOUS entry for tea time treats too! Thanks so much! Karen

A lovely looking cake, and it has great flavours. The icing makes it look so attractive. Certainly one to try, but I agree about the name Eccles cake - should be used for the genuine article.

I am so impressed that the fruit layer stayed in the middle!

gorgeous work... love the look of this!

I agree with you about the name, but what a delicious looking cake!
The filling makes it perfect for this time of year, has the nod of festive about it :)

Foodycat - I didn't spread the batter very evenly - by the time I got to the last third of the cake, the fruit layer was very near the bottom!

Apple cake around an Eccles cake filling is just spoiling me with delights. Sounds lovely. I'm with you on the name - I could never bring myself to call it an Eccles cake.

I adore the traditional eccles cake but your cake looks so delicious, and I love the sound of apple in there too. Will definitely be making this one!

Whatever it's called, this looks delicious Suelle! And I love the spiderweb icing! :)

This is my idea of a heavenly cake. On to do list, can't wait to try it out.

I would love a slice of this cake - wow. Eccles cakes are a real favourite and like the idea of using the filling as a layer in this apple cake. The icing is very effective too.

I love this cake so much - it's that little bit different to have the fruity filling. I totally agree with you as well, an Eccles cake is a pastry filled with currants!