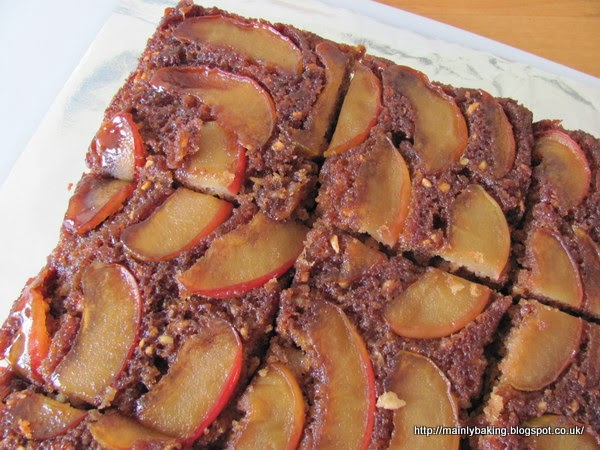 Alphabakes, a monthly challenge to bake something based on a randomly chosen letter of the alphabet, has reached the end of it's first run through the alphabet. This month's letter is U, and although I've managed some imaginative entries for other difficult letters, I can't come up with anything better than 'Upside-down' cake this time.

However, I have found a recipe which is a departure from the more common pineapple cake, although my very favourite upside-down cake is Dan Lepard's 'Stone fruit yogurt cake'. This recipe, for upside-down toffee apple squares, appears in my recipe book as a brownie recipe, but I can't bring myself to call something without chocolate, a Brownie! There is a mistake in the ingredients list of the linked recipe - it should read 175g light muscovado sugar for the cake batter, not 15g. I used 1 1/2 teaspoons mixed spice instead of the spices listed there, and also added 85g chopped hazelnuts, as per my recipe. 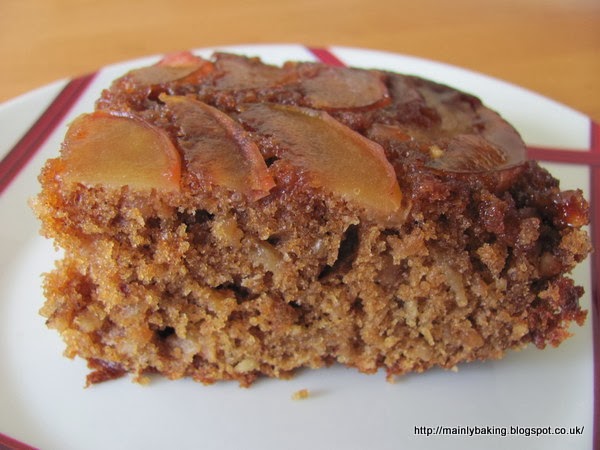 Containing two grated apples, this cake batter makes a moist light cake and is chock full of chopped hazelnuts for added flavour and texture. The fact that the squares of cake are so light also mitigates against calling these brownies. I really liked the cake on it's own, but the topping (base, before baking) of slices of apple and a butter and sugar mixture, which set as a really good toffee mixture after baking, made it even more special. I had a problem cutting through the cooked slices of apple neatly, which spoiled the appearance of some of the squares, but that's just a small niggle. 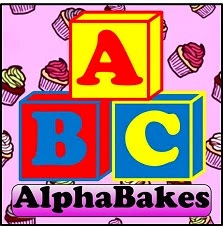 AlphaBakes (rules here) is a challenge based on a randomly chosen letter of the alphabet. The dish made must feature something beginning with that letter as one of the main ingredients or part of the name. It is hosted jointly by Ros at The More Than Occasional Baker and Caroline at Caroline Makes. Ros is this month's host with the letter U, and will feature a round-up of entries at the end of the month.

They sound good! But as you say, not a brownie!

oooh yummy... I too have just been looking for some interesting upside down cake recipes for the challenge... yours really does look beautiful... love the caramelized apples!

I love the sound of all those apples and hazelnuts! This is a very interesting take on upside down cake

That sounds good, Suelle. Love upside down cakes, and hazelnuts and apple are a great combination.

This was posted on my birthday and I have to say I would be happy to eat this as a birthday cake. I love anything with apples, although not so keen on nuts but I can leave the out. I'll definitely be trying this out.

I love the flavour combination here and I'd definitely associate brownies with chocolate. Thanks for entering AlphaBakes.

Sounds lovely! Those toffee apples look delicious (even if they were tricky to cut). Odd that the book would have called them a brownie though . . .