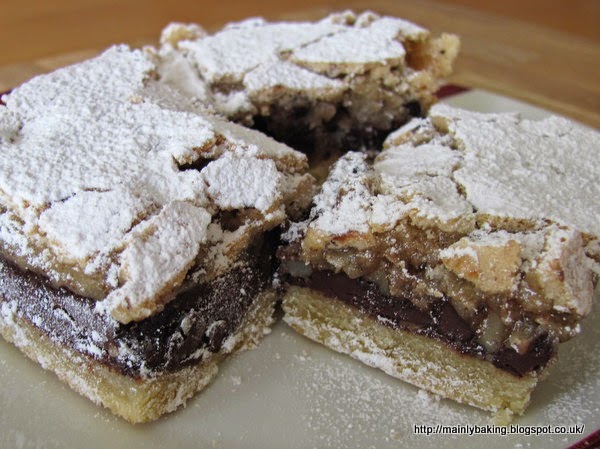 I love the challenge that AlphaBakes presents each month. The aim is to bake something that uses a randomly chosen letter of the alphabet for it's name or one of the main ingredients eg A is for apples, B is for bacon, C is for Chelsea Buns etc. What often surprises me most is the letters that prove difficult, especially when looking for ingredients. This month the chosen letter is D, and the indices of my cookery books were decidedly sparse; apart from dates, which I used last time round, and damsons (out of season), everything else consisted of titles such as 'double....' or 'delicious....' or even 'dreamy....'. Not quite what I wanted!

I eventually came across a recipe for Derby Squares, and a bit of research online told me that the recipe is based on Kentucky Derby Pie, which is similar to a pecan pie in structure, but often uses walnuts instead, and adds chocolate too. When made into a traybake, the base is made of either shortbread dough or a biscuit crumb - my recipe used shortbread.

I can't find a recipe exactly the same as the one I used, but that's probably just as well, as mine didn't turn out too well. Here's one of the nearest I found, to give you an idea of the recipe, although there was no alcohol in mine! The recipe I used came from 'Biscuits, Pastries and Cookies of the World' by Australian chef Aaron Maree, which I've used several times in the past with great success. 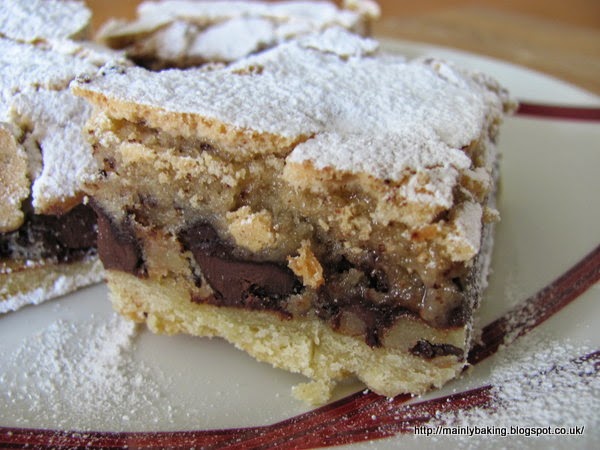 I made a shortbread dough from 210g plain flour, 60g icing sugar, 120g butter and two egg yolks, which was used to line the base of a 28 x 18cm (11 x 7") baking tin, pressing in by hand rather than rolling out the dough. The filling was made by beating 3 large eggs and 240g of caster sugar until light and fluffy, then folding in 90g plain flour, 120g melted butter, 1 teaspoon vanilla extract, 240g chopped plain chocolate and 90g chopped walnuts. The filling was poured over the biscuit base, and baked at 160C for 40 minutes. When cold, the tray bake was cut into bars and dusted with icing sugar.

The main problem with this recipe was that the top baked to a crisp meringue-like coating. It was only the very top of the filling, but it meant that as soon as a knife was applied, it cracked and looked very unsightly. I don't know whether it was the proportions of the batter ingredients that lead to this, or whether I misinterpreted the instruction to beat the eggs and sugar until light and fluffy, and beat for too long. The batter used little flour in proportion to the other ingredients, so baked to a very light, moist texture, and the added nuts and chocolate sank to give a separate layer between the base and the cake topping. I also thought (and you don't often hear me complain about this) that there was too much chocolate compared to nuts. If I made it again I would reduce the chocolate by about 50g and increase the nuts by the same amount.

Apart from all that, these really were a delicious, indulgent treat! The negatives make it sound as if I didn't like them, but I did - I just though they could be improved upon! 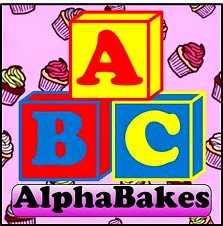 AlphaBakes (rules here) is a challenge based on a randomly chosen letter of the alphabet. The dish made must feature something beginning with that letter as one of the main ingredients or part of the name. It is hosted jointly by Ros at The More Than Occasional Baker and Caroline at Caroline Makes. Caroline is the host this month, with the letter D, and as usual will post a round-up of entries at the end of the month.
Posted by Suelle at 14:38

I've never heard of Derby cakes before, but they look mooerish x

I had a look at Derby Pie pictures on Pinterest, and they mainly do have that cracked-meringue effect on top. So I don't think you did anything wrong!

These look fantastic and I love how it formed its own crust topping. You say it was hard to cut but I love that rustic appearance sprinkled with icing sugar. So yummy

Cracks or no cracks, they sound delicious.

Hi there, I think your website might be having internet browser compatibility problems.
Whenever I take a look at your website in Safari, it looks fine however, if opening in IE, it's
got some overlapping issues. I merely wanted to
give you a quick heads up! Other than that, wonderful site!

Thanks for letting me know, although I use IE and haven't noticed any problems.

If it tastes good, it doesn't matter what it looks like! I haven't come across these before which is one reason I like Alphabakes, it introduces me to new things! Thanks for entering!