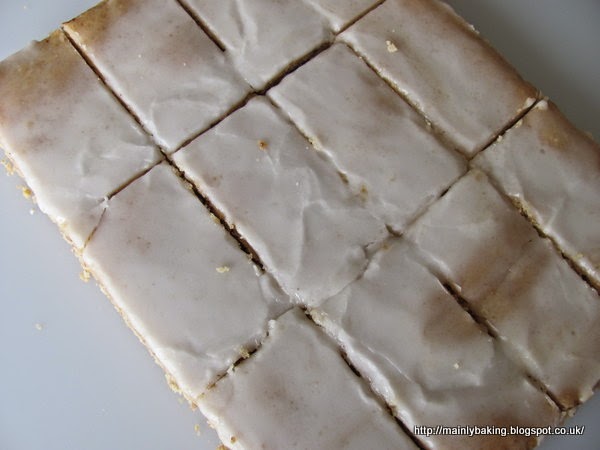 First of all, I'm going to admit that this entry for the AlphaBakes challenge is a bit of a cheat. This recipe appears in the book 'Biscuits, Pastries and Cookies of the World' (by Australian chef Aaron Maree) as Weiner Wafflen. I think there's two spelling mistakes in those two words - as nothing shows up on Google - and what he really meant was Wiener Waffeln, which translates as Viennese waffles or wafers. I can find a few German references to recipes which produce a similar biscuit to this, but the majority of references are to what most British people call wafer biscuits.

To be on the safe side, and to enable me to use them for this month's AlphaBakes challenge, I'm re-naming these as 'Viennese hazelnuts bars'. In case you haven't realised yet, the AlphaBakes challenge was to use the letter V, for either a Valentine's themed bake, or something with a name or principle ingredient beginning with V. 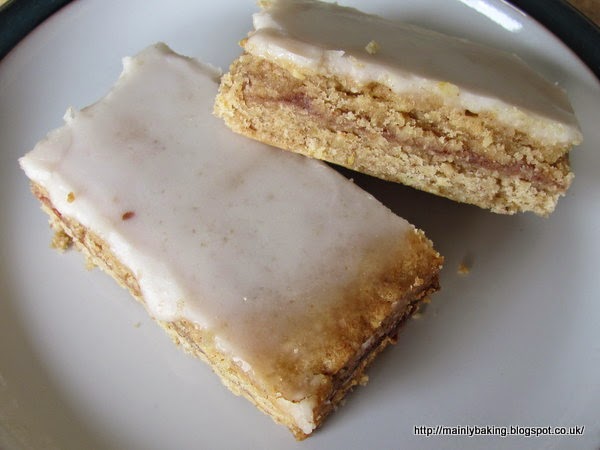 These bars consist of two layers of hazelnut biscuit/shortbread dough, with redcurrant jelly sandwiched between them before being baked. After cooling, the sheet of biscuits is glazed with apricot jam and a thin layer of glacé icing, before being cut into fingers. The biscuit dough is flavoured with lemon and cinnamon, as well as the hazelnuts, and is very similar to the pastry used for many Linzertorte recipes. It is very short and crumbly, making the bars very delicate. The filling and topping add both moisture and flavour to the bars, but the shortbread dough trimmings were also delicious when used to make plain heart-shaped biscuits (and also when sandwiched with Nutella!)

The hazelnut dough was made by creaming together 270g  softened unsalted butter and 180g caster sugar until light and fluffy. Then two large egg yolks, the finely grated zest of 1 lemon and 1 tablespoon of cinnamon was beaten in. The food mixer was then turned to it's lowest speed, and used to mix in 150g ground toasted hazelnuts and 360g plain flour. Once a dough had formed it was wrapped in cling film and refrigerated for an hour. 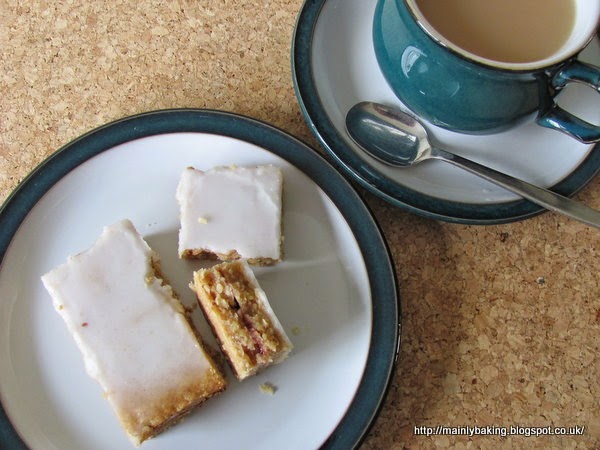 The chilled dough was kneaded lightly, then divided into halves. Each half was rolled out, to about 5mm in thickness, then trimmed to a rectangle 25 x 20 cm (10 x 8"). One layer  of dough was fitted into a baking tin of the same size, base-lined with parchment, then spread with 100g redcurrant jelly. The top layer was then put on, being careful not to trap any air between the two layers of dough, and pressed down firmly. The cookie sheet was then baked at 175C (165C fan) for 20-25 minutes until firm and just beginning to colour around the edges. 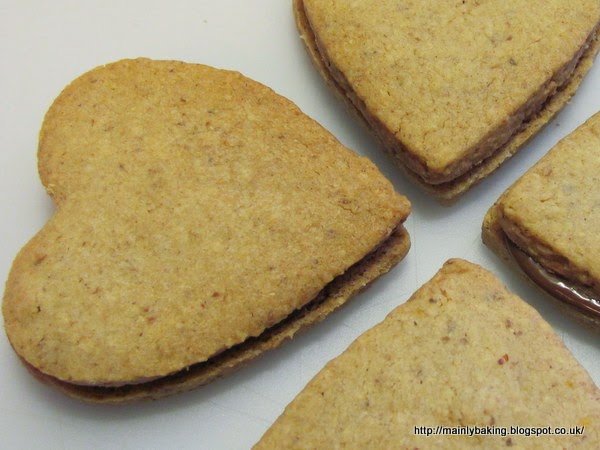 I re-rolled the trimming from the dough, and cut out heart shapes which were baked for 15 minutes, at the same temperature, until firm and golden. These were then sandwiched in pairs with Nutella spread, as a nod to Valentine's Day.

It would be worth making the hazelnut dough just for this reason, as it is delicious, and didn't spread during baking. If making a large batch of sandwich biscuits, I would make a different chocolate filling, as Nutella is a bit too runny at room temperature (or maybe it was just my supermarket 'own brand' spread at fault!).  I'd probably pretty them up with a drizzle of icing on top, too! 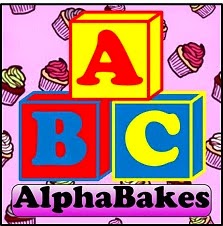 AlphaBakes (rules here) is a monthly baking challenge hosted alternately by Caroline at Caroline Makes and Ros at The More Than Occasional Baker. This month, Caroline has chosen the letter V. Entries to the challenge have to use the chosen letter as the beginning letter for either the name of the bake, or one of the significant ingredients. This month, V for Valentine's Day was allowed, which widens the scope of the challenge a bit, as V isn't an easy letter to use.
Posted by Suelle at 15:33

They sound delicious! Bet they'd be nice sandwiched with dulce de leche too.

I have to try this hazelnut dough. The bars look great and I love the heart shaped cookies especially with the nutella filling. I'm on a nutella craze at the moment. Thanks for entering AlphaBakes.

These sound a delicious tea time treat- I've always wanted to go to Vienna and sample some of the amazing delicacies!

These look good, and the hazelnut dough sounds very useful.

Love the sound of the hazelnut and the combination with redcurrant jelly is very tempting.

These sound delicious - a bit like bakewell tarts perhaps only with hazelnut instead of almonds? Thanks for sharing with Alphabakes!