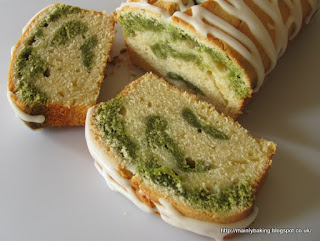 The Formula 1 Foods challenge, over at Caroline Makes, invites us to produce something that is either typical of the cuisine of the country where the latest round of the F1 GP is taking place, or is inspired by some aspect of life in that country. Baking for the Japanese race, held last weekend, proved quite difficult as bread, cakes and desserts do not play a large part in traditional Japanese cuisine.

However, Western foods are making a growing impression on the Japanese. They both adapt products to their own tastes - witness green tea or cherry blossom flavoured KitKats - and embrace a concept whole-heartedly and excel at producing it themselves. The range of bread and pastries available in department store food halls and specialist shops, ranging from baguettes, through almond croissants to tartes aux fruit and chocolate gateaux is some of the best I've seen (and tasted) outside France. 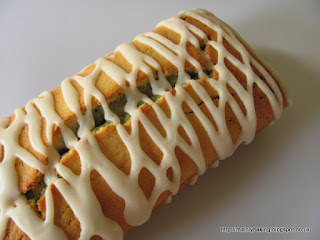 As I couldn't bake something Japanese, I decided to reverse the concept again, and bring popular Japanese flavours into something quintessentially British - the Madeira cake! I followed the traditional Madeira recipe - 175g each of butter and caster sugar, 3 eggs and 250g SR flour - and added 3 tablespoons of yuzu juice. Then I removed about 1/3 of the batter and stirred in 2 teaspoons matcha (green tea powder), to give a quite vividly coloured batter.

The two batters were layered into a 2lb loaf tin, starting and ending with the plain coloured batter, The cake was baked at 170C for 55 minutes, or until a test probe came out clean.
After the cake was cool, I made a thick glacé icing with icing sugar and 1 tablespoon yuzu juice, and drizzled it over the cake. 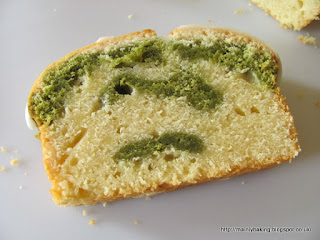 I made a few miscalculations about how much batter to use when building up the layers and ended up with a large green layer near the top of the cake, I also expected the two colours of batter to swirl naturally as the cake baked to make a classic marble cake, but this didn't happen, so the cut cake looks a little strange. All I needed to do was run a chopstick through the batter to swirl it myself - I'll know better next time!

The flavour of the cake was quite delicate, as befits a Madeira cake, which is usually only flavoured with a hint of lemon, and the slight bitterness of the green tea was a good contrast to the sweetness of the rest of the cake, especially the icing, where the flavour of yuzu was much stronger.

that looks truly wonderful... love the colours and adore that giant crack down its back!

What a clever idea; it looks great.

This looks lovely - great idea! Thanks for sharing with Formula 1 Foods!

This is such a pretty cake. I'm a real sucker for matcha as I'm sure you know. Not tried using yuzu though.