This weekend's challenge for Formula 1 Foods, over at Caroline Makes, is to produce food inspired by the cuisine or culture of Russia, to coincide with the Russian leg of the Formula 1 Grand Prix. I wanted to cook something which would fit in with my meal plans and not be too fiddly, or involve the expense of buying special ingredients, and I was pretty sure that I could find something in Russian traditional cooking to fit the bill. In the end, after discounting cakes with 15 layers, recipes which used whole jars of honey, and anything based on yeast dough,  I found two suitable recipes, both of which used simple everyday ingredients and methods. One was a savoury potato and cheese dish called Kartoshnik and the other was Sharlotka, sliced apples cooked in a sweetened egg-rich batter to make a cake or pudding. I decided to cook them both and have a meal inspired by Russia.

To be honest, I have my doubts that Kartoshnik is a traditional Russian dish. It's mentioned frequently on recipe websites, but there only seems to be one recipe in circulation. Usually traditional dishes get tweaked by generations of cooks, or regional variations in ingredients, so just one recipe, with no variations, suggests an invention by one cook, which has just spread by online repetition. However, it was surprisingly tasty, so if it hasn't been eaten  by past generations of Russians, it deserves to be enjoyed by those in the future.

Kartoshnik is a dish meant to accompany a meat dish, but in view of the amount of eggs and cheese used, I decided to treat it as a vegetarian main meal. Cooked mashed potato is mixed with eggs, onion, cheese and a little cream, with some baking powder added to lighten the mixture. When baked it becomes something like a quiche filling, both in taste and texture, so it was quite good as a main course. According to the recipe it is traditionally served with sour cream and chopped green(spring) onions, but I served mine with cabbage cooked with onions, apples and caraway seeds, which felt quite Eastern European to me. 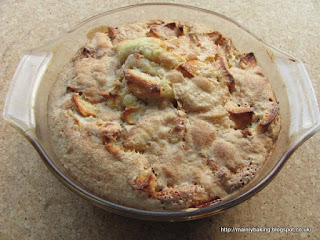 Following this online recipe, I mixed 4 eggs, 75g grated Cheddar cheese, 75g mature Gouda cheese (in place of swiss cheese), 80mls double cream, a grated small onion, 1 teaspoon salt, 3 teaspoons baking powder, then stirred in 450g cooked and mashed potatoes (weighed after peeling). This mixture was spread into a 9" square greased baking dish and baked at 200C(fan) for about 30 minutes until golden brown and set. As the dish was removed from the oven, I brushed the top with a knob of melted butter, rather than serve with the larger amount of butter suggested.

For dessert, I followed this recipe for Sharlotka, which baked the batter in a pudding dish. This wasn't entirely successful, as the depth of my baking dish meant that the dish took over an hour to cook properly. With the benefit of hindsight, it would have been better to use a larger, shallower cake tin, and serve the Sharlotka as a cake. Considering that the batter ingredients were just plain flour, sugar and eggs (with a 1/4 teaspoon baking powder, as suggested by some other recipes I looked at), I had no idea what the texture of the cake was going to be like. A sponge? a clafouti? a pancake? In fact, it was most like a dense sponge in texture, quite sweet but very plain and a good carrier for the sharp eating apples used in the recipe. When first baked, it had a crisp sugary crust, but this softened with time. I served the cooled cake with vanilla yogurt.

Although both these dishes are quite high in carbohydrates, neither of them seemed very heavy, so it didn't seem too much to serve them both as part of the same meal. The leftovers from the Kartoshnik were eaten with a chilli the following day, and suited that quite well too.

I read somewhere that under communism a lot of traditional recipes were lost, because the whole Soviet Union was issued a single approved cookbook. If that is true, it could explain why there is only one recipe in circulation!

I didn't know that! As you say, it would explain why all the recipes are exactly the same.

We now have Russian neighbour and she mmakes Sharlotka. Will ask her about the recipe as she probably used the same cookbook! I like the Katroshnik recipe - it's good to have some non-meat recipes to make.