The writer of the blog where I found this recipe calls it a 'Lazy Girl Cake' but at this time of year I'd also call it a cheapskate's cake, as you can often find mincemeat being sold off cheaply to get rid of seasonal stock. I found double-sized jars (820g) in Waitrose for only 60p!

Phil at As Strong as Soup directed me to the recipe here, on the English version of C'est Moi Qui L'ai Fait! but I also found it on this site, which claims that it originates in a National Trust recipe book. Whatever it's origins, I adapted the recipe a little, for my own tastes, using chopped prunes instead of sultanas and adding the zest of an orange to compliment the fact that there were quite a lot of citrus-y ingredients in the mincemeat. 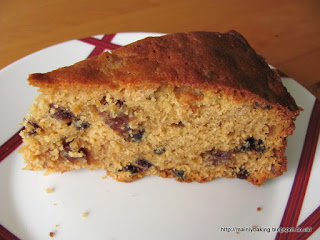 Method
Pre-heat the oven to 160C and prepare a 20cm(8") or 23cm(9") loose-based cake tin.
Put the butter, sugar, eggs, orange zest and half the flour into a mixing bowl, and beat until well blended, and light and fluffy - easiest with a hand-held electric mixer.
Fold in the rest of the flour, the mincemeat and the chopped prunes.
Transfer the batter to the baking tin, and bake until a test probe comes out clean - it will be roughly 90 minutes for the 20cm cake and 75 minutes for the larger cake which will be more shallow.
Cool in the tin for 20 minutes, then transfer to a wire rack.

This is a gently flavoured cake - the usual spiciness of mincemeat is diluted by the cake batter, and adding orange zest increases the citrus notes. Obviously, the flavour will vary depending on the mincemeat used - mine didn't contain nuts or alcohol! The prunes were the biggest pieces of fruit so stood out in both the appearance and taste of the cake. Again, this is a factor that can be varied to taste - I considered dried apricots and cranberries before going with the prunes.

This is such a simple way to make a well-flavoured light fruit cake that I'm sure I'll be using it throughout the year - I've got quite a bit of cheap mincemeat to use now!

i'm loving all these left-over mincemeat recipes and this one sounds particularly glorious. Love the addition of prunes too x

A double-sized jar for 60p has made me jealous - the best I've managed is a standard jar for 49p. I must admit that mincemeat is becoming the flavour of January rather than December for me. Very good idea to add the prunes - they should be used so much more often in cakes.

I've made this too, Suelle, thanks to Phil, and it was so moist and tasty. Like you say, there are many variations you could make to the recipe.