for We Should Cocoa 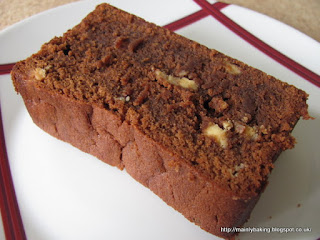 My first (and only!) idea was to use malted milk powder in a chocolate cake, so I bought an individual sachet of Horlicks; it was then that I found that most recipes used upwards of a quarter of a cup of malted milk powder - more than I had.

After a lot of searching, I found two versions of a Peyton and Byrne cake on two of the blogs I read regularly - Tin and Thyme (a fitting coincidence) and The More Than Occasional Baker - which only used a tablespoon of malted milk powder, so I used this as my starting point. The sachet of Horlicks I had looked as if it contained about 2 tablespoons, and I used 40g of malt extract in place of 40g of the dark muscovado sugar in the recipe, to increase the maltiness. In the absence of any milk chocolate in the storecupboard, I used white chocolate.

I followed the method in the recipe I found on The More Than Occasional Baker, as it was so unusual that I thought it must be nearest to the original. It might have been that my loaf tin was too short and deep, but I found the cake took 60 minutes to cook, rather than the 35-40 minutes suggested in the recipe (something Choclette at Tin and Thyme found too). 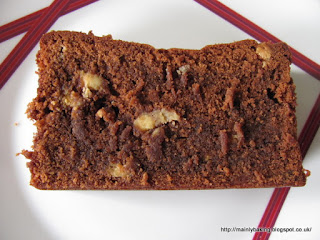 Method
Preheat oven to 170C and line a 2lb loaf tin with baking parchment.
Combine the sugars, malt extract, flour, salt and malted milk powder in a large bowl.
Add the butter and beat with a hand-held mixer, on a slow speed, until evenly combined.
Add the egg and vanilla extract and beat until light and fluffy, then beat in the melted chocolate and milk until evenly combined.
Stir in the white chocolate pieces and transfer the batter to the baking tin.
Cook until a test probe comes out clean. The original recipe suggested 35-40 minutes, but my loaf took 60 minutes.
Cool in the tin for 15 minutes then transfer to a wire rack to finish cooling.

I really liked the flavour combination of malt and chocolate, but this particular recipe really didn't work out very well. Although the loaf seemed to rise well in the oven, it sank a lot while cooling and became quite dense. It also dried out a bit around the edges, due to the longer cooking time.
Posted by Suelle at 14:26

Suelle, you've reminded me just how good this cake was. I'm going to have to make it again. Your idea of adding malt extract is inspired. My mother makes a mean malt loaf, but I hardly ever think to use it. Thanks for joining in with We Should Cocoa.

ps I have to say I've found all the recipes I've tried in my Peyton and Byrne book a bit on the flakey side. Good ideas, but I'm not sure how well they've been tested for the home cook.