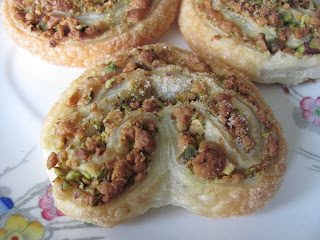 I have to admit that this was more of an assembly job than a real baking session, but these puff pastry biscuits were a lovely treat over the Easter weekend. I also have to admit that I chose the recipe to use the last of the Christmas marzipan, which had been stored, well wrapped, in the fridge since I made these Mincemeat and Marzipan Squares a month ago.

The recipe was in this feature on Easter baking, in the Guardian newspaper. There are a few points to note when it comes to assembly - the nut mixture needs to be firmly embedded into the pastry (I found it best to press down with the rolling pin rather than roll), and I felt that a longer chilling time would have made the roll of dough easier to cut. Unfortunately I didn't have more time at that stage as I needed the oven for the joint of lamb we were having for dinner. I baked the palmiers at 180C fan (200C conventional) as the temperature given in the recipe seemed a bit low for cooking puff pastry in a conventional oven. The palmiers still took the full 20 minutes to bake to a light golden colour, so my decision to raise the oven temperature seemed correct. 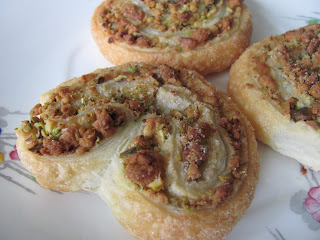 These are best eaten the day they are baked; the pastry wasn't quite so crisp the next day. Comparing my photos to the illustration with the recipe, it looks as though I should have processed the nuts and marzipan to a finer texture, but I liked the crunch of some larger pieces of nuts.
Posted by Suelle at 11:15

I like these. Palmiers are useful to make as you can make so many different fillings.